MLS vs Supporter's Groups: Beyond the YSA Chant, Part 1

A two part series looking at the relationship between MLS, its clubs and their fans.

Share All sharing options for: MLS vs Supporter's Groups: Beyond the YSA Chant, Part 1

As the only contributor that's an active member of a Supporter's Group (SG) I have been asked about my opinion on MLS and a few club's attempts to stop the "You Suck Asshole!" (YSA) chant at games. I want to start by saying that this is my opinion on the YSA chant and in no way reflects the official opinion of the Dallas Beer Guardians leadership. To be honest I don't know what we would do if the FO and MLS tried to shut our chants down and as of right now they have not attempted to. For those who somehow missed the most recent dust up here's the letter sent to Real Salt Lake SG's a few weeks ago that restarted the debate on the chant. 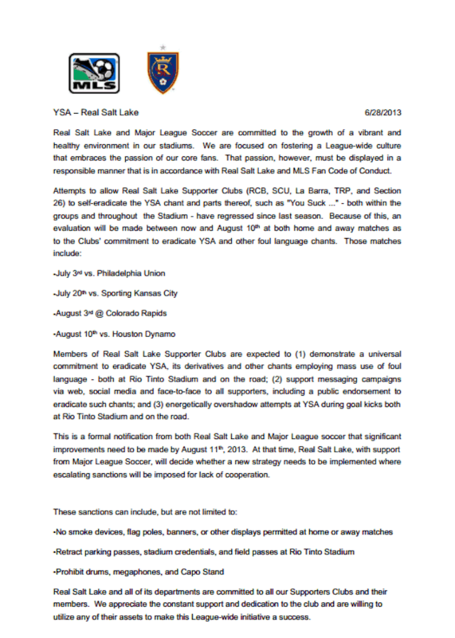 I can't encourage you enough to head over to RSL Soapbox and read Jake Simons' (a member of an RSL SG) take on this letter. I don't necessarily fall in line with his thoughts about stopping the chant but his reasoning is solid and his breakdown of why MLS wants to stop this are dead on.

Then about a week after RSL handed out their letters, NYRB made an offer to their SG's. 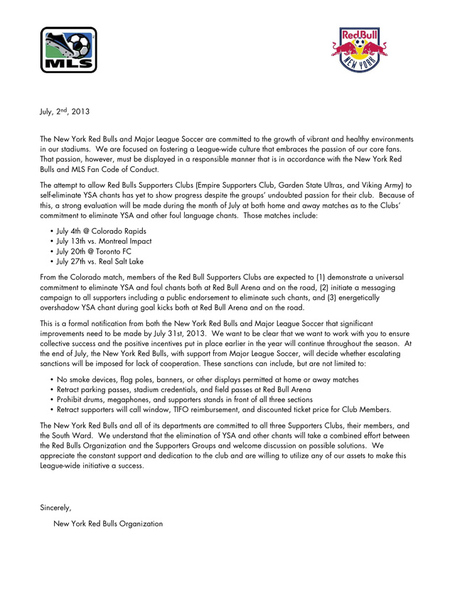 I've heard so many times that "YSA is a stupid chant anyways!" Let's be honest folks a lot of the chants that SG's sing during the game (and we all do pretty much the same chants) could be considered "stupid". To use that as a justification to not do it is.....well...stupid.

I understand why MLS and club FOs don't want cursing being yelled in unison. Some people consider it offensive. Children could hear it. It turns potential fans off. I've heard all the reasons. Again I think that Jake Simons hit the reasons MLS wants it stopped right on the head. What bothers me is that I don't want to be told what I can and can't say. I don't want to be threatened with expulsion or revocation of my season tickets because I told Joe Cannon that he's an asshole, especially because I sit in a 21+ section.

To that point, it's a bit of a different setup at FC Dallas Stadium than a lot of other stadiums. The Beer Guardians sit in an area that is segregated from the rest of the seats in the stadium and doesn't allow anyone in that's under 21. Yes kids could still hear curse words yelled out from our area, especially if they are in unison. That said, I sit in that area for a reason. Because I'm a loud supporter of all my teams, I don't want to be sitting around a bunch of children at any sporting event. I don't have kids of my own, so for me, all I have to do is avoid everyone else's kids. The Beer Garden allows me to do that.

While I don't like that the RSL and NYRB FOs are threatening their fans over use of foul language, there is another part of each letter that really gets under my skin.

In RSL's case the letter notes that RSL Supporter's Groups must:

(2) support messaging campaigns via web, social media and face-to-face to all supporters, including a public endorsement to eradicate suck chants...

And from the Red Bulls letter:

(2) [SG's must] initiate messaging campaign to all supporters including a public endorsement to eliminate such chants...

......excuse me? You want to stop the chant? Fine. You want to improve the atmosphere at games for all attending? Okay, I get it. You want to start telling fan run Supporter's Groups what they HAVE to do with their own social media accounts? Now we have a problem in my eyes.

With this caveat MLS, NYRB and RSL have crossed the line. The clubs (and the league) have a right, no matter how infuriating it is, to tell people what they can and can't say while in their facilities. They also reserve the right to kick people out, revoke tifo privileges, and ban drums. What they DON'T have a right to do is tell fans what they must do with their own social media accounts. This is a gross overstep of authority and an abuse of power in my eyes.

I pose this question: If a general fan (non SG member not sitting with an SG) gets in trouble for throwing out f-bombs, can the team then force that person to go on their personal Facebook or Twitter account and post propaganda from the front office as a condition of reentry? Where does it say that on your ticket? Where does it say that in the MLS Code of Fan Conduct? Most importantly where does the line get drawn between stopping curse words and forcing people to post things on social media?

Chad Loveland at RSL Soapbox has a gem of a quote that sums my feelings up best:

This is big brother telling us you will do as you’re told and love big brother because it is not enough to obey him, you must love him. No thoughtcrime is allowed in Big Brother’s stadium.

I know you think this is an over-reaction. It is not.

So what is the Red Bulls solution to the YSA scourge? Bribery.

This approach was intriguing to me. Don't do the chant for 4 games (3 really. I mean who made the trip from NY to CO?) and we'll give you $2k in a fund to do what you will.

I really don't know how to feel about this. To a degree it's insulting to have money waived in your face to be quiet but I also know how much road trips, game day festivities, and especially tifo can cost a group. I can't speak for NYRB groups but it's incredibly tough on groups like the Dallas Beer Guardians who don't charge for membership or food/alcohol at the tailgates and depend on donations to help cover costs. The lure of a nice chunk of cash for every 4 games the chant isn't done must be a strong one. From what I've read all but one of the NYRB SG's agree to end the chant. The one that didn't? Garden State Supporters or ULTRA GSS made it very clear how they felt about the NYRB's idea.

** Attention all GSU brothers and sisters **

A decision has been made regarding the future of our club. From this day forth GSU will not be accepting a single penny from the FO or Redbull. This of course will result in a lot of friction between us and the FO. But we stand strong together. This is our club, our city, our family. We will not be censored, we will not be bought

During these trying times all we ask of you is to come hard. Come out, support your club and hold your head high and sing loud! It is recommended that all GSU members wear a bandana or some face cover for the upcoming games. As we all know the FO is on the lookout for "inappropriate" language and behavior. We say fuck them! We will not be censored.

As far as YSA go’s, we think its a lame ass chant but, if you feel the need to do it to let the FO know there pieces of shit have at it.

United we stand divided we fall!

Well that's certainly a clear stance. One I don't fault them for.

Earlier this year Seattle Sounders fans received a nice little flyer when they arrived at a game. 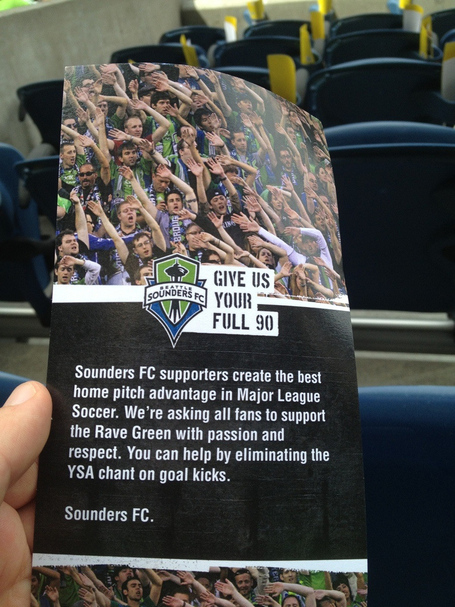 The most infamous case of a club taking extreme measures to stop the YSA chant happened two years ago in New England that ended in 2 arrests and 20 bans from Gillette Stadium. Steve Stoehr at The Bent Musket had the coverage a few days after the incident. Make sure to read his full account of what happened. There is also video of one of the arrests.

Fans made note of the increased presence of police and TeamOps staff around the Fort early in the match, but it wasn't until later that the situation escalated. Monty Rodrigues, former long-time president of the Midnight Riders, was verbally abused by TeamOps staff while standing as capo in the second half. After being twice berated - with profane language, mind you - by security/TeamOps representatives and being accused of leading offensive chants and inciting a riot, Monty threw up his hands and walked out of the Fort.

Keep in mind that capos are told in no uncertain terms not to swear, because otherwise the megaphone will be taken from them. I've been to games, I've sat in the Fort, and I don't remember Monty swearing or leading chants with profanity, unless it was added by the supporters.

At that point, TeamOps, security and police descended on the Fort with what seemed to be extreme prejudice. This is stuff you can see in the TV broadcast of the match. "They came down like they'd had a pep talk from Knute Rockne," recalled Santos. Fans were removed forcefully from the Fort, and even those who peacefully and unassumingly followed Monty out in protest were randomly grabbed and, in some cases, arrested for it. In the video below provided by a supporter in the area, you can clearly see a fan offering no resistance as he is arrested for, to quote the Foxborough police officer cuffing him, "being a f*****g dickhead."

Again this points to the question: Where do we draw the line? What is more harmful to MLS: Groups doing the YSA chant or setting an example to casual fans that you could be arrested if you say the wrong thing?

In Part 2 of this discussion, I'll look at how MLS uses SG culture to promote the league and the fine line that SG's are forced to walk at times in order to support their clubs.