Salt Lake is winless has never won in the Lone Star State.

A head on the ball. FC Dallas leads MLS this season with nine goals scored off of headers. Salt Lake has given up three goals off headers this season.

First half goals against. FC Dallas has given up five goals this season in the first half, good enough for second-best in MLS. FC Dallas has yet to allow a goal before the 16th minute. RSL has allowed four goals before the 15th minute but zero between the 16th and 30th.

Injuries, international call-ups and a suspension. That is what RSL is going to be dealing with tomorrow when they come to Frisco. The thing is head coach Jason Kreis has prepared his club with the use of his team's depth this season to handle such a thing.

RSL was hit pretty hard though this month with those three things. Lovel Palmer was red carded in last week's game at Rio Tinto Stadium against Philadelphia, so he'll be out tomorrow. Alvaro Saborio, Nick Rimando, Kyle Beckerman and Tony Beltran were all called up for the CONCACAF Gold Cup, so they're all out. Then there are a slew of injuries to the defense.

Still, with all of that RSL keeps humming along here this season. They're 7-1-2 in their last 10 league games and have been on an absolute hot streak ever since Javier Morales returned to full strength in their lineup.

Salt Lake is a possession hungry team. They typically dominate games with their possession and ability to spread out their attack. They've had 11 different scorers this season (same as FCD), but four players are currently tied for the team lead with four goals.

The big thing that Salt Lake does well is creates chances off their possession. RSL leads the league in shots on goal with 107, 12 more than the next club in the category (LA). They do a lot with the ball and they've done well on defense with various defenders in the back four this season.

Kreis has a few choices that he'll have to make for this weekend's game. Look for Kenny Mansally to start in the back along with Homegrown defender Carlos Salcedo. 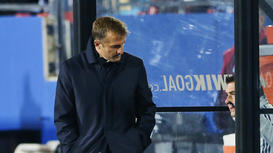 Brian checks in with SBN blog RSL Soapbox to get the scoop on tomorrow's opponent.

Strong game from Cooper. Speaking of Cooper, he has to have a big game in this one. He's been cold lately like most of the club but that also means that there is a chance he can break free from the bad form. He'll be starting up front in place of Blas Perez (international duty for Panama), so the chances will be there for him if he can find himself in the right spot.

Wide game. Dallas has the speed on the wings with Jackson, Fabian Castillo, Je-Vaughn Watson and Ramon Nunez. But all four, whoever is out there tomorrow on the wings, have got to have a strong game in space. RSL is a team you can spread out easily and get good chances from a wide area on. All four of those guys need to have big minutes on Saturday and play as well on offense as they do on defense.

Free David. One thing Dallas has to do is allow David Ferreira the space that he needs to create in the attack. But at the same time Michel and Andrew Jacobson (and maybe even newcomer Erick) also need to alleviate any pressure on Ferreira from RSL.

With history on FC Dallas' side against RSL at home, I feel better about this game than I have for the last few. But at the same time, RSL has been hot and will make this one interesting even without their key players that are missing. Like all of you, I want to see this team show that they can pull a game out again against a good team. I'm just not convinced yet that it will happen this weekend. Still, I think a draw is highly likely in this game though.

(What say you? Put your predictions and comments on tomorrow's game below)