Should Ramon Nunez be starting over Jackson?

Share All sharing options for: Should Ramon Nunez be starting over Jackson?

The dreaded slump that inevitably hits (most) MLS squads seems to be in full effect in Dallas. FC Dallas hasn't won in league play since May 25th, haven't scored a goal in the last 180 minutes, and have lost two of their last four matches to Western Conference contenders.

While there's plenty of blame to go around on this team, one glaring issue to me has been the poor performance of Jackson. Since starting out the season red hot, Jackson has scored no goals in league play since his goal against DC United in Frisco on May 11th and has one assist in that time which came on June 1st in Colorado. With Ramon Nunez finally healthy and contributing off the bench is it time to sit Jackson in favor of FCD's new number 9? Let's look at the numbers.

Admittedly it's a little tough to compare a guy who's played 1502 minutes to a guy who's only played 74 minutes but I'm going to give it the old college try anyways. Let's look at their 2013 stats as of today:

I would like to take a look at three specific games that both players had minutes in: 6/22 Sporting Kansas City, July 4th Chivas USA, and July 7th in Los Angeles against the Galaxy.

The late comeback against SKC to steal a point back at home has so far been the thriller of the season. This game saw Jackson play the full 90 minutes on the right wing while Nunez came on for Castillo on the left wing in the 74th minute. Let's take a look at both players Heatmaps. 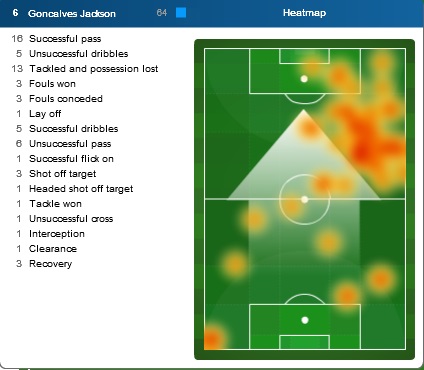 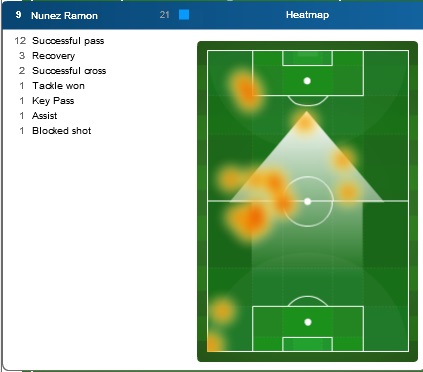 While 72.7% passing for Jackson is certainly nothing to scoff at it should be pointed out that Ramon was 100% for passing and supplied the game tying assist in the 93rd minute. To be fair though Nunez only played 16 minutes, compared to Jackson's 90, and more than likely wouldn't have been 100% in passing over the full 90. For me the biggest issue for Jackson has always been his atrocious first touch and his tendency to lose the ball in one on one contests. Thirteen lost possessions is NOT a great performance by any means, however when looking at the team across the board Jackson was surprisingly only 4th in possessions lost behind Jacobson (14), DF10 (15), and Zach Loyd (17). When taking a look at that list many could argue that all 4 of those guys have underperformed this year and while FCD ended up getting a 2-2 tie, 13 lost possessions from tackles didn't help at all.

The key difference between the two players performance for me was that both players had three passes into the box during the game and the results couldn't have been more different. Nunez was 3-3 including the game tying assist on a cross while Jackson was 0-3 on the night and only had 1 cross that was unsuccessful. Your winger becomes quite useless if they can't make things happen in and around the box and as of late Jackson hasn't made anything happen inside of 30 yards.

Let me start by saying that NOTHING about this game was good other than the fact that FCD didn't lose to the worst team in the Western Conference. If ever a tie has felt like a loss this season it was by far this game. Jackson played a total of 87 minutes in this game before being subbed out (15 minutes too late in my opinion) for Eric Hassli, while Nunez replaced Kenny Cooper in the 64th minute on the left side of the midfield.

The heat maps are intriguing: 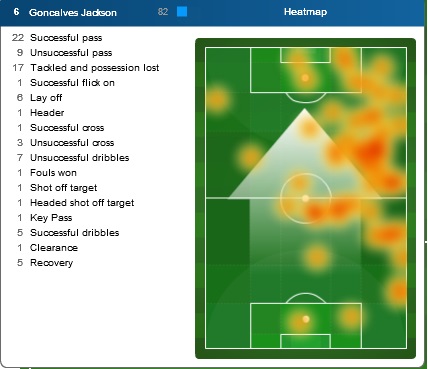 While concentrated on the right side for most of the game Jackson showed his tendency to drop back into defense and take himself out of any possible counterattack. I don't know if this was due to his own lack of focus or just a symptom of what was an overall bad team performance. 70.9% passing isn't bad but 17 lost possessions from tackles (tied for 1st on the team with Blas Perez) is inexcusable. Add that to 1 out of 4 crosses being successful and only 5 for 12 successful dribbling and it's an overall miserable game for the Brazilian. 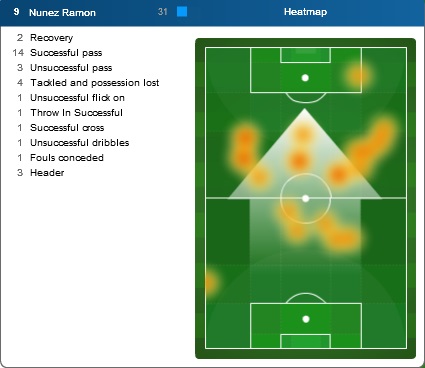 This is what I want my attacking midfield players maps to look like. Yes it's a little scattered from what you would hope from your left winger (although didn't he switch sides at one point?) but I think it shows smart movement and a player that knows his role on the pitch. One more thing that jumped out to me is that Nunez's work rate was much better and efficient than Jackson's. While Jackson played over three times the amount of minutes that Nunez played (87 compared to 26) he wasn't even able to double the amount of passes, successful or not, that Ramon had.

Another ugly game for sure but maybe the best game to compare Jackson and Nunez as neither one came onto the pitch until the second half. Jackson came on directly after half time for Je-Vaughn Watson on the right wing while Nunez came on in the 63rd minute as an offensive sub for DMid Andrew Jacobson, which moved the team into a 4-4-2 diamond formation.

I think that this was probably Jackson's least effective game of the last two months. Let's take a look at Jackson's ball distribution over the last 45 minutes of the LA game. 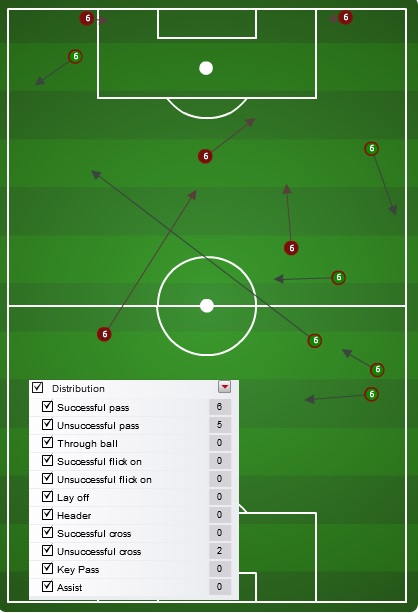 Jackson made 3 passes and 2 crosses towards the box and none of them were successful. His possession of the ball was, believe it or not, worse. 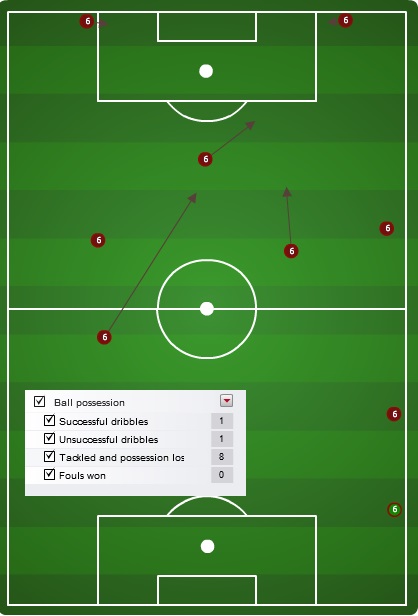 I mean....just....wow.... 54.5% passing on only 11 total passes and 8 balls lost on head to head battles. I know that wingers aren't necessarily always possession guys but what do you have to offer if you can't posses or successfully send balls into dangerous areas?

Compare those numbers to what Nunez did in only 27 minutes of play. 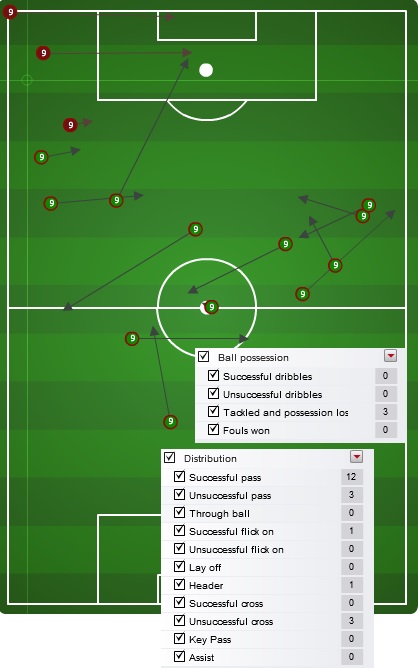 While all three of Nunez's crosses were unsuccessful, the telling thing to me is that even though Nunez played 40% fewer minutes he still managed 3 more passes than Jackson and did it with an 80% success rate.

With such a difference in output between the two midfielders over the last two months you have to wonder why Jackson is still being preferred over Nunez by Schellas Hyndman. In my opinion this may just be another case of SH being afraid of change.

I want to know your opinion on this topic! Has Nunez shown enough to be in the starting XI over Jackson? Does Jackson still deserve to be the starter because of his strong showing at the beginning of season? Let me know what you think.