Was it bad? Was it good? Figuring out what exactly Je-Vaughn Watson brought to the table last night.

Share All sharing options for: Scratching The Chalkboard: Reviewing Watson's Performance Against Portland

Not many of you wanted to see it happen last night. But when injuries pop up sometimes having a guy in a spot that he isn't comfortable in can work. Luckily for FC Dallas, when Schellas Hyndman started Je-Vaughn Watson in the center of the midfield last night against the Portland Timbers, the result wasn't that bad...or at least bad enough to cost the team points at home.

It truly was a tale of two halves for the midfielder from Jamaica. He looked good in spots in the second half after being a complete waste in the first half. Thankfully for us there is plenty to go on as he played the full 90 last night instead of coming off the bench like we've seen in recent weeks.

Early in the game you could sense some carelessness out of Watson as he was pressing and running a bit more than he possibly should but when the game got late, it seemed to settle down for him.

"I think in the beginning we were a little anxious, but sometimes the best games are the ones that get later," said Hyndman. "When people start to slow down, they start to just think instead of run."

Judging by his Chalkboard from last night, in defense and possession Watson wasn't that bad. Then again there were a lot of balls that he didn't get either. So in a way his stats are a tad mis-leading in my book

Defensively he made a couple stops, not nearly as many as you would want out of someone in that position. And certainly a big drop off from what we've seen out of Andrew Jacobson when he's been out there. 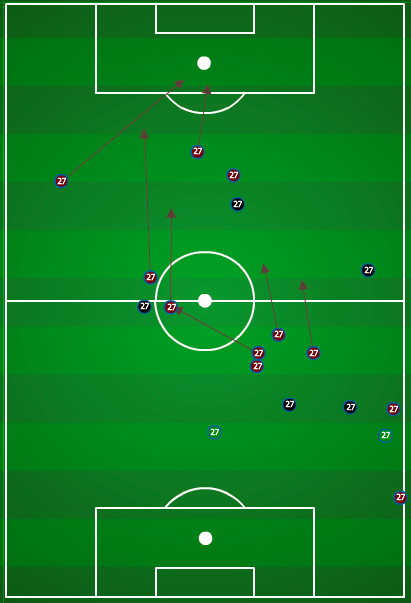 The purple marks with the lines drawn from it are the times he gave up the ball in possession. A grand total of 11 to be exact on the night. Pretty even between the two halves too as he actually gave it away more in the second half than he did in the first. Most of those second half giveaways were late in the match when FC Dallas was pressing for a go-ahead goal.

His passing on the evening wasn't all that bad though. The times he was given space he did help open up the attack to guys like Kenny Cooper and Fabian Castillo. I said it many times last night that when Dallas got the ball wide, good things happened. 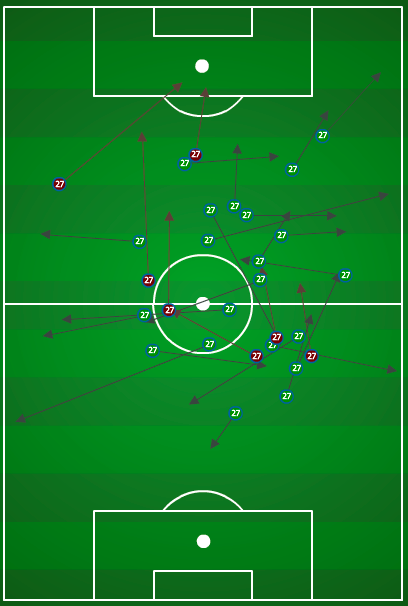 Most of his bad passes (7 total) were in the offensive end. To me that is an okay thing to have as the club was pressing late for a goal. In fact he had only ONE bad pass in the first half. I'll take it.

As for the 27 successful passes on the night, a lot of them tend to go backwards, which is not something you want to see as much here. I'd rather see more passes go wide in a game like this when you are trying to spread out a quick team like Portland.

Thankfully he did have several successful passes to the wings with a majority of them late. When he found Cooper, Castillo, Eric Hassli and Blas Perez, things happened. That is what you want to see here. The pressing he helped do late in the game did lead to the penalty for Perez. Watson was instrumental in getting the ball wide to Cooper on the play that saw Perez being dragged down in the box.

Space was open for Watson to be more of himself in the second half. I think if anything he could be a guy that Hyndman could turn to in late situations should David Ferreira need a sub. I know we have Ramon Nunez coming back as well so competition for that backup role is definitely on in my books.

Watson is a guy that is good in the attack but defensively he lacks the ability to track back and win balls in space. Last night it was pretty evident how much the club needed a ball winner. Many wondered why Hydnman took out Michel for Bobby Warshaw instead of Watson, it was simple, really, Michel was carrying a little bit of a cold. Watson was actually looking good at the time of the sub and it was a smart call to make. Warshaw came in, won some balls in the midfield and kept things going forward for Watson and the rest of the attack.