Timbers come to town with a solid 3-1-5 record on the season.

Get ready for a big week of games folks. First up for FC Dallas is the Portland Timbers, who come to town this evening. FC Dallas is back on the field after a 10-day layoff that certainly helped matters out after the 2-2 draw in Vancouver that saw both George John and Andrew Jacobson go down with injuries.

No word yet on if either will start tonight, my gut feeling tells me we'll see one or the other but not both tonight. The two games this week complicate the matter a little more for Schellas Hyndman.

Portland comes into this match off a 0-0 draw to the New England Revolution last Thursday. Caleb Porter's club is 3-1-5 on the season and like FC Dallas has not lost a match since Week 2. This will be the only visit by the Timbers this season to Frisco as FC Dallas has to travel in June and August to the Rose City.

Two games to test iron men. Currently, FC Dallas has two players left that have played every second of every game this season. David Ferreira and Zach Loyd are those two players and this week will certainly put that streak to the test. I think it is very impressive to see that DF10 has been apart of each game this season, we certainly have written lots on this space as to how important he is to the club. Loyd is pretty dang important as well, the fourth-year starter for the club has typically done well at playing lots of minutes for the club since he became a regular starter.

Strong defense early. FC Dallas is the only MLS team that has yet to give up a goal in the first 60 minutes of a game this season. Yeah. Impressive. Now if only they can keep that going and find a way to lock down that final 30 minutes of the game, they'll be all set here.

More: Injury Report Where to Watch BDS News Update May 8

The Timbers are the only club in MLS this season that have picked up points in every road match this season. To put it another way, 'they ain't scared to come here'. They've tied all three of their Western Conference road trips so far this season. Those games included a trip to Seattle, Colorado and San Jose.

Portland comes into this game looking very strong despite some injury issues in their defense. Mikael Silvestre went out of last week's game with New England with a MCL injury, he'll be out for the next six to nine months. He joined fellow defender David Horst on the sidelines.

The Timbers are starting to play right into what Porter is preaching with his high pressure, high possession style of play. Once Porter made a couple roster moves with his lineup, like moving Rodney Wallace from the defense to the attack and Jack Jewsbury from the defensive midfield to a full back spot, things appeared to open up for his club. Diego Chara became more free in the midfield and Will Johnson started to open up things more in the attack.

Dallas will need to retain as much possession tonight against the Timbers. Spreading them out will also help matters out as teams that have done that this season have found some success.

Porter's lineup should resemble what we had late in the game against New England once Silvestre went out. In will come Andrew Jean-Baptiste, which could be a spot for Schellas Hyndman to expose.

It looks like a 4-3-3 kind of line up but really Chara and W. Johnson sit behind Valeri in the midfield with Wallace and Nagbe on the wings and R. Johnson sitting more up front in a number 9 role. 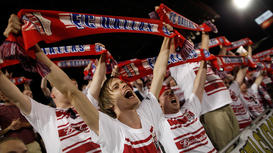 Brian checks in with the SBN Timber's blog to see what they have to say about tonight's game.

Watching out for Chara. If you want to know who will be hacking DF10 the most tonight, go ahead and just keep an eye out for Chara in the middle of the park. Currently he is 7th in the league in fouls committed with committing nearly three fouls a game. The Colombian has lead the league in fouls committed the last two seasons as well. In other words, if Dallas can frustrate him early into a yellow card, it may take him and his effectiveness out of the game quickly.

Depth must step up. With Jackson suspended and Jacobson and John potentially on the bench or just plain out of this one, we'll need to see a big effort by the depth and bench tonight. Fabian Castillo will certainly need to have a big game on the right wing for Jackson, while either Je-Vaugh Watson or Bobby Warshaw will need to step up in the middle of the park should Jacobson not be able to go. The bigger question is whether or not John goes tonight, if he doesn't it could mean that London Woodberry gets the start in his place. But could Hyndman move him over to the wings and have Zach Loyd in the middle of the defense? It's been talked about this week, so don't be shocked it it happens tonight.

Play the wings. One thing that Dallas can do to help out against the Timbers' pressure and possession is to play it wide. Dallas does extremely well at switching the play of field with Michel and Ferreira but getting the ball wide will be key in this one. Portland's formation opens up chances on the wings and if Wallace and Nagbe fail to track back on defense, the space will certainly be there for the taking.

This one won't be easy. I'll put it that way. The two games in one week thing really opens up some chances to see what this team is really made of here too. The injuries is one thing, it will be all about how this club responds to the time off and the disappointing draw in Vancouver. Portland is a quality team, no doubt about that. I think this could be a game that will give Dallas some fits too but in the end, I feel a draw is where this one will be at. Both teams will be saving some legs for the weekend and so some tight play will be result of that.