Dallas pulls out another win against the hated San Jose Earthquakes.

It wasn't the prettiest game we've seen from Dallas, but that doesn't mean there weren't many positives to take from the game.

Drew already mentioned it, but Walker Zimmerman looked like an established pro out there, and set nary a foot wrong. Far from looking green, Zim put himself in excellent positions the entire evening and looked every part the starting defender. I cannot say enough about his performance. The only way his night could have gone better would have been if he scored a goal.

Since I'm not one to say things without proof, here is some evidence:

During an incredibly dangerous moment near the goalmouth during which the Quakes were attacking off the left wing. Even though he tracked the run of play the entire time, Zimmerman scarcely allowed the attacker room to breathe. Truth be told, it was less "marking" and more "harassment". I don't believe there were more than two inches separating their bodies at any given point. That closeness allowed him to intercept an in-swinging pass that would have surely resulted in a tap-in goal. If his positional sense doesn't do it for you, bear in mind his incredibly fast reaction time, as he would not have had the time to nick the ball in time had he been half a second slower.

Instead of being beaten, Zim rounds his man and clears the ball in time to prevent serious damage. 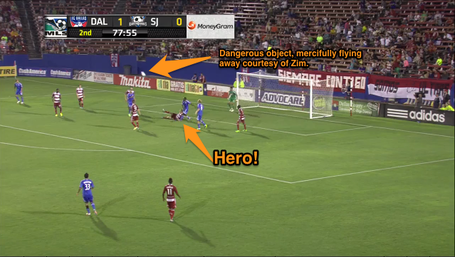 That's not the work of a kid who is too green to start. That instance shows the guile of a defender who reads the game like an open book. One start is not enough to make any judgments, but seeing him stuff one of the best offenses in the league is something we're all allowed to hyperventilate over.

Now that I think about it, hyperventilating is what I'm going to do now that I remember the Peruvian's performance. Saturday night Fernandez showed the rest of MLS that every other goalkeeper in the league is boring, and not at all cool like Dallas' #1. Perkins? Bah. Gspurning? 4-0. Ricketts? He plays in Portland. Yuck.

Raul Fernandez had his best game for the Toros so far, parrying away a silly number of shots, several of them in Hollywood fashion. I could wax poetic about how his reflexes were jaguar-esque but it's best to let this speak for itself.

Man of the match, and no mistake.

Of course, a small part of the reason he was called on so often is because Dallas is still displaying this troubling tendency to dally with the ball at their feet in the back. San Jose, like some other teams the Hoops have faced, aggressively close down and tackle whoever holds the ball. The predilection to not properly secure possession led to several turnovers, and luckily for Dallas they didn't result in a lethal blow. Schellas has mentioned that the team has been working on passing out of the back while trying to minimize turnovers, but there were still more than I'd like to see. More practice is in order.

Watson had himself a pretty tidy night in midfield. His prowess moving forward was nice to see, and he pressured the midfield more than we've seen in the past. He actually defended, and even defended well at times, making one or two crucial interceptions while pressing attacking wingers. He could still track back a bit more, but if his responsibilities are primarily offensive in nature? If that's the case, he did quite well.

It's not a proper game against the San Jose Earthquakes without them trying to take out at least a few players, and as expected there were no shortage of incidents in this game. Steven Lenhart in particular (surprised?) did his reputation no favors, but Victor Bernardez might also be hearing from the disciplinary committee. His kicking motion aimed at Kenny Cooper's head during the foul that took Kenny out of the game was ugly and unnecessary. He earned a yellow card for his foul, but I've seen red cards handed out for less. You can argue accidental contact, but I don't understand how kicking out is "accidental", especially when the ball is nowhere near the players' head.

I would probably be okay if he wasn't suspended, but that was a pretty reckless play any way you slice it. Adam Jahn also had several unsavory moments off the ball. Does Frank Yallop condone the entire team behaving in such a fashion?

Ugly antics aside, the Quakes are a very talented attacking team, and while Dallas could have held onto the ball a bit better, they shut out a very dangerous bunch. Yes, there were close calls and Raul had to put on his red cape for this one, but that doesn't diminish the accomplishment. The Toros have added another shutout to the pile and keep pace with the rest of the league to hold onto their front-runner status just a little longer.

The Timbers won (there goes my prediction) at DC, so they stay five points behind FCD, but thanks to Castillo the Hoops are still #1.

There are things that could still be improved, but at the moment I don't think it's worth fussing over. San Jose's specialty is picking apart teams after the 75th minute, so seeing it happen to Dallas isn't necessarily a sign of Impending Doom.

It's hard to argue against three points.