San Jose has one win in their last five matches coming into their game in Frisco.

FC Dallas returns home for the final weekend of May to host the San Jose Earthquakes.

Frank Yallop's club comes into Frisco on a 3-4-6 record this season. Certainly a far cry from their Supporters' Shield form from a year ago. Injuries and suspensions could be a part of that but in some ways it could also be that clubs have figured out how to play the Earthquakes this season.

Dallas lost the season series to San Jose last year, going 0-1-2 with the final meeting being a 3-3 thriller at Buck Shaw Stadium late in the 2012 season.

Michel's service. One thing Schellas Hyndman was quick to point out both last Saturday following the Seattle loss and Friday at practice was how many goals have come off of or through Michel. Amazingly the club has 10 goals from set pieces this season. That is half of their season goal scoring total. Pretty impressive. I'm fairly sure that last year the club didn't get anywhere close to 10 goals off set pieces.

Ferreira back. Having David Ferreira back this week may be the biggest coup for the club. It allows Hyndman to use a more comfortable lineup that he would prefer with one lone striker up front, likely Kenny Cooper this weekend with Blas Perez suspended. Needless to say, getting Ferreira back also means getting the club's captain back as well. One more good piece of information. Since Ferreira returned from injury last July the club has lost just six games going 13-6-10 in that stretch, including a 9-1-5 record at home.

The Earthquakes are a craft team to say the least. They are one of those clubs that are never really out of a game until the final whistle is blown. One thing can be said that the Quakes tough start to the season looks a lot like Seattle's tough start.

"It does look a lot like Seattle's start, "said Hyndman. "They were dealing with injuries and were putting out guys that weren't ready. It wasn't there first line of players."

Yallop is willing to go with a full force of offense up front should he need to. Last week against Colorado he played the big three of Chris Wondolowski, Steven Lenhart and Alan Gordon along with rookie Adam Jahn. That's four forwards on the field at the same time. Hyndman said it was something tough to deal with and train for.

"They all doing pretty well at the moment and they are all big and strong," said Hyndman. "What it does is force you to keep four defenders back at all times."

George John was a little more optimistic about the possibilities of playing those four at the same time.

"Well if all four of those players are out there it probably means we're up, and that's a good thing," said John.

The Quakes play a very direct and forceful style of game on offense. They know their over the top approach or the dump and chase look gets results against teams that struggle with aggressive players. You can already bet that should Matt Hedges not go tomorrow evening that they'll key in on rookie Walker Zimmerman or Homegrown rookie London Woodberry in the back.

Yallop is pretty simple with his formation though. He goes with a standard 4-4-2 set up that typically is pretty loose in the midfield that allows some space on the wings if a team is smart enough. 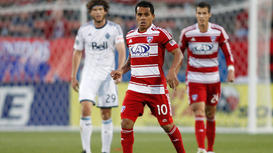 Two players look fit again for this weekend while a couple new injuries have popped up.

Direct and smart. San Jose knows how to play their style of game and they're good at it when they do so. Dallas will have to dictate the pace of the game early and not allow any simple over the top balls into Wondowloski, Gordon or Lenhart. They'll also need a good performance out of the midfield in Michel and Je-Vaughn Watson. If those two don't step up and win balls in the midfield for the offense, it will put the back four under a ton of pressure.

Get the set pieces. When something works as well as the set pieces do for FC Dallas, why go away from that? San Jose is a team that has good size but they have shown a tendency to give up silly fouls in the midfield. Of the 19 goals that San Jose has given up this season, seven have come from the wings or set pieces. That means there is a good potential for some early chances if Dallas puts the pressure on from the start.

90 minutes. You can't give San Jose a moment in the later stages of the game. They are just too good late. Of their 13 goals this season, seven come from the 76th minute on. Dallas has to lock it down late in order to get three points.

This one should be three points in my book. San Jose is good and has quality about them but those six draws tell me a lot about this team, they're good but not good enough. Yes, injuries and suspensions are one thing but they constantly have to battle back in games. It is also tough to take any of their three wins serious too. Two of them were early wins over New York and Seattle. That may look good on paper but given the form those two teams were in at the start of the season, it isn't a shocker. Lastly, they beat Toronto. Yeah, anyone should beat Toronto.

Again, this should be three points if the guys don't lay an egg in this one. Getting Ferreira and John back are huge too. This group is still beaming with confidence as well, which is more than enough for me to take them this weekend.