Around MLS: Stuck in Neutral

Draws were handed out as party favors this week in the Western Conference.

Share All sharing options for: Around MLS: Stuck in Neutral

Peter Walton, the head of the PRO, is going to have one heck of a time sorting through the refereeing mess created this weekend.

Incorrectly called (blatantly so) offside goals and red cards issued to the wrong people are only a fraction of the incidents. With "Referee Week" on the MLS website providing a bit of extra focus on the men in the middle, it's fairly safe to say that the emphasis came at the wrong time.

The Columbus Crew bust out of their funk against league punchline, Toronto FC. Federico Higuain and Dominic Oduro combined for the game's only tally, and that would be enough to win. While Columbus will need to do more to bounce back into a reliable group, taking down Toronto, even if away, has to be a minimum requirement. A win is a win though, and Columbus can take those three points to regroup and try and get back on track.

What can be said about Toronto that hasn't already been said? Many seasons worth of false starts and broken promises are enough to hurt even the most jaded Reds fan. They are hardened through years of abuse at the hands of the Toronto Maple Leafs, but it's hard not to feel for them. The new leadership at Toronto needs time, maybe years, to really get a chance to put that mess back in order, but the interim moments will be a rough ride.

Chivas USA has lost again, thumped by Real Salt Lake 4-1. They are finally resembling the team the rest of the league expected to see this year, and it has to be said that I feel sorry for their fans.

Chelis is a man whose unbridled enthusiasm is the source of much joy for his players and the press, and you can see it be slowly sucked out of him. Match by match, week by week, Chelis' passion has gone from a thundering roar to a meek meow. It saddens me to see a man who clearly feels as if he has been abandoned by his employers. Chelis knows (and even said) that his team is quite poor. What is the man supposed to work with? For all the miracles he worked with Puebla, he had more talent in one Puebla player than in half his Chivas squad.

Dan Kennedy taking free kicks is a pretty neat thing to see, as it resembles Paraguayan Paragon Jose Luis Chilavert, at one point neck in neck with Fabien Barthez for best goalkeeper in the world. Chilavert took free kicks and penalty kicks, and was pretty well regarded as a solid set piece taker. Perhaps Kennedy's future sees something similar? Or was this merely a stunt to distract from the horrible run Chivas have been on?

For all this talk of Seattle, Real Salt Lake have stopped the back and forth and have settled on mostly winning. Jason Kreis and his crew are doing quite a number on most of their opponents the past few weeks. Can they keep up their momentum and turn it into a SS challenge?

The New York Red Bulls defeated the LA Galaxy 1-0 at the Red Bull Arena, and Tim Cahill is earning his big ol' paycheck this season. Just like Henry, he's beginning to heat up in his second season, and if it really sticks the rest of the league will have to plan around two world class players when they play New York.

LA was, well... not very good in the finishing department. They made a meal of almost all of their chances, of which they had more than a few. Landon Donovan played well, if not excellently, and tried his best get his team on the board, but it just wasn't enough. Jamison Olave snuffed out most attacks before they could get dangerous, and when there was clear danger, he was there to bail out the Red Bulls time and time again.

This was billed as a battle of the titans, and was given premium billing following the last ESPN EPL broadcast featuring Arsenal and Newcastle United. I don't know what other viewers' opinions of this game were, but I was a bit embarrassed about the "quality" on display in this game. For a match hoping to draw in more viewers to MLS broadcasts, the arena looked pretty sparsely populated (not an uncommon thing in NJ) and the game itself was a roflcopter of failures in many areas. All told, it wasn't the worst match ever, but this isn't the kind of display you hope to attract people with.

Sporting Kansas City drew level against D.C. United, though it's easily argued that they should have/could have won the game. There are no guarantees they would have of course, chaos theory being what it is and all, but they did score a goal that didn't count, and it's a goal that could well have won the game for SKC.

How bad was the offside call ruined Sporting's goal? 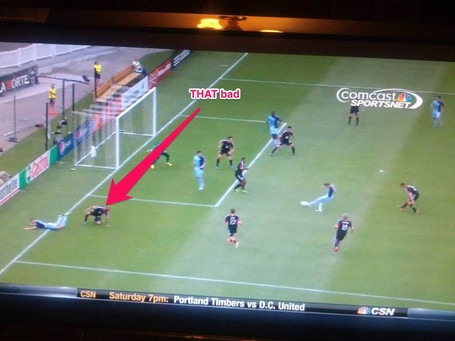 Of course, you could argue that a team of Sporting's caliber should be dispatching D.C. United effortlessly, but those DC players are still professionals. Even at their worst, there is a semblance of pride that prevents them from completely rolling over, so credit to DCU for getting a draw against a very tough team to beat.

That's a good one, right?

The Houston Dynamo have lost two consecutive home games. Unthinkable, unimaginable, tragic, baffling... all words seen on twitter. The meltdown on display as Houston allowed the Revs to score two goals was hilarious and sad at the same time. I'm not unfeeling. We have been there before.

It's not that difficult to see why the Dynamo have lost two in a row: they're just not that good at the moment. It's clearly confusing to some, but home field advantage still requires a decent team to win on said home field. While BBVA Compass Stadium has been good to the Dynamo in the past, only so many soccer sins shall be forgiven and swallowed up by the grounds before they offer up Brad Davis to the scales of soccer judgment.

Houston has several issues on their hands, and their home form can be added to the pile.

The Portland Timbers couldn't defeat the Vancouver Whitecaps, gaining only one point on FCD in the standings. While the 2-2 result could be seen as favorable on the road, but it continues Portland's trend of "clawing back", which for an ambitious team like the Timbers isn't exactly where you want to be.

After all, clawing back implies you were behind to begin with, and constantly getting behind isn't a good way to build for the future. While they were away, they don't have the standard "turf" excuse most teams do when visiting Vancouver, and the Caps just came off the Canadian Championship, which surely tired them out. Not a bad result for Vancouver, given all those issues.