The Monday After D.C.

Starters out? Who cares. Give up a goal right before half time? Who cares. Another three points against a terrible team? That's less ho-hum than you might think.

Share All sharing options for: The Monday After D.C.

It might not seem to the league at large that last night's win against DC was a big deal, and on its face that would be a fair assessment.

After all, coming into Saturday game D.C. United had been only slightly more organized than a henhouse, so having them lose to the league leaders hardly seems worth noting. If anything, it would appear that Dallas disappointed, winning by only one goal when as recently as Wednesday the uninspiring Houston Dynamo hung four on the same team.

Five Thoughts From The DCU Win 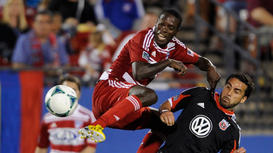 But things are never quite that cut and dry, as both teams rolled out significantly different lineups to face each other. While DC's changes were meant to reinvigorate the squad with youth (as well as save Bill Hamid's confidence), FC Dallas' found themselves forced into several substitutions due to injury.

This situation was not something that should have been taken lightly: DC was absolutely desperate for a win, and there were portions of the game where they played with appropriate levels of desperation. While it would be, given the opponent, completely unacceptable to drop points at home, this was a game where the excuses were tailor-made should a let-down occur. If something had gone wrong and Dallas had squandered the three points, everyone would have pointed to the starting lineup featuring several critical pieces out. A team doesn't just drop a George John or David Ferreira from the lineup and feel no repercussions.

In effect, this was the quintessential "trap game".

All things considered, that was a big win, as every victory is crucial to maintaining a proper cushion between Dallas and the rest of the league. A very tough stretch looms for the Hoops, so banking every point is a must if a campaign for the Supporter's Shield is to be sustained. With the LA Galaxy losing to lowly Vancouver, things are looking pretty solid for our boys in stripes in the coming month. The toughest stretch of the season will require health, focus and margin for error. I expect a loss or two in the coming weeks, so do not take the points against DC United for granted.
The only thing missing is health, and with a full week of rest coming up, there's time for some of our most important cogs to get back to full fitness.The season rolls on, some scary clubs have been dispatched, and Dallas is still the top team in the league.
In the event that you're a bit down because it's a Monday (and everyone knows Mondays are the 11th plague), take a gander at the standings chart. Look at the point difference between FC Dallas and their closest rival. 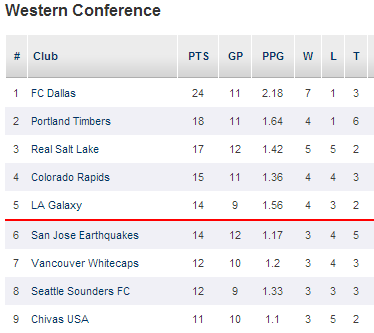