The Hoops remain at home for their second game in a matter of a couple days as they host D.C. United tomorrow evening. FC Dallas remains a the top of the league standings with a nice 6-1-3 record on the season. D.C. on the other hand is at the opposite end of the spectrum with a 1-7-1 record with the last six of those results being losses for Ben Olsen's club.

United have been woeful as of late, giving up 15 goals in their current losing streak and only scoring three of their own (two were in a 3-2 loss to Philadelphia a couple weeks ago). Things just aren't clicking and based on their 4-0 loss to Houston on Wednesday something has got to give for Olsen's club.

D.C. has not won in Frisco since 2007 with Dallas winning two out of the last four meetings at FC Dallas Stadium.

First half defense. FC Dallas still remains the only club in MLS that has yet to give up a first half goal all season. Heck, they haven't given up a goal before the 68th minute all season long. If only those games were 70 minutes long, the record would be slightly better.

Going streaking. FC Dallas enters this game on a league-best eight game unbeaten run. That is good for third best in club history tying a mark set back in 2005. It is still miles away from the great 19-game run back in 2010.

As mentioned above, D.C. United is coming off one of their worst losses in a couple years under Ben Olsen, a 4-0 drumming at home to the Houston Dynamo. Two goals were scored early in the game and late in the second half Houston was able to put the game away with two more.

United have the worst offense in the league at the moment with just four goals scored this season. Injuries have taken a toll on this club as both Nick DeLeon and Chris Pontius have been out of the lineup for a few weeks. DeLeon was able to get back into things on Wednesday against Houston but his contributions weren't enough in the blowout loss.

United has been shutout in six of their games this season including all four of their road games.

Olsen likes to use a fairly similar formation that Schellas Hyndman uses here in Dallas. Dwayne De Rosario will sit just below the main striker and he will float in and out in a similar fashion that David Ferreira does here.

Just a hunch on the lineup here. Olsen could easily mix things up and bring DeLeon back to the starting lineup for Saragosa or Porter. We could also see Carlos Ruiz or Leonard Pajoy up front instead of Rafael.

Forward Trio An Option For Hyndman? 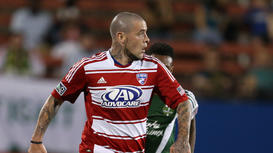 Could Hyndman go with a three-headed monster up front against D.C. United on Saturday?

Don't let up for a second. One thing Dallas cannot afford to do is allow D.C. any space in this game. United are a desperate team at the moment and you cannot let them have any sort of chance to get some momentum here. No matter who starts for Hyndman on Saturday he needs to get 100% effort from all involved. Keeping the high pressure that we've seen lately out of the attack will be key as the Black-and-Red are prone to giving up loads of space in the defense or in the case against Houston on Wednesday, they stumble around just trying to defend.

Win the possession battle. Believe it or not, D.C. actually does well in the possession game, they just haven't been able to do a darn thing with it. They pass well as a team but where Dallas can win this one is by spreading them out and forcing them to chase the game. We've seen it time and time again this season as to how successful Dallas can be when they spread teams out by working the ball wide. Doing that against D.C. won't be any different. That means Cooper needs to be active on the left and either Jackson or Fabian Castillo on the right (btw, my gut tells me we'll see Jackson back in the starting XI).

Shutdown DeRo. Let's face it, without DeRo, United would be even worse than they are right now. At least against Houston you could see the former MVP give it his all during the game. That nearly sparked some positive play to start the second half by United but it wasn't long before Houston found a way to score again. The big question will be if he has enough in the tank to go all out again this weekend against a team that presses high and does well in the possession. If Dallas shuts DeRo down in the midfield, they stand a very good chance to beat D.C. and extend the unbeaten streak at home.

Let's be real honest for a second. This is a game FC Dallas should win. But soccer doesn't always work like that. While injuries pop up, you never know what kind of bounce you'll get. D.C. hasn't had any lucky bounces this season while FC Dallas certainly has had a few. Saying all of that, this is still a game FC Dallas should win. United have been very bad as of late and Dallas still has the offensive pieces in place - even sans Ferreira - to win this game. This is a three points or nothing else kind of game. No excuses.