The Difference Between Andrew Jacobson and Je-Vaughn Watson

Is Watson as much of a downgrade over Andrew Jacobson as he seems at first blush?

Share All sharing options for: The Difference Between Andrew Jacobson and Je-Vaughn Watson

Perhaps it's unfair to bag on Je-Vaughn Watson. After all, there are times when even the most level-headed fan will inadvertently pick a player to use as a scapegoat, and once that idea is entrenched in your head it's hard to get out.

I turned to Opta Chalkboards to see if my eyes lined up with what actually occurred, and something unusual popped out. According to Opta, Watson isn't bad. Since Andrew Jacobson and Watson played a similar number of minutes (not exact, but close enough), and since Watson was brought in to replace Jacobson, it's only fair to compare them to each other. The set of instructions might have been different, but with Dallas holding a lead one would have to assume (knowing Schellas) it was more defensive in nature.

The category that pertains the most to this would be distribution and defense. AJ's charts will come first, Watson's will come after. First we'll compare Watson's distribution to Jacobson's. 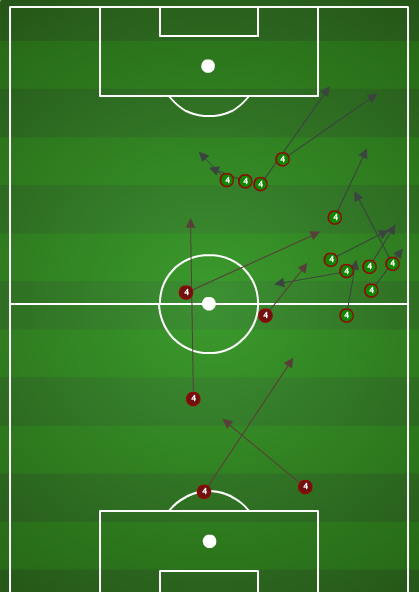 Above you'll see that Jacobson's distribution is right around the middle of the field, with a few passes in the attacking third. The location of the passes is likely a combination of a much better Dallas performance in the first half (thus allowing him to push up the field more) and the fact that Jacobson has always been a fairly aggressive player. Michel handles long range passes, so Jacobson usually gets in closer to distribute. All in all, Jacobson attempted 23 total passes and succeeded in 17 of them. He still gave the ball away in a few dangerous places, but they were mostly in long range, low risk efforts. Overall it was a decent performance. 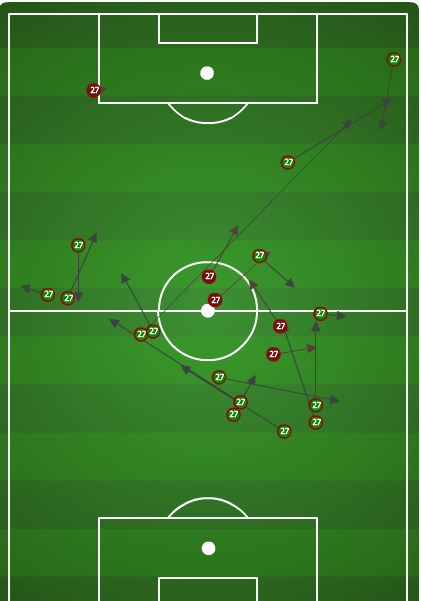 Watson's distribution is much further back than Jacobson's, but again that is likely dictated by the in-game situation. Shortly after the half began, Matt Hedges got his goal, and with a two goal lead on the road conventional wisdom dictates you defend and take less risks. It's also to remember that it's not as if the Whitecaps were going to take losing lying down, and their greatly increased pressure resulted in Dallas having to push back. Watson attempted 24 total passes in various forms and succeeded in 17 of them. They seem similar, right?

Not entirely. While Watson wasn't a complete disaster in the turnover department, his missed passes (interceptions or blocks) were of the short variety, during a time when Vancouver was countering with speed and pressure, and in a dangerous spot in the field. Jacobson's missed passes were all speculative efforts, whereas Watsons' failed passes that were no more than a few feet in distance. Watson's distribution also occurred during a much more stressful period in the game for both the defense and midfield when every mistake could be amplified.

Then you get into the defensive side of things. Jacobson's chart is first, Watson's is second. 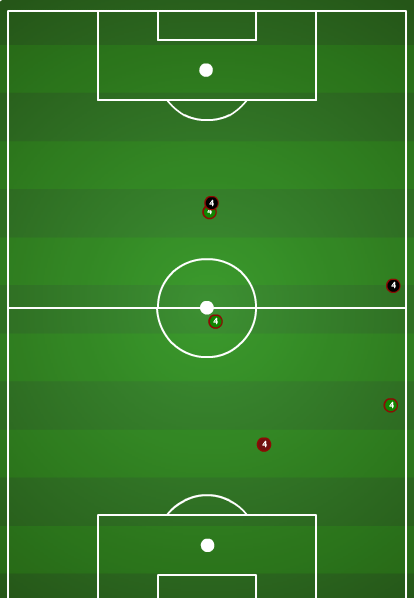 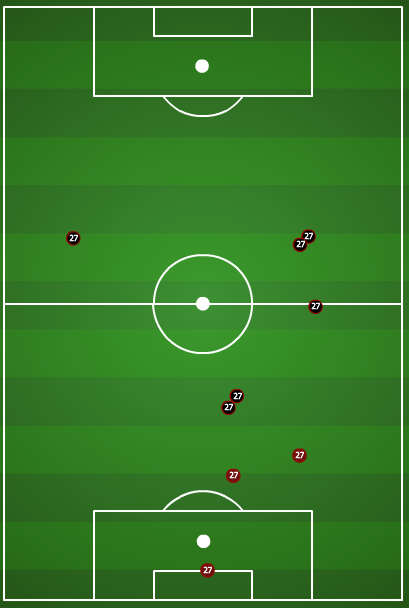 Watson had five recoveries, two clearances, and one interception. AJ had two recoveries, one clearance, and three tackles won.

Again, the chart aligns with the distribution example in that AJ was further up than Watson and in that they both have similar defensive numbers. Yet that again omits the eyeball test. Watson's lack of pressing cannot be measured by statistics or tracking. Befuddling opta observers (and rightfully so, considering they only measure facts and not "what ifs"), Watson constantly commits what some baseball fans call a play-unmade.

A play-unmade refers to a broken play that should be scored an Error, but isn't counted as one for any number of reasons. Similar to a play-unmade, Waton's lack of effort in closing down passing lanes and his lackadaisical backtracking cannot be measured in a way that shows in a chart. That's mostly because "lack of effort" is subjective, but I think for fans it can be easily defined. It's explained in the same way Supreme Court Justice Potter Stewart defined pornography: "I know it when I see it".

Statistically it is surprising to see them neck in neck in defensive/passing categories, but a simple eye test will reveal that Waton's effort compared to Jacobson's isn't as tenacious. Jacobson's hassling breaks up many plays and prevents many a pass from even being attempted because of the pressure he puts on the player controlling the ball. However, despite his lack of defensive prowess, people mentioned Watson looked good going forward, and he has found some success in a more attacking role with the Jamaican National Team.

Is Watson being used incorrectly by Schellas, or is his current usage bred out of necessity rather than choice?

If someone just saw the Opta Chalkboard, it would be easy to assume that Watson and Jacobson were (almost) equally effective players in this game.