The FC Dallas implications of my latest for The Shin Guardian, and an early attempt at a purely statistical power ranking.

On the Shin Guardian yesterday I broke down the MLS season thusfar and with an eye to quantifying how well each club doing relative to expectation, and whether their results so far are sustainable. Please check out that article first, because what follows here is pretty much secondary bonus material. We'll focus the data and visualization on one club, then tinker with making a quantitative ranking of teams.

First, to show which clubs are offensive and defensive outliers, here are all club results from 2006 through 2013, sized based on games played (so the little 2013 ones are more noticeable) with an emphasis on FC Dallas' seasons. The defensive axes are reversed so that clubs would want to be up and to the right on both: 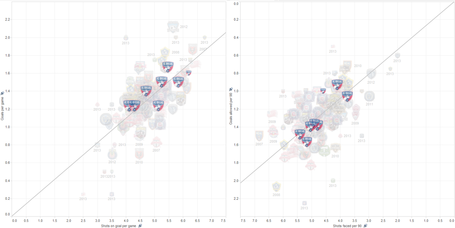 Click above for larger image, or here for interactive, filterable version

Any club outside of the central mass of full-season data is performing on that side of the ball at an unsustainable level. FC Dallas is a little better than past seasons on both sides of the ball, but not in as extreme of a fashion as the two LA teams. Their true level is probably a little more modest than current results would indicate, but hopefully not dramatically so.

Meanwhile the other visualization is a representation of how well teams have fared relative to expectations set by casino odds and 2012 regular season results. 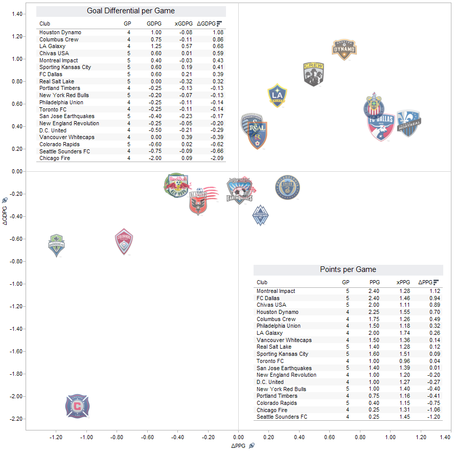 As you can see that FC Dallas' point total is much higher than the bookies expected, and their goal differential is a little better than would have been predicted by their opponents' 2012 regular season results. They are amidst the group who have clearly improved the most during the offseason.

Please note the performance relative to casino odds is descriptive, not predictive. The oddsmakers will adjust, so don't blame me if you bet heavily for Montreal/FCD/Chivas, and against CO/CHI/SEA then start ranting like Charles Barkley. 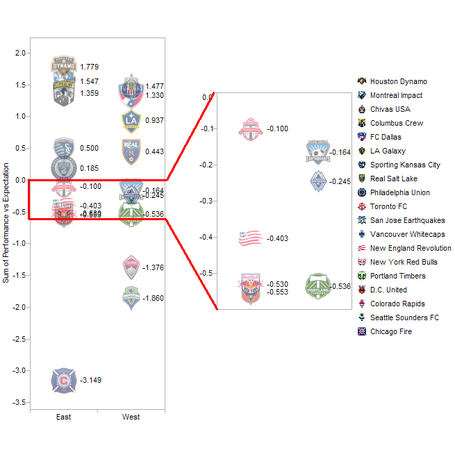 Here we have an attempt at an objective Power Ranking. We'll call it the Expectation Ratings. It's simply ΔPPG+ΔGDPG. There's surely a more accurate way to weigh those two factors, and other factors should probably impact the ratings on some level, too. It's a lot more scientific the approach taken by almost every other Power Ranking, though.

So, Houston is pretty clearly ahead of the pack. Yes, I and the equation both know that Dallas beat them, but a late win by 1 isn't a clear indicator of superiority.The Dynamo have simply played and beaten more impressive opponents so far than anyone else, with that narrow defeat where they gloriously coughed up El Capitan as the only blemish.

Most Power Rankings seem to be hugely overrating LA, but the Expectation Ratings reflect that the Galaxy had the easiest March schedule in MLS, by both measures. Sure, they came out of it well, but they didn't dominate, so they don't deserve to be in the top tier yet.

Once you get past SKC, RSL, and Philadelphia, the next 6 are so hard to tell apart that I had to zoom that section to make Vancouver, New York, and New England crests noticeable. San Jose, New York, and DCU may not deserve to be stuck in this tier, since their expectations were much higher than the others due to their 2012 records. The Revolution are an interesting case, because they've pretty much held serve without scoring.

Colorado and Seattle need to turn things around fast, and if Chicago isn't very careful their season will be over before it begins.

These rankings were thrown together quickly, and any suggestions for improving the methodology would be welcome. Any aspect of the first graphic in this article (which isn't used yet) or any other publicly-available part of 2013 (or 2012) results are worth discussing.