This week features a set of matchups between strong and weak teams. Which game has the biggest potential for an upset?

Share All sharing options for: Marquee Matchups: The Weakest Links

In case you missed the match last night, the LA Galaxy played a strong game against Monterrey only to lose in the end. LA's first half in particular stands out as one of their best performances across all competitions so far. A spectacular chest-trap and control sequence from Jose Villarreal (Go look at his hold up play to get the ball to Mike Magee, right now, on the CONCACAF site), that was followed up by Robbie Keane and Mike Magee, allowed AJ de la Garza to score a wonderful team goal. The Galaxy followed up the goal with more attacking sequences, many of them of the promising sort. Notice how "promising" is not the same as "scoring".

It would be a theme that would come back to haunt them.

A few missed chances (I'm looking at you, Sean Franklin) would be their undoing, because in typical Mighty Ducks fashion, Monterrey launched a fierce assault in the final ten minutes that saw the Galaxy lose 2-1, and now they cling to a thin strand of CCL hope. They march on to Monterrey, losing in aggregate by a goal and with Monterrey having scored two away goals.

Their chances do not look good.

Here is a tasty Friday night fight for all of us who do nothing but watch soccer in their spare time. This game will temporarily settle the question of "is Sporting back?". The question arises because for all their offseason promise, the only complete performance KC has put together so far was a comprehensive squashing of Montreal last week.

As impressive as said squashing was, it takes more than one game to establish any sort of pattern, and pundits will be looking at Sporting to follow up their win with another convincing performance against an inconsistent DC squad. With Graham Zusi and Matt Besler getting a proper week of rest after having served with the USMNT, and Benny Feilhaber looking more and more threatening in midfield, Kansas City will once again have a fully fit and rested squad with which to play their high-pressure, fitness-stressing game.

DC has been a bit confusing so far, with a few decent performances peppered amongst some dismal showings, such as last week's effort to emulate traffic cones against Columbus. This doesn't quite yet look like the DC United of last year and their only victory so far came at home against a completely ramshackle Real Salt Lake. They lack a cutting edge in the final third and when faced with high pressure they tend to scramble and lose their cool, the Columbus game being a good example of this. 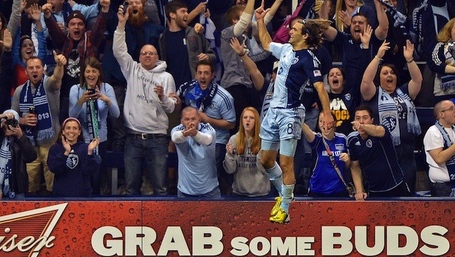 The Portland Timbers so far have been a team that you can see one of two ways.

One way involves a team that is scrappy and always fights back to earn a result. Their effort is commendable, and their movement off the ball is quick and fluid. They show a lot of spirit and are not easily demotivated, which can be attributed to their coach's motivational skills and the fire he instills in his men. They score goals as good as they get them, and they have only lost one match so far.

Another way involves a team that cannot hold opponents off the score sheet, and as such are always having to claw themselves back into a game. They have given up a goal in every game, usually a back-breaking opening goal that stifles whatever momentum they have created up to that point. Their defensive unit is very disorganized and the team is missing Troy Perkins something fierce. As a result, they have yet to win a single match so far, though they are only four games in.

The Dynamo meanwhile continue to puzzle me. They have not really been fun to watch, and generally I do not look at them and think "wow, that is a talented team." Brad Davis' service is excellent, but beyond that he doesn't do anything to sway my opinion of him one way or the other. Their home field has been customized to benefit their hack-n-slash tactics, and also accomodates their lack of threat and defending from the wings. Yet they constantly get results, and I have given up on trying to figure them out.

I feel that Portland, with their artificial turf and their "big boy" field-width , have a chance to pull off an upset. If the Timbers do not win the pressure will be enormous, and they need that W more than Houston.

Passion and desperation will push the Timbers to victory.

The Red Bulls finally broke into the win column last week against Philadelphia, where a stellar bench appearance from Thierry Henry gave New York three points and silenced the critics, temporarily at least. In order to really get their season going, Red Bulls fans will be expecting no less than three points against a struggling Chicago Fire.

The Fire have been abysmal in ways no one could have predicted. They had a solid offseason, and their roster suggests they should at least be able to keep some goals out of their net. So far that has not happened as expected, with Chicago letting in about 300 goals per game. How does Austin Berry look like now, Rookie of the Year voters? Couple their terrible defending with an equally toothless attack, and you have a recipe for disaster.

Moribund Frank Klopas will not last long at his job if he loses this game, which I suspect he will. If both teams play to their potential there is no reason New York should come away from this game with anything less than 1 point, and I expect that the desire to double up on wins is stronger than the Fire players' desperation.

After all, the players won't be the ones fired if they lose, and morale on that team isn't doing so well at the moment.

With Chivas USA out of action this week Dallas can gain some breathing room if they win at Toronto. A few favorable results and the Hoops could have a nice cushion by Monday morning.