The Ultras made one heck of a statement on national television, while Houston's golden child is now unavailable against the LA Galaxy next week.

Share All sharing options for: Around MLS: Sweet Schadenfreude

The Montreal Impact put out the Chicago Fire 2-0, and the Quebecian performance was far more dominating than the scoreline suggests.

Frank Klopas' boys had finally started to look as though they might pull out of their poor form, but then they went and laid an egg in Canada. A massive, ostrich-sized egg. The Fire didn't do much of anything with their time on the ball, while Montreal could have had another goal or two if they really put their minds to it. Luckily for Chicago, the Impact left good enough alone.

Other than Di Vaio's great goals, two talking points were the Impact Ultras protesting the Amway Canadian Championship performance (in which they rested many starters and lost 2-0 to Toronto FC) with large banners that read, amongst other things "We took it seriously" and "Voyagers Cup Before NBC". They protested not only with banners (seen in the picture above), but with a moment of abject silence on the field. I think the Impact Ultras though can be pleased with their team's performance here, especially Andres Romero's spectacular goal. This has Goal of the Week written all over it.

The other talking point is that referee Fotis Bazakos had a moment which, depending on how you take it, could be a good or bad thing. During a forward run by Andrea Pisanu, Jeff Larentowicz was the last defender and tripped him up directly outside the box. Bazakos pointed to the penalty spot and brandished the dreaded red card, sending Larentowicz off to an early shower. The Fire players immediately surrounded him (a league no-no this year) and after consulting with his assistant, Bazakos changed his decision to a free kick right outside the box.

It's remarkeably rare that a referee should change his mind, but in this case it was the proper choice considering his original penalty call was clearly incorrect on replays. While his red card on Larentowicz can be debated, the penalty was a clear cut poor choice. Poor initial choice aside, he should be commended for going to his assistants. Too many referees are happy to take their poor choices to the grave, so this is a good instance of proper refereeing amidst mistakes.

As a side note, Sherjill MacDonald was absolutely useless. Woof.

The Columbus Crew handily thumped DC United 3-0, and Ben Olsen's seat has gone from uncomfortably warm to officially hot. Something else that was officially hot? The Crew scoreboard. I will avoid the obvious "lit up the scoreboard puns" and will let pictures do the talking. 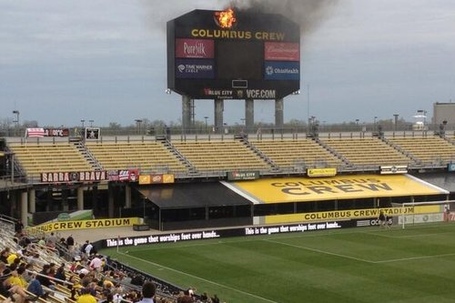 It turns out a speaker malfunction was the root of the fire, and since the speakers were knocked out of commission before game time, the fans sang the national anthem themselves. A neat touch and only one of many cool things the Crew did that night. If you tried to watch this game, I feel sorry for you as there wasn't much to watch. Feel free to take pity on me too. The first half is best described as "the Crew run around DC, doing as they please" (oddly reminiscent of their last meeting). I'm not sure what is going on in Olsen's locker room, because the team does not look even remotely capable of playing at what fans would consider "acceptable" levels.

Curiously enough, yellow was the theme of the night and it wasn't because the Crew's colors are yellow. There were a whopping seven yellow cards handed out for various reasons.

Also, Federico Higuain is (really) good. I don't know if you knew that, so consider this a public service announcement.

The Portland Timbers shocked the MLS world, beating Sporting Kansas CIty by 3-2 in a very entertaining game. It wasn't terribly entertaining for Sporting fans of course, but neutral observers had no short gage of great moments to admire. Sporting will be left to rue the chances that weren't taken, especially by Aurelien Collin. It's a bit harsh to criticize a defender for not scoring, but he practically had tap-ins in some form or another that he simply couldn't put away.

Give credit to Kansas City, as they played a heck of a game and could easily have drawn, but pure desire and skill isn't usually enough against a team that seems destined to win.

Ryan Johnson had a great game, and Caleb Porter had his team motivated and playing with the pace and belief that has turned heads this season. This Timbers team did not come out and play cautiously. They came out with guns blazing and went toe to toe with one of the best teams in the league. A young team doesn't get to make a bigger statement than going into Sporting Park and beating Kansas City in style. It's officially time to take the Timbers seriously in the West. Their defense might not be good, but it really doesn't matter when they can hang three goals on a very stingy back line.

In another moment of sheer managerial chutzpah, Bruce Arena trotted out a B team to face Real Salt Lake at Rio Tinto Stadium. Many were confused, but all doubts were silenced as the Galaxy B squad handled RSL with ease, defeateing them 2-0 in their own back yard.

While LA can definitely take pride in their accomplishment, it didn't come without a price, as promising rookie Jack McBean broke his clavicle during the game and will be looking at a long stint on the sidelines. Here's to hoping the kid gets healthy quick and resumes playing. Watching promising young players get cut down is never a fun thing to see.

The last match worth mentioning involves the Houston Dynamo dropping points to the Colorado Rapids, drawing level 1-1 at BBVA Compass Stadium. Oscar Pareja's boys played a commendable game, and if it wasn't for a moment of individual brilliance by Giles Barnes, the Rapids would have ended Houston's unbeaten streak at home.

The best part, for schadenfreude reasons, involves Brad Davis getting sent off the field for a foolish tackle at the death of the game. He was already carrying a yellow and the referee had seen enough. He brandished the red card (bypassing the second yellow entirely) and off he went. The LA Galaxy will be waiting for the Dynamo in LA, and Houston's unconvincing road performances will be even worse without Davis on the field.