FC Dallas heads to BC Place for the Week 8 rematch against Vancouver.

FC Dallas hits the road for one of their longest road trips of the 2013 season as they face the Vancouver Whitecaps. BC Place has been a fairly kind spot for FC Dallas, in the two meetings Dallas is 1-1-0, with the most recent visit being a 2-0 win.

This is a rematch of last weekend's encounter that saw FC Dallas win 2-0. Blas Perez scored a second half goal after Vancouver's Brad Rusin scored an own-goal in the first half. Dallas arguably played their most complete game of the season last week in the win.

Now they must hit the road where they are 1-1-1 on the season.

Blas scoring. In his last nine MLS matches, Blas Perez has seven goals and 14 of his 27 shots have been on target. He also has the most goals (nine) of any player in CONCACAF World Cup qualifying. So it shouldn't be understated here, get Super Raton the ball!

Michel's involvement. We talk a lot about how involved David Ferreira is on the offensive end and how he contributes to a lot of FC Dallas' goals. But it should also be pointed out how involved Michel has been on the offensive end as well. For someone playing a holding defensive midfielder role, Michel has contributed on five of FC Dallas' 13 goals.

More: Where to Watch Injury Report

The Whitecaps struggled on Wednesday night in the Amway Canadian Championship against Edmonton FC. The Caps needed two late goals to win 3-2 on the night. Martin Rennie used a mixture of reserves and starters in this one, with most of his defensive and midfield sitting this one out. One has to wonder if he plans on using his full strength lineup this weekend at home unlike what he used last weekend in Frisco.

So predicting what Rennie uses in his starting XI is anyone's guess right now. Go big or go home? Or rest some offensive guys again for the return match with Edmonton next week? Whitecaps fans hope to see all of their main guys out there.

Not to mention, who will be gassed for this one with the double duty? Last weekend their defense struggled with the speed but most of their normal starters in the back were rested on Wednesday.

Part of me thinks Mattocks will go in this one but the other side of me thinks that Rennie will do what he did last week and throw Tommy Heinemann out there instead. Mattocks' speed would be a factor if he went from the start. But Hienemann is a bruiser that looked decent against Edmonton on Wednesday (he got the game-winner too). 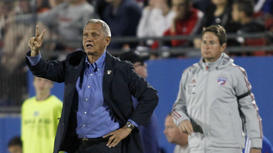 For the second weekend in a row, Brian sat down with the SBN Vancouver blog to get a little more on the enemy.

Play smart and simple. Last week it was the case where Dallas could do no wrong for the majority of the match. When Dallas wanted to push, they pushed. And when the possession game was the thing, Dallas controlled it. So really this weekend is about doing more of the same. Taking their moments and making the most of them. Vancouver knows and should expect the pressure again tonight.

Don't get caught up in the fouling game. The Whitecaps came into last weekend's match as a club that committed the fewest fouls in the league. Now, not so much after last Saturday's game. I'd imagine they will stick to the physical play in this one and try to get the heat turned up on guys like Jair Benitez or Jackson Goncalves. As long as Dallas doesn't get caught up in the fouls and cards, they should be fine in this one. Let Vancouver commit the silly fouls and get caught in bad spots like they were last week.

Play the wings. We'll likely see a very similar 4-3-3 out of Rennie tonight, like we saw last weekend. Anytime Dallas went wide last week, they saw success. Doing that again in this game will provide changes on goal.

Given Vancouver's form this is really a game that Dallas can go out and grab three points in my mind. The thing that I hesitate with in this one is the revenge factor and the fact that Vancouver did get a win (even if it was an ugly one) on Wednesday. You have to think they will try to go a little more for it in this one, being that it is at home. I think a draw is okay at this point too and probably expected by some out there. I think Dallas gets one early but Vancouver pulls one back in the second half.