Six games into the new partnership and FC Dallas has yet to lose a game with the midfield paring.

Share All sharing options for: Jacobson, Michel Partnership Growing With Each Game

It was a move we all questioned back at the Houston Dynamo game. Is Schellas Hyndman really moving Michel to the midfield, a spot that he has never really played? Indeed he did and six games later I think it continues to be one of the best and ballsy moves made by the Gaffer in his time at FC Dallas.

Michel partnering up with Andrew Jacobson has really opened up the way FC Dallas has played in recent weeks. The team is more fluid in their attack and the defense is reaping the benefits from the move with four shutouts in the last six games.

"We have an understanding of where we need to go, when we press, when we wait, and the guys behind us help us a lot," said Jacobson following the 2-0 win over the Vancouver Whitecaps.

In recent weeks, the two have combined well to not only win more balls but help push things forward again in the attack. Michel has two assists on the season while Jacobson has doubled his career MLS goal tally with two goals this season.

Against Vancouver they combined for eight interceptions. Against the LA Galaxy they combine for 13 interceptions. They are doing well to get in place to win balls and keep pressure off the back four. Their passing is also improving between the two of them and with the rest of the club. The ratio of good passes to bad was pretty evident against Vancouver as they helped keep the possession clearly in their club's favor. 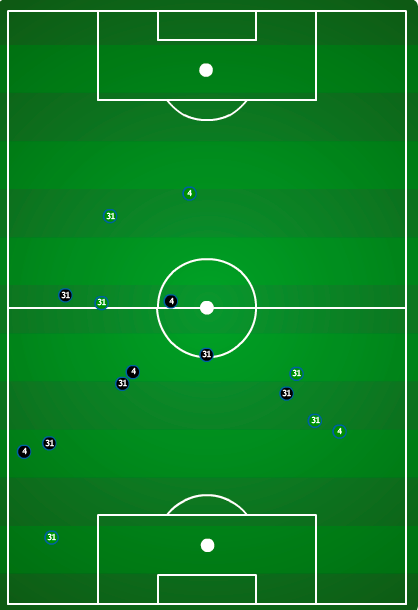 Here is the defensive effort from Michel and Jacobson against Vancouver. The darker dots are the interceptions with the green dots showing tackles won. I didn't include the recovery stuff as it would have taken over the map here but combined they had 21 recovery spots on the map.

The partnership is growing each week but the funny thing is the two don't communicate that much.

"I think we have a good understanding," said Jacobson. "Not a whole lot has to be said to be honest. We speak French to each other, which is neither of our native language."

But the bigger thing in the success of these two may be just the fact that the rest of the club is playing some damn good defense these days.

"I think we are in a good place, shape wise we are doing well," said Jacobson. "I think a lot of it is the guys in front of us, we are staying with that block of six. The four in front of us are doing a great job for making it easy on us. It really is just a collective effort right now."

You could see it on Saturday against Vancouver as guys like Kenny Cooper and Blas Perez were tracking back more on defense to help win balls and get things moving forward. That all out kind of pressure and defense helps in bigger ways than you can imagine.

"Team defense it is as simple as that," said defender George John. "We have a strong back four, strong goalkeeper. But everybody on the team, from the forwards up the field, everybody is working hard to shut down the opposing team. It's paying off with shutouts."