Around MLS: The Titans Awaken

Sporting were humbled by the Galaxy, but it can't compare to the heartache in Toronto at the hands of the Houston Dynamo.

Share All sharing options for: Around MLS: The Titans Awaken

That rumbling in the distance?

"The Galaxy have awakened, and they come to feast on the flesh of men. Cower before them and sing songs of praise, lest you be swallowed whole and destroyed."

That's what Sporting Kansas City would say about them at least, as they lost 2-0 to the LA Galaxy at the Home Depot Center. A wildly entertaining match has the MLS media salivating at the prospect of a fully fit and firing LA squad, who last night put on clinic on how to break down Sporting's defense. Landon Donovan did look a bit rusty and despite that he still shredded through Sporting's vaunted high-pressure midfield. He served up several high quality passes, a few of which Robbie Keane made a complete mess of.

Keane had an odd night, at moments brilliant and inspired, and at others a stuttering confused mess. Keane put together several incredible passes to unlock SKC's midfield and defense, but when receiving great passes he just shut down as he appraoched the net. He had two distinct breakaways and on both he didn't even manage to get the shot off properly. If the towering Irishman had put one (or more) of those away, the news would be equally focused on Sporting's poor defending as it iss on the Galaxy's great performance.

NBC again demonstrated to the sports world how to put on a quality broadcast, and we should all enjoy the last few months of Arlo White covering our league. One of the better moments of the broadcast came when Marcelo Sarvas handled the ball during a run up the field that led to his goal. White and Martino dissected the midfield run and zoomed in on the handball Sarvas commited. National broadcasts can sometimes shy away from things that bring shame upon the marquee teams in the league, and while the handball doesn't exactly hurt the nature of LA's win (it was convincing) it's nice to see some criticism without excuses go their way for once.

Toronto FC just can't buy a win, drawing 1-1 again the Houston Dynamo. In a game during which Houston was mediocre at best, this was just a heartbreaking result for TFC fans, as in true movie-scipt style the Dynamo tied it up on practically the last kick of the game.

Toronto had many breaks go their way, the biggest of which was the red card issued to Jermaine Taylor in the 62nd minute after hitting Robert Earnshaw in the face. It was an attempt to stop him from breaking away alone on goal, but there were probably better ways to go about it. While Earnshaw made a bit more of it than necessary, putting your hands in somebody's face (especially if you're the last defender) is practically begging for a sending off.

During the first half, the only Toronto player who looked capable of doing anything with the ball was Earnshaw. The rest of his team derped along, incapable of stringing two passes together and being generally inept at this whole "soccer" thing. The Reds were clearly into the game and ran furiously after the ball, but sadly they were missing the skill required to put all that commitment to good use.

After the half the Reds picked up their game dramatically and controlled it from there. You know everything is aligning in your favor when Jeremy Hall scores a goal. If that last sentence is confusing, feel free to go back and read it again.

Of course, Hall scoring a goal makes God's joke on poor Toronto far worse. Many MLS fans were pulling for the Reds to win and when Houston scored, twitter erupted in the kind of tweeted condolences usually reserved for the deaths of Heads of State.

You notice how Houston was barely mentioned? They were invisible except for the goal. ZzzZzzzZzzzz...

The MLS media can stop their collective panicking now, as the Seattle Sounders finally (finally!) picked up their first win of the season. The win itself wasn't particularly convincing, though it would be unfair to say Seattle didn't deserve to win; they played well enough to keep Colorado from scoring. It is cruel for the Rapids though, who were the better team for large portions of the day and looked impressive overall on the field of play.

The Sounders finally had a striker ready to go, with Obafemi Martins coming back from his injury to score the game-winning goal. The goal was a good one though it involved a bit of luck. Shalrie Joseph hit a long shot from outside the box which Clint Irwin did veyr well to keep out with a lunging save. Unforunately the rebound fell right at Martins' feet, who cleanly tucked it away.

The Rapids have been hit with the FCD Curse of 2012, as they lost not one, but two players to injury Saturday. Edson Buddle missed making the lineup due to right knee pain, while Marvell Wynne came out in the second half after feeling pain in his right quad. I have this unending hatred of the the Rapids, but we should all feel for Oscar Pareja and the crazy battery of injuries he has had to deal with. Here's a list of players currently out: Martin Rivero, Jaime Castrillon, Pablo Mastroeni, Matt Pickens, Diego Calderon, Kevin Harbottle and Deshorn Brown.

Any more injuries and the Rapids will have to put cardboard stand-ins on the pitch to fill the team sheet.

Chivas USA lost again, this time to Real Salt Lake, by a scoreline of 1-0. Perhaps this is worthy of further study because El Chelis' team just hasn't looked the same the past two weeks. RSL limited their offense consideriably at Rio Tinto Stadium, but not before Chelis mocked the state of Utah on his twitter account.

That says "When my grandchildren misbehave, I will threaten to send them to Utah."

He followed that up with this gem.

Someone asked him why Utah, to which he replied "Because it's raining, gray, and cold. There are no people walking the streets."

Hopefully that will teach him to focus on his team's complete lack of shape in the back. It's deliciously ironic to see Chelis criticize an entire State publicly and then have his team promptly fall on their faces. I'm sure all Utah residents took some small pleasure in that. Watching Chelis yell at Javier Morales as he walked off to be substituted was a bit surreal, as was his exchange with Jason Kreis.

Apparently Chelis is something of a sore loser. He walked off the field before the final whistle blew, prompting his assistant to apologize to Jason Kreis for his Chelis' early departure and bizarre behavior. His own staff are having to apologize for his behavior. This is what Chivas USA has been reduced to: publicity stunts.

The Red Bulls beat the New England Revolution 4-1, though it was closer than that for much of the game. Long story short, New England just cannot finish to save their lives, and Henry is still made of Magic. Curiously, he blew his top at his own teammates after his goal, and no one can figure out why. Mysterious.

There was a goal explosion yesterday at RFK stadium, where the Philadelphia Union beat DC United 3-2. Four goals were score in the first 30 minutes, with Jack McInerney getting two before the half. The game entertained for nothing else if only to see which team wanted to lose more. But after a while it was clear that DC United had no business being on the field, while Philly improved by cleaning up its act a decent amount. Dejan Jakovic had a nightmare of a game, losing his mark several times and was outfoxed by every forward that came his way.

Not much else to say beyond the obvious fact that DC United are a complete disaster at the moment.They might be able to get their act together, but they better do it quick. A few more results like this and they will find themselves in a really deep hole, one that they might not be able to climb out of.

Also, Sepp's account tweeted this today, in case you missed it: 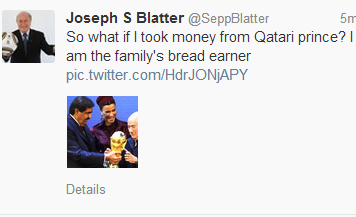