The Monday After Vancouver: Coaching to Win

Dallas controlled the majority of the game, while Vancouver had no answer for the Hoops' crafty midfield. What contributed to the win?

Share All sharing options for: The Monday After Vancouver: Coaching to Win

Another week has gone by, and another game has been won, further cementing FC Dallas' place as league leaders. While the game had its fair share of issues, mostly in defense, I think FC Dallas can be pleased with their performance. As Drew pointed out in his earlier post, this was as complete a performance as we've seen from Dallas all season long, with a little bit of coaching help to get them over the finish line.

This is where the coaching bit comes in as Schellas Hyndman did a solid job preparing his boys for this one.

Vancouver's strategy was evident in the first half, and it was similar to what Whitecaps fans around the twittersphere/blogosphere expected. The Caps pinged the ball around in the back repeatedly, both long and short passes, in an attempt to get FC Dallas players to chase the ball and as a result open themselves up for a counterattack.

When you see a team staying behind the ball and looking to counter, it's usually for one of two reasons: either they believe they will lose the possession battle, or they are trying to save their legs. FC Dallas seemed to expect Vancouver's bunker and counterattack plan, so why chase them around and play into their hands? They didn't.

Despite Vancouver's tempting efforts, Ferreira and co. refused to chase the ball. The Whitecaps were trying to manage their stamina, a consequence of having an important Canadian Cup match this week against Edmonton. It was not a bad strategy on the Whitecaps' part (saving their legs, hitting FCD on the break), but Dallas anticipated their plans and waited before the ball was well in their half before really pressing. Since they allowed Vancouver to keep the ball in the back, that left Heinemann and Hurtado completely abandoned at the top.

Since we are all about criticizing the coach when he has some confusing or bizarre substitution, we might as well give him credit for anticipating and preparing for Martin Rennie's gameplan. Setting your players up for success is your only job as a coach, and in this game Hyndman did just that.

The Whitecaps noticed their opponents weren't biting, and as a result the Hoops pretty much controlled the half after the 20th minute, with only a few chances falling Vancouver's way. While those chances were of the promising sort for Vancouver, Dallas defenders were (mostly) up to the challenege. Raul Fernandez had a few scary spills, including one cross he failed to retain after he got both his hands on it. That could have been lethal, but luckily it didn' result in a goal.

The game had a few flat-spin moments, namely where around the 70th minute the boys began conceding foul after foul in dangerous areas, but once Castillo was brought on they managed to regain their composure (when has that ever been said?). The dreaded late-game meltdown never materialized, and all fans breathed a sigh of relief. 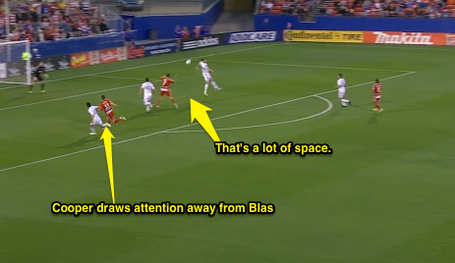 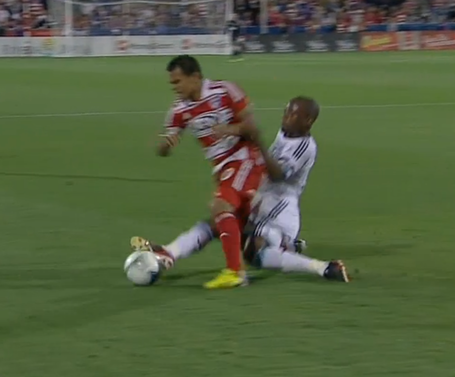 The win will allow for a nice and relaxing week, one where FC Dallas can focus on shoring up what deficiencies remain on the squad while maintaining a good feeling around the locker room. And while all this winning is fantastic, Hyndman now has to start guarding against complacency in his squad.