FC Dallas hopes to continue their five-game unbeaten run against the 2-2-2 Whitecaps.

FC Dallas hosts the Vancouver Whitecaps Saturday evening in the first of two games between the two clubs this month. Next week the two clubs will meet again in Canada.

Vancouver comes into the match on a 2-2-2 record for the season. Their last two games have been draws with their last win coming back in Week 2 against the Columbus Crew. Vancouver has yet to win a road game this season and Martin Rennie's club have yet to win in Frisco since joining MLS a couple years ago. Vancouver hasn't won on the road since last July, when they went into Colorado and beat the Rapids on the 4th of July.

It should also be noted that Vancouver has a midweek match in the Canadian Championships against Edmonton next Wednesday as well.

Fouling Ferreira. The David Ferreira fouls suffered count continues to push higher and higher as the season moves forward. Last week against LA he suffered five fouls, three in the first half. On the season he has taken in whopping 24 fouls. Vancouver has a couple guys in the field that will be prime targets to add to that tally this weekend. Nigel Reo-Coker has committed 12 fouls on the season, he leads the way for the 'Caps in that department.

Taking chances. While FC Dallas is leading the league in goals with 11 goals on the early season, the big reason has been the shots taken are much greater than before. I mentioned last week that the team is already getting a good number of shots on goal and those leading the way are Jackson Goncalves (17 shots), Andrew Jacobson (11), and Kenny Cooper (10). The old adage goes something like "if you don't try, you won't score." Well, FCD is trying and scoring so keep it up.

Latest from BDS: Where to Watch | Injury Report

The 'Caps are a tricky team to figure out this season. With two wins, two losses and two draws, it may be a big hard to figure out when team will show up for this one.

Vancouver has given up seven goals this season with five of those seven coming from within the penalty box. Rennie's team has done well to create chances of their own too.

Rennie likes to use a 4-3-3 system that sometimes appears more like a 4-2-3-1 formation. Here is who I am projecting as the starters later this evening for Vancouver.

The Whitecaps do well in the possession game. In their last four matches they have out possessed their opponents. Vancouver has a good amount of skill in their midfield with Kobayshi and Camilo. Between the two of them, they create more chances for their attack and if Mattocks ever gets going, they could be a very dangerous team on the ball.

Defensively they are missing their best player in Jay DeMerit but guys like O'Brien and Rusin have stepped up well since DeMerit's injury happened in Week 1. The 'Caps may also have one of the best fullback pairings in the league as both Lee and Rochat are very talented players that do well getting forward. 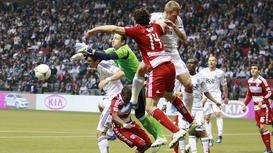 Brian sits down with the Whitecaps' Blog 86 Forever to talk about tonight's match.

Speed and skill to burn. With Mattocks running around up top, the Whitecaps have speed up front and on the wings that is very dangerous. Throw in the fact that they have young guys like rookies Erik Hurtado and Ketuka Manneh and the speed can be very dangerous. But the skill is also something to be talked about as well. Kobayashi and Camilo are both very crafty and yet very skillful players on the ball. Last week against RSL, Camilo had seven shots in the game, way more than anyone else and five of those were on target. The dude is just dangerous.

Possession and movement. Both teams love to possess the ball as much as possible here. Vancouver is good on the ball and very fluid in their passing. The end result has been lacking though for them this season as they haven't been able to really get their offense going as much as Dallas has been. That is something Schellas Hyndman will need to key in on with his defense. Michel and Jacobson need to have a commanding sort of day in the midfield to keep their skill players at bay while allowing defenders like George John and Matt Hedges the ability to clean things up.

Force them wide, make them foul. In a way I would love to see Dallas make Vancouver chase the game tonight. Make them run all over the field and get tired, causing them to foul in good spots. Dallas has been almost clinical this season from the free kick spot and getting those chances will be big as Dallas has a good size advantage.

Playing smart. On the flip side, Dallas just needs to play smart and play their type of game. In instances where Dallas is able to just play their style of game, fluid with passing on the flanks with dangerous runs up front by Blas Perez, we've seen good success. Vancouver is talent and won't give up easy but Dallas cannot allow them to press late and hunt for a chance. They are too talent to give up easy possession to.

Given the schedule the Whitecaps have over the next couple of weeks, I like FC Dallas' chances in this one even more. I honestly didn't know about their Canadian Cup match for next week until this morning and that does open up some good chances for Rennie to play things too safe here. I know how important that Cup is to them and it could mean that they will take their foot off the pedal as well.