Capitalizing On a Great Start: Leaders Push the Club Forward

The Toros find themselves in an excellent position to start the season, and the team's leadership is a major reason.

Share All sharing options for: Capitalizing On a Great Start: Leaders Push the Club Forward

For a team that started the season with tempered expectations, March has been an excellent start.

FC Dallas have just completed their best opening month under Schellas Hyndman, as well as the best opening in club history. With 12 points out of five games, Dallas find themselves in sole possession of the #1 spot in the Western Conference, and at the top of the table in the Supporters Shield race.

Things are about to get more difficult though since, as Drew's article pointed our earlier, the following month sees a spike in difficulty. The LA Galaxy now boast a re-invigorated Landon Donovan and they might even have a healthy Robbie Keane by the time the Toros meet up with them in two weeks' time. The Vancouver Whitecaps meanwhile are no slouches, and while hardly the best team in the league, playing them away at BC Place is always tricky.

Toronto has improved from last year, and just this past week they almost defeated the LA Galaxy. Only a spectacular, last-gasp goal separated Toronto FC from a victory against the reigning champions. FC Dallas had trouble with TFC last year, that should remind us fans that no game is an easy three points. None of the games in the month of April are easy and Dallas must show resiliency if they are to hold on to a top three spot.

As has been mentioned in the comments, the Hoops have not yet played their best soccer this season and most of their wins carry circumstances that diminish the quality of the victory.

The win against a mediocre Colorado came due to Steward Ceus' titanic blunder.

Real Salt Lake played their "B" side and still managed to put up a fight.

New England cannot score to save their lives, despite being defensively sound.

FCD should not be held responsible for the quality of their opponents, but there is no denying that the only real test they have faced this season is the Houston Dynamo, a test which they thankfully passed, albeit just barely.

Luckily, leadership on the team seems to be growing at a time when a young season needs it the most. The sense of accountability that was greatly lacking last year is returning, with Andrew Jacobson, George John and David Ferreira all organizing the team in their respective areas, whether vocally or by example.

George John has been playing at a level that rivals that of the league's best. He has cut off dangerous passes in a routine fashion, scored timely goals, has controlled the penalty with authority yet without fouling, and has defended the air around the box with the ferocity of a SAM battery. Jacobson has been excellent as well, with his incessant harassing (reminiscent of the Good Daniel Hernandez) being primarily responsible for shutting down the Revs' midfield this past Saturday.

Finally, one of the more understated developments has been Ferreira's effect on young Fabian Castillo. His mentoring cannot be oversold, as the speedster has frequently mentioned the great respect he has for him, and the change in Fabian's attitude is clear. 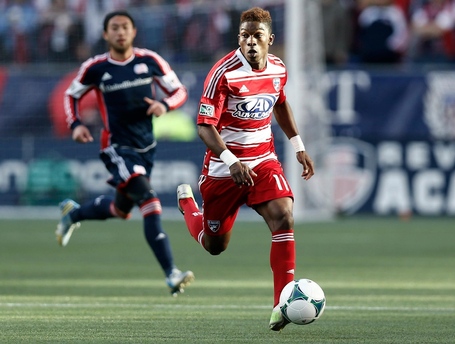 As opposed to his petulant pouting from last season, when at times he visibly quit on the team (Columbus away comes to mind), Castillo v. 2.0 races up and down the field the entire match. He has also started passing the ball more, is no longer easily discouraged, and while his results vary, his desire to win as a team is no longer in doubt. That's a lot of maturing in one year, and it has helped him to become much more effective in possession this season.

It's not just the leaders that have stepped up their game either.

Zach Loyd has put out otherwordly efforts this past month, using his fitness to terrorize the right side along with Jackson. Jackson has toned down his habitual rashness and is arguably Dallas' best player so far. Even Jair Benitez, who many were willing to write off after seeing Michel at LB, has kept his cool and patrolled his flank with effectiveness.

Jair's newfound control over his emotions is not just a result of greater team discipline, but also comes from a greater sense of responsibility to the team that better leadership breeds.

If those individual improvements aren't enough to help you feel optimistic, the defense as a unit has impressed around the league and is the bedrock that will help keep this team glued together should the scoring fail to materialize. The back four are the most important component of this team, and if they continue to play at this level, good things will happen in April.

"They haven't played their best yet" is the most common descriptor we've seen when reading about FC Dallas.

Just imagine what it will be when they are all clicking together.

It's time for Dallas to show the rest of MLS that they are a team to be taken seriously.