Schellas Hyndman: Sloppy Play Has To Be Fixed

Share All sharing options for: Schellas Hyndman: Sloppy Play Has To Be Fixed

The start of the season for FC Dallas has been good by most accounts. Folks around the league are finally taking a serious look at what FC Dallas is doing right and more importantly what they are doing wrong on the field.

The big test for Dallas will really be within the next two weeks. The club will host the Vancouver Whitecaps on Saturday and then travel to Vancouver the following week. For the first time a club will actually already have a full scouting report on FC Dallas from actually playing them. Vancouver won't have to rely as much on their video scouting of other games as they will have a real game against FC Dallas to work off of for when they return home.

I bring all of this up for something that I mentioned in my five point recap of the LA Galaxy game.

There have been some moments in each game this season that have been rather sloppy. I'll give the defense and midfield some credit for the first month or so of the season but as we move forward in the season, sloppy mistakes have to be corrected.

After the 1-0 win over the Galaxy last week, head coach Schellas Hyndman was quick to address the issue.

"It is a huge problem," said Hyndman. "You're up a man, trying to attack, trying to counter attack. Sometimes you don't realize that they are just waiting in the gaps, inviting you to make those passes."

That lackadaisical mentality could come back to bite the team in the butt down the road. Hyndman said it would be something that the club would address. One area that that he hopes to see improvement on is the constant need for going back to keeper Raul Fernandez.

"The thing we have to understand is that going back to the keeper like we did in the first half, too much, we put ourselves in bad body positions," said Hyndman. "We were scared to make a mistake."

Between the back four (Zach Loyd, Jair Benitez, George John and Matt Hedges), Fernandez, Michel and Andrew Jacobson, I went to the Chalkboard to see where things were sloppy. I left Fernandez out of the screen shot here as most of his unsuccessful passes were from goal kicks - something you should expect in any game from a keeper. 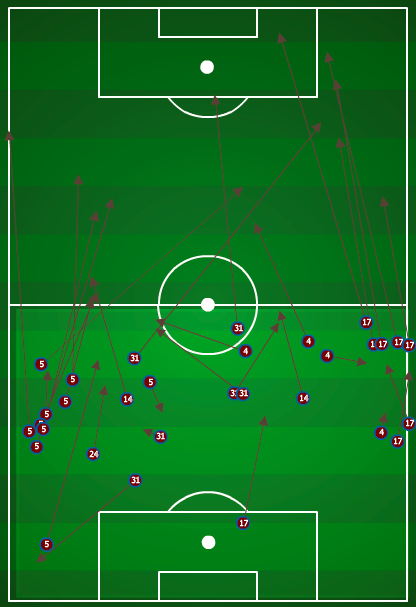 You'll see from here a lot of short passes that were broken up along with a good amount of long balls that failed to reach their target. I zoomed in on the defensive portion of the field though. Hyndman stated that he was frustrated that once FC Dallas went up a man that the team sat back too much and were lazy with their passes.

"Because there isn't an immediate pressure on you, you fall into that lackadaisical mentality," said Hyndman. "I think there were probably three or four times that we gave the ball away where they could have very easily scored."

Thankfully we know that things will get sorted out in the long run. Hyndman knows that his team is learning how to deal with the pressure from the other clubs as they've faces different looks already this season. Whether it be speed like Real Salt Lake had or the up-tempo possession that Chivas USA brought, Hyndman has been able to see a lot of different looks that should help him and his staff out for fixing this problem.