The Galaxy are the lone unbeaten team left in Major League Soccer.

LA is the lone unbeaten club in MLS at the moment with a 2-0-2 record on the season. 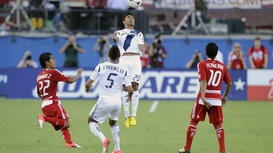 State of George John. Is he 100%? Time will certainly tell but given the fact that he wasn't listed on the injury report this week is a good sign that the club did the proper steps to make sure his head injury wasn't a big enough deal. Having him for 90 full minutes will make a difference in this one.

Fouling David Ferriera. I'd imagine the likes of Marcelo Sarves and Juninho will be all over Ferreira in this one. DF10 is the most fouled player in the league at the moment with 19 fouls suffered.

Shots on goal. FC Dallas has got a pretty high percentage of their shots on goal to be goals this season. 34 of the 69 total shots have been put on frame so far this season, good for almost 50%. Just to put that in to perspective, the last three seasons combined for the club in this category (shots to shots on goal) was 34.5%. Of those 34 shots on goal (a league high at the moment), 10 have gone in.

LA landed in Dallas on Thursday just shortly after their loss to Monterrey in the CCL on Wednesday. Bruce Arena has a pretty full strength lineup now that Landon Donovan has returned and Robbie Keane is healthy again.

More: My scouting report for FCDallas.com

The Galaxy used a full strength squad in Monterrey on Wednesday and I would imagine we'll only see a change or two from that line up.

Here is what I would be expecting today in Frisco when the Galaxy step out on the field should Arena use his best lineup:

The one change I have from the Monterrey game was Magee, who got some rest before coming onto the field in the second half. LA also has Michael Stephens, Jack McBean and Jose Villarreal on their bench that could start as well. I just see Arena using a top lineup in this battle despite using these players on Wednesday. If any club in MLS can handle this kind of turn around, it is the Galaxy.

There has also been some talk that second year defender Tommy Meyer could get the start in place of Gonzalez as well. That would be a huge difference in the back if that were to happen.

Magee was the MLS Player of the Month for March and has been a thorn in the FCD side over the last couple of seasons including scoring the lone goal in the last home loss for FC Dallas back in late July.

High pressure. LA will be tired no matter what going into this game. They have extra miles on their legs from being down in Mexico and while they did do the wise thing with their travel by just coming to Frisco straight from Monterrey, the milage will take a toll on the team in this one. Dallas will want to pressure early and often in this one by making LA chase the game as much as possible. Dallas has done a good job so far this season at scoring an early goal in the first half.

Be aware of the counter. LA is a team that loves to counter. In a way it has been their bread and butter for a number of years as they do well in possession but always seem to do even better on the break away. Keeping a mindful eye on Keane, Donovan and Magee will be really big in being able to slow them down. But more importantly, not giving away a silly ball in the defensive third will go a long way in keeping their offense at bay.

Full 90. The last couple of games we've seen Dallas do fairly well and the unbeaten streak is currently at four games. But the fact that teams have hung around in late game situations against FCD is troubling. LA is a team that does well throughout the full 90 minutes and will be a team that can hang around too. Against Toronto two weeks ago they got a late goal to tie things up.

I feel like this one could be a draw given how poorly the club has closed out games lately but I think the tired legs play a big factor in this one for LA. It will be a close battle, just like all LA games are but I like Blas Perez to continue his form and score the game winner here.