After much internal handwringing, Hunt Sports Group has finally shelled out enough money. Thanks to a surprisingly generous infusion of cash, FC Dallas now hold the answer to their depth problems at midfield.

Perhaps you have seen the rumors going around twitter, picked them up at supporter's clubs during tailgates, or heard them whispered in hushed tones from employees at FC Dallas. All the speculation has been vague and inexact, but it all conveys the same message:

"Dallas has finally found the answer at d-mid".

Fernando Clavijo has been burning the midnight oil to get this done on time with both sides finally coming to an agreement.

The news out of 9200 World Cup Way is that the Hoops have just finalized a contract with the organization's best kept secret: a massive, bruising homegrown talent that has been seen around FC Dallas training grounds for some time. His preferred position is defensive midfielder, but he has been known to play centerback and, at times, cheerleader and Official Referee Chastiser.

Tex Hooper will be wearing number 96, as always, and has already started training with the First Team. 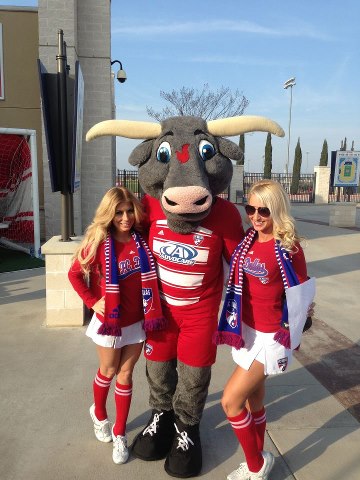 "When Julian left the club after a fantastic but short-lived stint with us, we knew we could not afford a drop-off in quality. As soon as we sold Brek, we started looking at all our options with the coaching staff, and really Tex was the choice that made the most sense. He's homegrown, so his salary won't count against the cap, and he also has the added benefit of being immortal.

It's a big deal considering the difficulties we went through with injuries last season.

If anything happens to him we have a giant stack of costumes ready to go at a moment's notice. The medical staff have already been training on how to quickly replace any injured parts, so any on field incidents should be quickly resolved by a little gatorade and a new body part."

Schellas Hyndman also had this to say from his office:

"Really, what Tex brings to us is size and hard work. Horns too, those are important. He's a pretty big guy. Consider that you average rodeo bull is 2000 lbs and then think like an opposing midfielder. Do you really want to try and challenge him for the ball? You're just as likely to bounce off him or get kicked in the gut than you are to retake possession. He doesn't tackle so well, because he's too large to be nimble and precise, but I've seen grown men drop the ball and run away at the sight of him charging, so he certainly has his strengths.

It's a big boost to the team definitely, and we're hoping that when we face Sporting Kansas City during the summer that Tex will push Sporting's boys around. That will help give us some breathing room to build out of the back. With his unique skills, maybe he can gore Aurelien Collin's lower intestine for us or give him a good, hard hoofing to his shin. You could call it "cheating" or "violent" if you like, but Sporting engages in that behavior on a regular basis, so having a player to protect our guys is really important to our system. He does whatever it takes to win, you know? That's a great sign for any new player, so we're really excited to have him."

The single biggest factor to consider is how little Tex will require as far as salary goes, making this a very low-risk, high-reward signing. While his numbers and terms cannot be disclosed per MLS rules, it has been suggested that his salary is as little as a field of grass, a weekly night out with the FC Dallas Dancers, and some healthy cows from good stock to "further his issue".

There has been no word on whether Hooper will be available for selection this week against Toronto, but TFC midfielder Jeremy Hall was reportedly last seen crying on the practice field, begging coach Ryan Nelsen to leave him on the bench this week.