Was Je-Vaughn Watson The Right Guy For Opening Day?

Looking back on Saturday's 1-0 win over Colorado showed what newcomer Je-Vaughn Watson brought to the table.

Share All sharing options for: Was Je-Vaughn Watson The Right Guy For Opening Day?

We know the 4-4-2 formation is going to be a bit of a work in progress for FC Dallas here in the early stages of the season. We just know it. Either the offense will struggle due to shape or the defense will be under pressure due to lack of possession and counter attacks.

Whatever it may be I have been racking my brain about the subject ever since Saturday evening. I went back and re-watched the 1-0 win over the Colorado Rapids. The resounding talk continued to be why did Schellas Hyndman opt for newcomer Je-Vaughn Watson over Bobby Warshaw for the starting midfield spot next to Andrew Jacobson?

The question kept going through my head over and over again. And the more I watched the tape (okay, in this sense digital tape...do we even tape anything anymore?), the more I questioned this move.

All week at practice we tried to work on it and sort it out and this is the first time Je-Vaughn’s played with us so, it was a little bit weak and erratic at the beginning but I thought it got better as the game went on. -Hyndman on Watson's performance

For starters, Watson had only been with the club for a couple of weeks. His newness factor was still pretty high and his familiarity with his teammates was still fairly low. His knowledge of the system that Hyndman likes to run is still fairly low as he wasn't able to link up well enough with Jacobson in the middle and didn't seem to be able to distribute the ball well enough to the wings with David Ferreira and Jackson.

Warshaw on the other hand had been the starter along side Jacobson for the final two preseason games while Watson got a day or two in practice with Jacobson.

I'm not totally knocking the guy down here with this piece so stay with me for a moment. 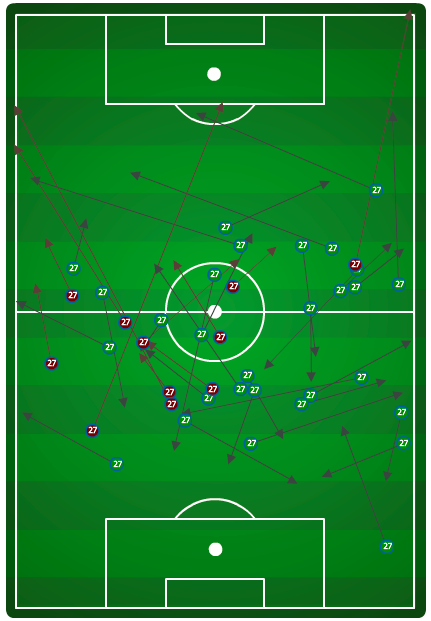 It may have been just one game but the play between him and Jacobson was not what Dallas needed in a season opener. Looking at his passing stats Watson did have a decent ratio of good to bad.

The good passes are in green while the bad passes or unsuccessful passes are in red. Watson had 29 good to 11 bad on Saturday against Colorado.

A lot of his unsuccessful balls as we'll see were also long balls. Nearly half of the bad passes were long balls that failed to reach their targets. Not the worst thing in the world but it also illustrates the issue that Dallas has on offense at the moment in this early portion of the season.

Along with his unsuccessful passes were the fact that Watson was dispossessed in the midfield 17 times and he also lost the ball on a dribble once. Most of his tackles for loss were in the same area that he turned the ball over on a bad pass. 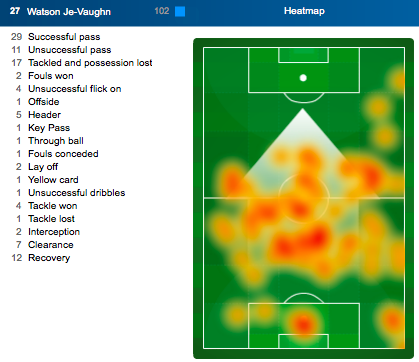 You'll also see that Watson covered a good bit of ground in this game. His heat map was also pretty interesting to look at as he covered a ton of space on the in the middle portion of the field but didn't go too far north of the center circle. For a guy that could backup Ferreira in the attacking midfielder role, not seeing him push up also showed some of that uncertainty with playing alongside Jacobson.

Obviously this is the first game of the season and some rust, nerves, etc. were part of this showing. His turnovers didn't cost the club in the end but they also didn't help the club out entirely either (not like turnovers actually help the team out anyways).

We can't gage too much as to whether or not Warshaw would have been. Warshaw only saw the field for few minutes in the dying portion of the game. Just in that brief time Warshaw was only able to have one successful pass and two clearances. Good but not nearly enough to go on.

Had this move totally killed the game and caused Dallas to lose on Saturday we would be ripping it to shreds. But I'm willing to give Hyndman and Watson the benefit here. It wasn't the worst we've seen out of a midfielder in the last couple years here. At least by the end of things he was able to settle down and do some good for the club.

What did you all make of Watson's debut? Would you have rather seen Warshaw? Or do you think he did enough to keep the starting role?