Where Will More FC Dallas Fans Come From?

How the population layout of the areas surrounding Frisco affect plans to continue positive growth in FC Dallas Stadium attendance.

Share All sharing options for: Where Will More FC Dallas Fans Come From?

While the on-field results to start FC Dallas' 2013 season have been promising, attendance numbers are a mild concern. While there have been improvements in recent years, as fans of this club, we've all heard the criticisms of the drawing power of our favorite team.

Surely the club was aiming to sellout both the home opener and a rival game like the Dynamo. To be fair, last year's season opener (which had 20,906 in attendance) was against a New York team that is much more marketable than the Rapids, and Houston's last visit to Frisco was only played in front of 16,709. Meanwhile, 11,181 should be unacceptable for any match that takes place on a Saturday or Sunday, but RSL isn't usually a big draw either, with only 10,069 showing up for their only 2012 visit on April 25.

Everyone has heard complaints about the location of FC Dallas Stadium. Per that script, FCD was destined for mediocre attendance the moment they broke ground in Frisco. Going into this season such naysayers would have been ignoring the fact that attendance in Frisco has increased each of the last three seasons. However, geographic context is absolutely relevant to the prospect of the club building off of their momentum at the turnstiles.

Census data in the areas surrounding FC Dallas Stadium illustrates the context for the FC Dallas customer base pretty well. Brandon Martin-Anderson, a mechanical engineer, mapped a dot for every person in the United States. Here's the result of zooming in on Northern Dallas suburbs: 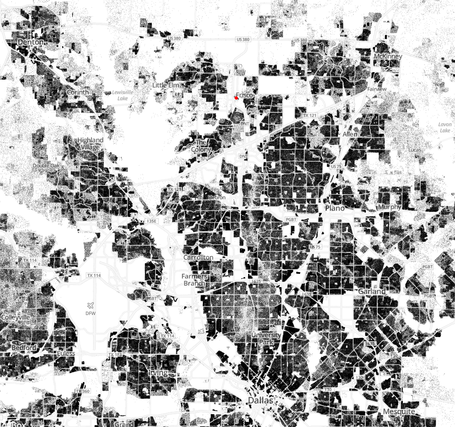 The red dot is roughly the location of FC Dallas Stadium. For the best zoomable view of this map, follow this link to the original, which you zoom in, and out, move around, or even take a look at the areas surrounding other stadiums. Also, you can buy a print of East Texas, or download a massive image of the same.

It is problematic that very few people live North of the stadium, and very few people that live within walking distance. However, there are plenty of high-population area nearby to the East and the South, and a few to the West (though Lake Lewisville probably slows down their drive to the stadium.

This stadium is here to stay, so the focus of the FCD marketing team, and any fans who are trying to recruit diehards, should probably be these areas. Hopefully this isn't news to the club, who surely know the demographics and locations of their season ticket holders very well (and it would be fascinating to see where they or on the map).

So, what can we as fans do to with this information? If you know a few sports fans who would be open on some level to giving FC Dallas a chance on some level, make a particular point to reach out to those near the stadium. Logically, they are more likely to say yes in the first place, and probably even more so to keep coming back.

Rule of thumb, right click near on your friend's home on this Google map, choose "Directions from here," and recognize the kind of round trip you're asking your friend to take.

If anyone wants to go above and beyond, FC Dallas is offering a 10-pack of tickets for only $99 to any of the 14 home matches remaining on the schedule, but you have to buy it today or tomorrow. You don't even have to designate which match at the time you buy. Buy a pack, invite lots of nearby buddies, and show them a great time.

Really, now that the supporters sections have upped the atmosphere on game days, we just need to get a few more people to come once. Even on TV the chants and excitement are infectious, and the club should see more returning fans that get addicted to the experience.