A tale from Mexico City

Share All sharing options for: A tale from Mexico City

On the morning of the biggest World Cup Qualifier of the cycle (it is until we win there), I wanted to share with you my adventure in Mexico City from four years ago to get you hyped up for tonight.

As is the case for most of my schemes, it started on a night at The Flying Saucer as myself and the great Warren Abao, with a few pints in us, made a pact to go to Azteca. We promised each other that we'd go and sure enough, six months later, I arrived at Warren's place way too early in the morning and we were on a plane to Mexico City. 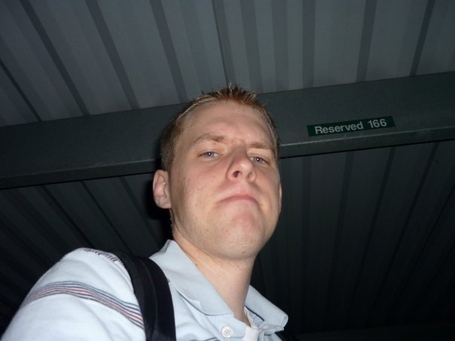 For whatever reason, the Mexican federation decided to have the game at 3PM on Wednesday afternoon, so we flew out Tuesday morning with the plans of exploring the DF a little bit and picking up our tickets. Now back four years ago, there was a company called OleOle that ran a ticket package for this game that was something like $250 for a ticket and bus ride to the game and back to the hotel....seriously. I bought myself and Warren upper deck tickets for $15 each on Ticketmaster and our subway ride was about .15

The problem was, my Spanish, while improving, was still quite gringoish and finding a Ticketmaster outlet in the DF to pick up these tickets was proving to be quite the struggle. We subway'd it around the city getting rejected at a couple different places and the clock was nearing 5pm when most of them close. 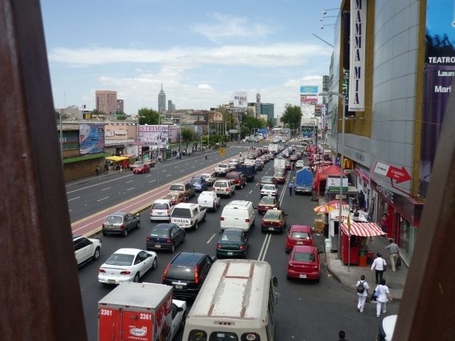 Given that the game was at 3PM and most of the Sam's Army (AO was still a small twinkle in the eye of a few passionate people) contingent was meeting up to ride the subway to Azteca at 11AM the need to get the tickets before end of day was quite dire. As it turns out, the outlet we finally had success at was less than a mile from where we were staying in the Zona Rosa (doh!).

With tickets in hand, it was time to fill our bellies. Fortunately, by this time, the great Lorenzo and his son Christian had arrived from Dallas and we had a spanish speaker in our group to guide us around. 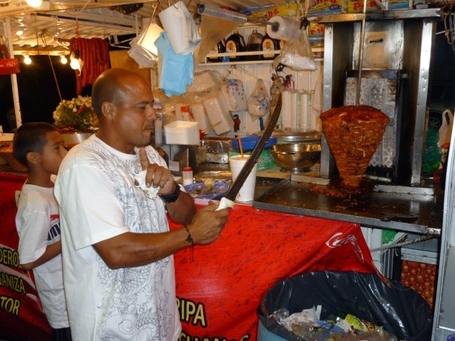 After a late night, we got up early, met with the rest of the Americans that chose to take the subway and were on our way. 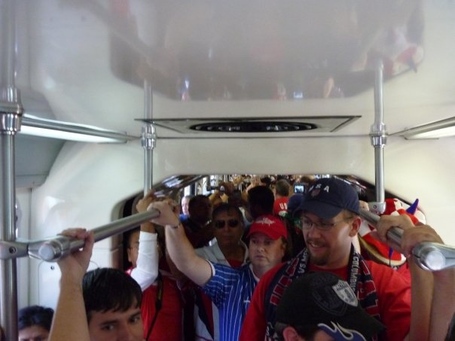 Despite arriving over three hours before kickoff, the action around Estadio Azteca had already reached a fevered pitch. In the legendary stadium, the massive upper deck is general admission while the lower deck is reserved seating so there were already thousands of people outside the stadium with horns, whistles and everything else you can imagine. 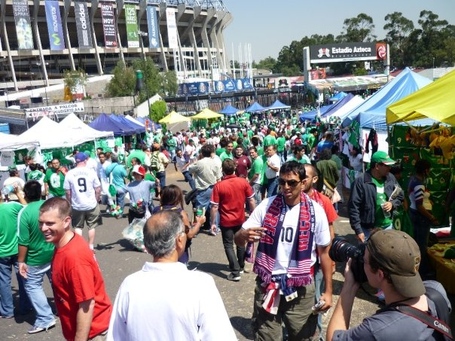 For awhile we teemed around without much notice, though someone got the bright idea to start chanting and things began to get a little bit wild. 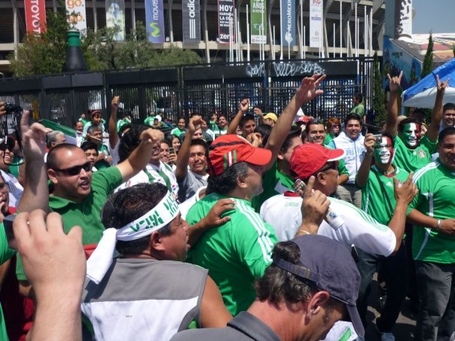 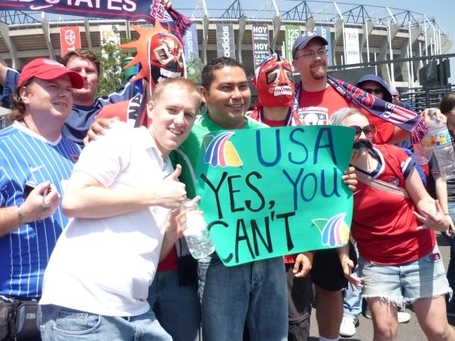 They brought the riot police to lead us to our section and everything started to become very real. 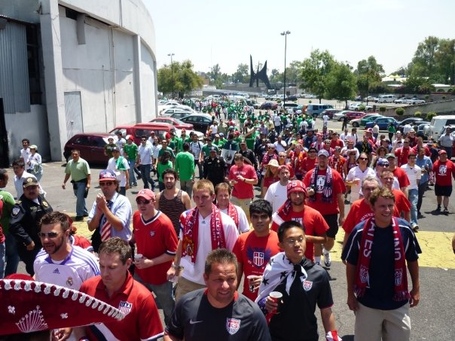 When we got up to our seats and the probably 25,000 people alrady there two hours before the game saw us, the whistles echoed around the stadium in one of the more exhilarating experiences of my life. 200 people walking into a stadium that seats over 100,000 and we elicited such a response. 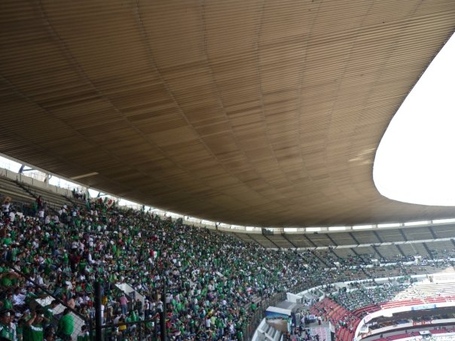 There were riot police on both sides of us, though one side had the barbed wire fence too. 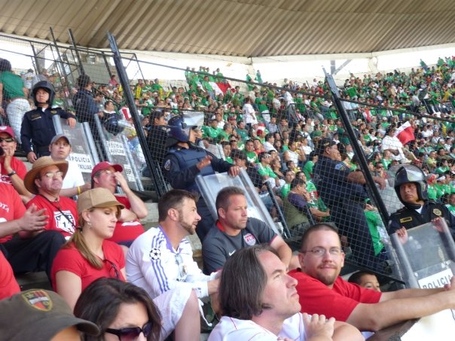 The two hours ticked away rather quickly, the teams came out and it was go time. 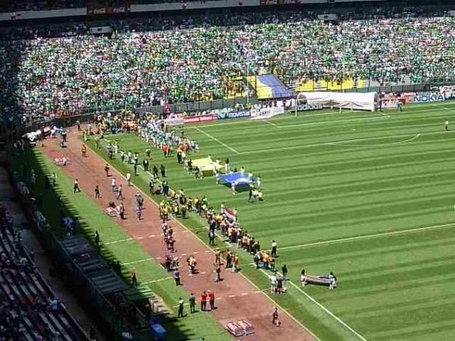 To be honest with you, during the match I barely took any pictures. I was really just standing in awe for 90 minutes of what a stadium of 100,000 people passionately watching the beautiful game, life and death with every moment, was like. When the United States scored, it was a feeling of Ecstasy that made the whole trip worth it. After booing and whistling through the national anthem and throwing countless objects and "beer" at us, the stadium got silent, if only for 30 seconds. The most beautiful 30 seconds of the game.

Of course, Mexico came back and scored prompting showers of debris on us...really any time anything of note happened we got showers of debris...but I didn't care. That's part of the experience, you know what you're signing up for stepping into the belly of the beast representing the Stars and Stripes.

As I'm sure you know, Mexico won the match 2-1 with a late goal and, looking back on it, that goal was probably a blessing in disguise. We were bummed about the loss, but the US represented themselves well and we could now get out alive.

The walk out of Azteca was one of the wilder parts of the whole thing. I didn't take this video, but I must've been standing right next to this guy because this is a taste of what it was like.

The policia made this bizarre box in the parking lot, marched us into it and then moved with us through the lots where tens of thousands of people were leaving. It made for some hairy moments as fans still chunked stuff at us and I must admit this part was probably the scariest of all. 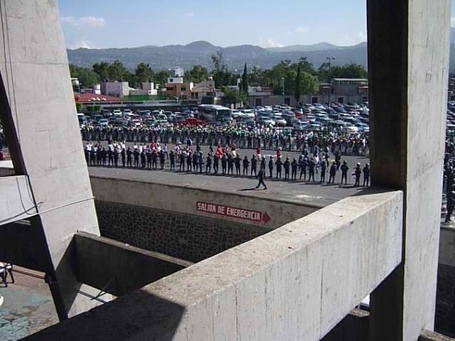 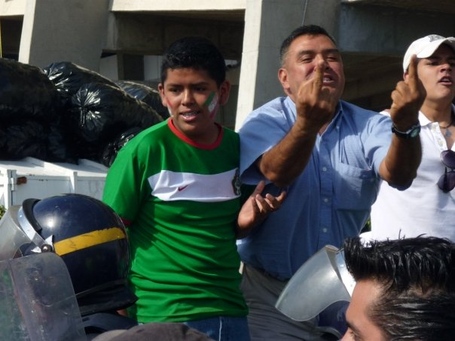 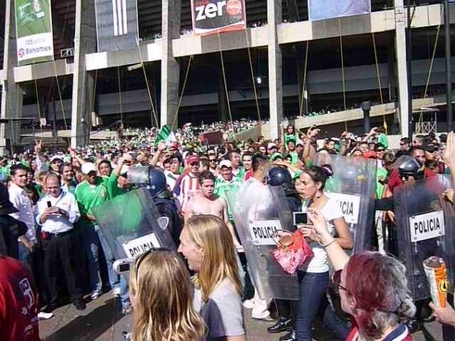 Thinking we were going to be taking the subway home, the police didn't allow it and marched us into a riot van. Now this was one of the most fun parts of the experience as there were probably 25-50 of us packed into this van flying around the city with American flags hanging out the sides singing every song in the book. It was an amazing once-in-a-lifetime experience combining culture and soccer that I'll never forget. 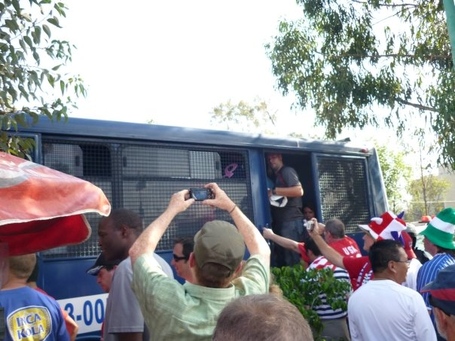 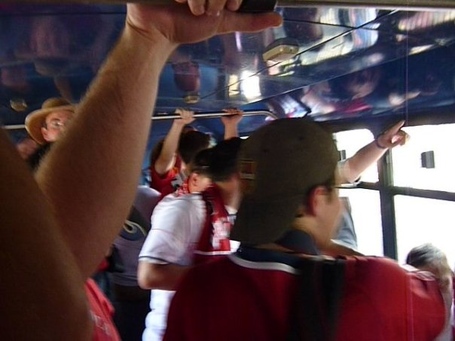 That night in Mexico City, I'm not sure I paid for one beer as the overjoyed Mexicans were more than happy to buy for the gringos now that the 3 points were in the bag. The next day, we bussed it out to Teotihuacan to see the amazing pyramids and then that night we were back at the airport. It was an amazing experience that any diehard soccer fan should experience (though not for the squeamish) and I'm sure there will be dozens more stories like mine popping up in the next week as the Americans arrive back from the DF tomorrow. 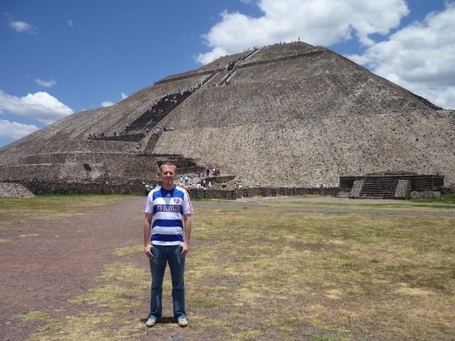 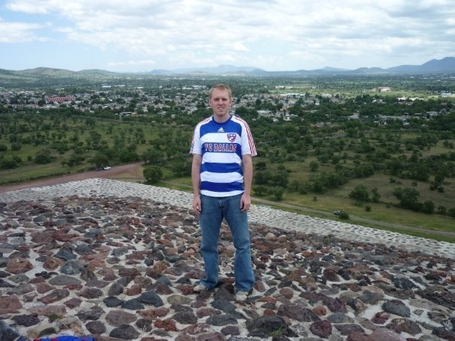