A Look Back at Michel in the Midfield

Did it work? Yes and No. A look back at Michel in the midfield against the Houston Dynamo.

Share All sharing options for: A Look Back at Michel in the Midfield

We talked about it a lot on Sunday. The changes in the lineup for FC Dallas were pretty big. On one hand you had Blas Perez back in the lineup. On the other hand, you had guys like Kenny Cooper on the wing and Jair Benitez in at left back.

"They've only had one game together, one practice together," said Hyndman. "This was something I put together on the eve of this game. It was one of those nights that you can't sleep. So as it turns out, I thought Michel did well for himself there and it was able to get a good player like Jair [Benitez] back on the field."

I do think this is a good temporary fix for Hyndman. Michel reads the game well and he does well at winning the ball. He allowed Andrew Jacobson to have arguably his best game in ages with FC Dallas too. We've been talking for a while now how Jacobson needs to step it up and have a big game, well against Houston he did. In my eyes, it was due to the play of Michel. 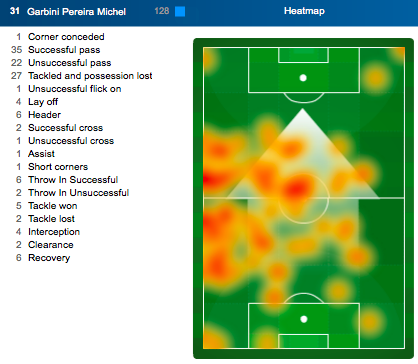 To me there were too many give aways from Michel to be a true central midfielder.

Taking a look at his heat map and chalkboard stats, Michel gave the ball away 22 times on Sunday while having 35 successful passes. Daniel and I were joking in the press box during the game that the majority of his good passes or successful ones in this case were straight to David Ferreira. There is nothing wrong with that but it also points out what the strategy on Sunday was - get the ball to David.

Oh and there was the time that MIchel got beat on the end line which helped lead to Houston's first goal. Yeah, not so good there.

I really liked the bite that he had. We'd tell him to bounce out and he'd be right there. He did a great job. - George John

Like I mentioned before, he made Jacobson better on Sunday. Not to mention once he was subbed (why sub him Hyndman? Why?), the steam was taken out of the middle of the pitch. Je-Vaughn Watson just wasn't able to add a whole lot and more importantly the fluid play in the middle was gone.

Defensively he was where Dallas needed him to be for the majority of the game. He won balls (four interceptions, five tackles won), made mostly good passes and was good on recovery.

Naturally the day for Michel will still be remembered for the ball that he put in to Cooper in the dying moments of the game. His perfectly weighted ball from distance showed why Hyndman has faith in this Brazilian player. Not to mention his teammates do as well.

But lets just go ahead and put it out there, this isn't a move that will be a season-long thing for Hyndman. While Michel was able to come in and do well after a few minutes in the game, there were still a few spots where he didn't show that he is a true central/defensive midfielder for this team. He is better from the flank, most of his best work on Sunday came from a wide position.

The good thing in all of this is that he does bring some competition to the field in both the central midfield spots and still at left back. This was a good believe it or not that needed Benitez at left back and in the end it was worth it having Benitez there to start the game.

Michel needed to be out there as well and Hyndman's gamble paid off in the end.