Breaking Down the Breakdown: Agudelo's Goal

Share All sharing options for: Breaking Down the Breakdown: Agudelo's Goal

So what happened on Sunday afternoon in LA? FC Dallas was cruising with a 1-0 that they had nearly doubled and things seemed to be headed for six points from the first two matches for FCD. As we all know, they ended up conceding three times in the last 25 minutes in the 3-1 loss and I thought it would be interesting to do a goal breakdown to see exactly what happened on the Juan Agudelo goal because there's a lot going on in this one.

The ball starts out with Dan Kennedy 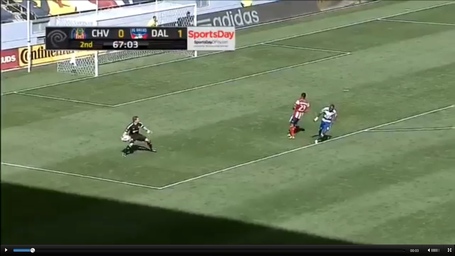 Kennedy finds Walter Vilchez with a huge amount of space on the right as you can see Jackson in the first screenshot meaning there's basically no one out on the right. It's space that Vilchez is more than happy to exploit all the way to the halfway line. 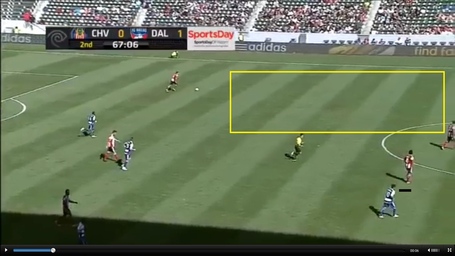 Now this third screenshot may be the most important of all. Watson's pressure on Vilchez is half-hearted but the most important thing is the run Tristan Bowen is making to check up for the ball. It's a run that, while not terribly dangerous, is one that George John has to respect and it pulls the center back out of position. Agudelo, out of the frame, makes a smart run behind. 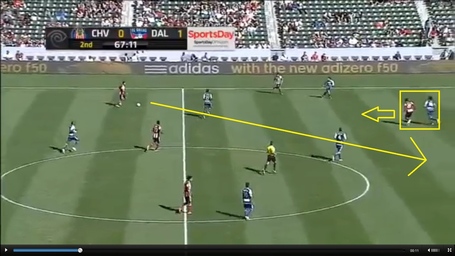 As the ball is played, Matt Hedges makes his first little mistake as he, just for a slight second, tries to step up and block out the ball rather than drop back(it is better shown in the video than screencap). It allows Agudelo to make a perfect touch in on goal. 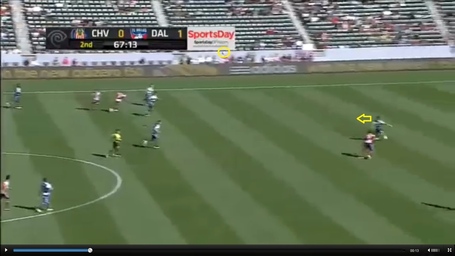 As mentioned, a huge amount of credit goes to Agudelo whose first touch is absolutely perfect. While Hedges did pull himself a bit out of position, he still would've been in a fine spot to clear the ball had Agudelo not taken it down so well...almost Ferreira-esque 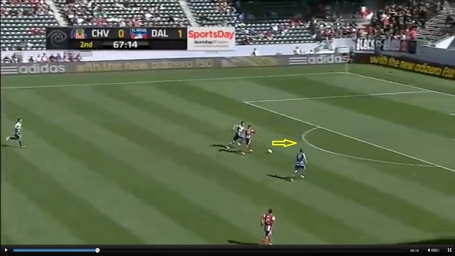 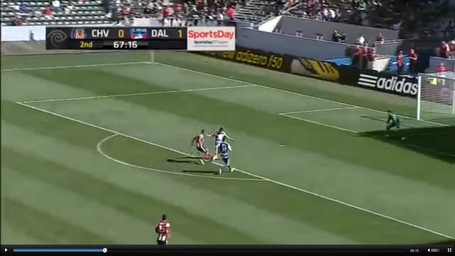 Lessons learned from the goal:

-Runs off the ball from the second forward may not mean much, but that run from Bowen, which doesn't show up in any stat, played a big part in splitting the center backs up. It's the kind of partnership that Kenny Cooper and Blas Perez/Eric Hassli need to develop.

-Juan Agudelo is good. That was an incredible goal from a 20 year old. Take nothing away, while there were things FCD could've done, Chivas USA had better chances than that to score that weren't converted on Sunday.

-Hedges will want to have that one back.