Kenny Cooper's back and Eric Hassli is in....now what?

Share All sharing options for: Rehashing A Huge Monday for FC Dallas

There's no doubt about it, Monday was an absolutely enormous day for FC Dallas. A day that was really two years in the making, finally getting depth at the forward position that hasn't been here for quite a long team. FC Dallas acquired Eric Hassli from Toronto FC for a conditional draft pick (either a 1st or 2nd rounder) and then surprised everyone (at least for the timing of it all) by sending $200,000 of their new-found allocation money to New York for Kenny Cooper. It was an extremely audacious move and one that rightly has everyone in Dallas ready for March 2.

Here's my thoughts on the moves and what they mean for the club:

Kenny Cooper Returning To Dallas Say what you want about whether he will fit with Blas and if he's worth the near-DP salary he now earns (the answer is yes), but if nothing else, it's just really really cool to have Kenny Cooper back in Dallas. There hasn't been a lot of positive things for FCD fans to hang their hats on in the last 12 months and Kenny Cooper returning is hopefully the start of that turning around.

Goals on Goals on Goals Cooper's 18 goals last year were one fewer than Blas Perez, Fabian Castillo and Jackson combined. Will that perfectly translate to FC Dallas? Probably not, but goals are goals and Kenny Cooper has a nearly six-season consistent goal scoring record without a huge history of injuries (except the freak leg break).

Why Hassli? While no one is questioning the decision to bring back Kenny Cooper, but plenty have asked me, if Cooper, why Hassli? If FCD wants to move to a 4-4-2 next year, you have to get another solid option up front and Hassli was too good to pass up. How many times are there moves around the league where you wonder "he was cheap, why didn't FCD make a run at him?" Blas Perez, even if he's healthy the whole year, is going to miss 10 games with suspension/Panama so getting another option made a ton of sense.

Formation Change It's extremely clear that FC Dallas is moving to the 4-4-2 diamond with David Ferreira as the attacking mid and Andrew Jacobson as the defensive midfielder. It's a move that Schellas has been wanting to do for a long time and while there may be some kinks to work out early in the season, I think it's something that will benefit things long term.

Wide Midfield Roles Something that's really interesting about this move to me is that it really changes the roles of Jackson and Fabian Castillo, I'm not sure in a good way either. Jackson and Castillo are really goal-scoring wingers rather than guys who are going to sit outside and whip crosses in. I'm going to be very interested to see how their games evolve and I think you could see Dallas attack through the middle of the field much more than in the past.

The Holes Left This roster still isn't quite complete yet. If you can add Nunez as a backup for Ferreira and either Hollingshead or an international winger to provide depth, however, I think this roster is about as complete of an MLS roster as you can make with lots of young talent to push the proven veterans. 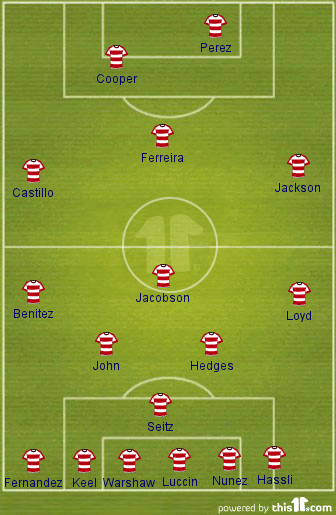 If that's your first-choice starting XI....that's really salty and an MLS Cup contender. Is it March 2 yet?