The Story of an MLS Convert

The MLS season is about to start, and you might wonder how some MLS haters become MLS lovers. This is one such story.

Share All sharing options for: The Story of an MLS Convert

"MLS? Bah! Who cares about that Mickey Mouse league? It's probably full of Americans anyway, and they're no good at soccer. It's ugly to watch, the team names are dumb and it's too hot to stay outside in Dallas."

"USA Soccer is No Good!"

Why would I have had a problem with MLS?

Think about it: when you go online, you will find no shortage of screaming, anti-American hate, and a lot of it is centered on the perception that the US think it's "all that".

"Well!" says an irate, foreign soccer fan, "they might think themselves the world police, but they're rubbish at football! One of our boys can take on 10 of theirs!"

"Well!" says an irate, foreign soccer fan, "they might think themselves the world police, but they're rubbish at football! One of our boys can take on 10 of theirs!" -MLS Hater

"There's no way any MLS team could take on my Barcelona SC (Ecuador)", I thought! No way at all.

World politics have a massive impact on the negativity or positivity surrounding MLS, and while a discussion on the USA's international reputation is more geared towards a political website, it has a very real effect on the way foreign fans (like I was) see the league. Foreigners that resent the US (there are many who don't, btw) take comfort in the usually misguided notion that MLS is significantly inferior to whatever their domestic league happens to be. Fans who love the USA tend to be much more optimistic about MLS' long term prognosis.

My opinion was more soccer-elitist than anti-America (I love the USA), but I still held firm to it.

Around February 2010, my wife had enlisted in the Army. Having served myself, I knew that the person left behind would need to find something with which to occupy all of the newfound free time. With the World Cup merely 6 months away, I decided in January 2010 to make an effort to try and understand MLS and, in particular, FC Dallas. I imagined there must be something valuable because it was still soccer, and soccer is almost always fun. After all, even games between sloppy teams are far more fun than boring stalemates by the best in the world.

I thought: "Alfredo, maybe you're being a douche about this. Americans are pretty much excellent at anything they put their minds to, and if you love soccer as much as you say you do, maybe you should help spread soccer in the USA by following MLS."

I have to say that my initial impression was quite bad.

The first game I watched online was a soporific bore-fest between DC United and Kansas City, and it was so terrible I turned the stream off at half-time. Since DC wasn't a team I cared about, I decided I hadn't seen enough, and so I watched a few FCD games on TV. I saw them beat Houston (Ugo!), and some time later I bought tickets for my friends and I to go watch Brek Shea be invisible (also a poor first impression) against DC United in a 1-0 home victory with a winner by Jeff Cunningham.

We all know how great that 2010 season turned out, and it helped fuel a large part of my love for MLS. After that first game, I bought tickets to every remaining home game, and got my friends into it. I watched all teams with equal interest and became fascinated by all the silly rules and regulations that govern MLS transfers and trades. I became engaged in heated twitter fights against pro-relegation supporters, went to most pre-season games, and tried to watch every match that I could get my hands on. 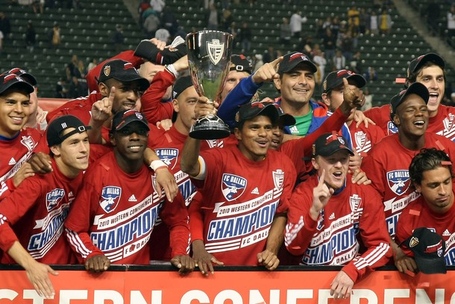 MLS Digital made it very easy to follow the league. Do not underestimate the value of a league willing to try all sorts of new ideas. They produced weekly webshows, aired podcasts, wrote their own opinion pieces and made all their videos available for free. Their streaming service was dirt cheap and their Direct Kick package was too. There was never any shortage in my quest for MLS knowledge.

I also experienced things in MLS that I never had anywhere else: I went to a practice (They were open to the public??) and asked Schellas some silly question and, can you believe it, he took the time to gie me a few minutes worth answers! Shea nodded to me in the stands when he saw me melting away on a hot June morning. I heard Jair and Ferreira joking about missing shots with Chavez during a practice, and it was clear they liked each other.

Those small moments had a very big impact.

This is something you cannot expect the average outside fan to do, to really immerse themselves, but it was an eye-opening experience. MLS is a league that has a very organic, accepting and welcoming atmosphere that is unique in the world. Every soccer supporter, even now, feels like they are part of a secret club. We all give a knowing nod when we see a Columbus Crew jersey at the mall, mock the Seattle-wearing bandwagoners in every town not named Seattle, and greet each other with enthusiasm when we find a fellow soccer fan at a bar.

There's a reason supporters are segregated in foreign matches, and it isn't because they get along. Riots, being urinated on, and having a coke/beer bottles thrown at people's heads are all things that happens in other countries, and more than a few of those happened to me.

I love going to a stadium and talking up opposition fans without coming to blows. I love going to forums and talking soccer with only a modest amount of flaming. I love having beautiful parks to play in, supporting a league that really, visibly cares about its fans, and having enough controversy to allow people like us to fill boards with walls of text and vitriol.

You can't get that kind of feel anywhere else, and I've lived in lots of places.

MLS kicks ass, and it will only get better. People would see that if, like me, they just gave it a chance.