MLS Jersey week has begun its assault, with some teams (Seattle) clearly turning out better than others (Houston). Meanwhile, in California, Chris Wondolowski has signed a new DP deal to keep him with the Quakes.

A few days is all that separates us from another season of MLS glory. Jerseys are being unveiled, players are being re-signed, and trash-talk is slowly moving out of preseason form. I have already devised 37 new insults for teams not named FC Dallas.

Chris Wondolowski has signed a brand new, DP-level contract with the San Jose Earthquakes. His deal, worth about $600,000, is a princely reward for the gaggle of goals he has scored for the Quakes, with the hope that he will continue to score. How much of his production is due to the opposition he faces in MLS, and how much of it is raw, unadultered talent?

Wondo has failed to impress during his short stints with the USMNT, but that could be chalked up to simply not jelling with his fellow Nats. After all, Wondo is a player that requires a more dynamic offense than the USMNT seems capable of, and if they can't get him the ball regularly or spend some time in the opposition's area, his impact will be limited. Regardless, it's nice to see San Jose get their star player locked up for a while, as MLS teams hopefully continue the trend of keeping as many stars as is financially possible.

Jersey week has begun and some of the newer kits being unveiled are (what's the polite word?) interesting. Yes, they are interesting. Yesterday, Mr. Steve Fenn linked to the Colorado Rapids' new third kits on twitter, and my initial reaction was one of abject horror. While I understand clothing lines, kits, shorts and all related items are subject to taste, I hereby declare the Rapids' new shirts as misguided. My initial reaction has faded somewhat, and I can see that they are trying to do right by the State of Colorado by incorporating the flag into their design, but you could have gone a hundred different ways with it instead of what they chose. The red trim on blue doesn't look too great, and not particularly pleasing (to me at least). The crest might be the worst part. I have always liked the Rapids' crest, with its snowky peak and soccer ball, and coloring it all red is a bucketful of yuck.

Their new home kits are nothing to write home about either, and they look very similar in layout to some of the older FCD kits. However, they have one incredible feature on them. See the dark hoops that offset the slightly lighter burgundy? Those are the names of the season ticket holders. Holy. Cow. That's sweet (and also tight). It's a GREAT way to reward fans. While I can't say much for the design of the shirt overall, that feature alone would be worth buying them for Rapids faithful.

Houston, on the other hand, have decided to wear training tops for the entire season. The Dynamo's kits the past two years have been creative and eye-catching, so it's a shame that their shirts look like a whiteboard for an elementary-level geometry class. White triangles is the order of the day here, much like it was during my time as a preschool teacher. Did someone at Adidas drop the ball and forget to do the jerseys until the last minute? Does someone at Adidas secretly hate Houston? This new design is the zenith of drab, and it boggles the mind to consider that someone must have approved these. 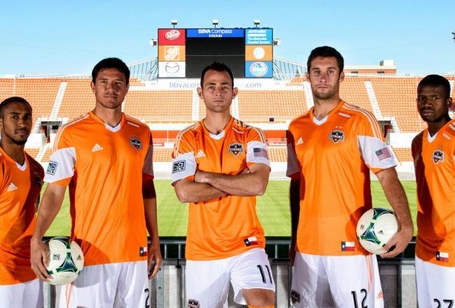 That's the only reason that could explain such a blasé approach to kit design. At least Colorado tried something and put a lot of thought into it. The Dynamo are spitting out some basic template from the FIFA Team Creator and trying to charge $79 for it.

Let us not forget though, that boring is better than ugly (remember that Stars' horriffic Mooterus sweater?), so Houston could always have had it worse.

The best jerseys so far, by my reckoning, are Toronto and Seattle. Stylish and sexy! if I was a girl jersey, I'd be all over those jerseys at whatever pub it is shirts hang out in after a tough game.

Torsten Frings, the oft-injured Harbinger of American Woe and the one-time Savior of Toronto, has decided to call it quits. He will be announcing his retirement later today. This clears the path for him to live his dream and join the German handball team, which sets up a potential future matchup against another famous European handballer, Thierry Henry. The 2016 Olympic Handball event could be a supercharged, Euro-tilted affair, with Germany and France vying for handballing supremacy.

WC2002 still stings like hell, in case you can't tell.

MLS has redesigned their website rather dramatically, and I don't yet know if I'm a huge fan of the changes. I do very much approve of the new "Most Commented" section on their site, but I find it a tick harder to find articles with the smaller section they're given. My personal preferences aside, MLS Digital deserves tons of praise for constantly testing new things and trying their best to please fans, which isn't something other leagues are big on (I'm looking at you NHL, your website is a mess).

I still believe that the NFL and SB Nation are the gold standard as far as home page layouts go, but MLS works hard on their site and isn't afraid to swing and miss. More leagues should hold to that sort of philosophy, instead of always picking the safe (and boring) option.

So, have you heard about the Sunshine State? Orlando in MLS seems to be a real possibility according to the Orlando Sentinel, though how much of that is local chest-puffing/optimism and how much is true remains up for debate. I have to admit that I'm a huge Disney buff, so I'd hope for a Disney sponsored team. Something similar to the Sounders with their Xbox shirts. MLS could really use a presence in Florida and if Miami isn't going to work out, then Orlando is their best bet. There are galleons full of money in the area, lots of families willing to pay and no small amount of corporate interests.

Grant Wahl has released part 1 of a multi-player, confidential poll. In this poll he asked all sorts of questions, but what matters to us is where Dallas is mentioned, and it's not pretty. Dallas came out as the place with the worst atmosphere (ouch!) and they came in second in the "team players wouldn't want to play for" category. Also, they "won" the "coach you don't want to play under" category. Now, he asked 18 players, so that's hardly a large enough sample but... yikes.

I find it really hard to believe Dallas has a worse atmosphere than New England, Colorado or Chivas (whose home games resemble funerals rather than fun events), or that it's a team people wouldn't want to play for. I guess that ties into the coach though, as far as team desirability goes. It makes you wonder who Grant Wahl asked these questions of, and if it was one of the players Hyndman angered / dumped (though it was a lot of Gorman's work, that) or one of their close friends. Either way, it's quite disheartening to see our team portrayed in such a negative light.

2) Why is Wondolowski so successful at the MLS level and invisible with the National Team? My money is on the style of offense that SJ plays, which is more tailored to his style.

3) How do you feel about your fantasy team? Do you copy other people's lineups from time to time, or do you trust your gut?

4) Dallas is just terrible in the poll. Do you agree with the results from Grant Wahl's poll?