Is David Ferreira On The Wings A Permanent Move?

After last night's 1-0 win over the Portland Timbers, a move to the wings could be in former MLS MVP David Ferreira's future.

Share All sharing options for: Is David Ferreira On The Wings A Permanent Move?

The talk all preseason long has been of the new formation that FC Dallas expects to use in 2013. FC Dallas manager Schellas Hyndman has always been a 4-4-2 kind of guy but has never really had the players in Frisco to really use that formation to it's best ability.

That was until this offseason when the club brought back Kenny Cooper and added Eric Hassli. Now we haven't seen a ton of the French striker but we have had a good dosage of what Cooper and Blas Perez can do together.

We talked about doing a bunch of things differently and it all looked good on the white board. But once it gets out on the field with all these moving parts, it doesn’t always end up the same. -Schellas Hyndman

The next big question came after the AIK game last weekend. Former MLS MVP David Ferreira sat atop a diamond midfield to start the game but as the match wore on it was apparent that there wasn't enough possession feeding the attack and that Ferreira was getting stretched in a manner that didn't suit his game.

So what does Hyndman do to fix that? Last night he did something we have yet to see in moving the Colombian out to the wing while adding some bulk to the center of the field with Andrew Jacobson and Bobby Warshaw. The move in the end worked out nicely for FC Dallas in the first half when the starters were all on the field. Dallas controlled the possession and the chances for Perez and Cooper started to come in.

Against AIK on Sunday, the club was giving up a ton of possession in the middle of the park. More importantly the 50-50 balls were just not going their way. This will happen from time to time but a small tweak in the formation like what we saw last night can go a long way in correcting the lack of ball winning in the midfield. 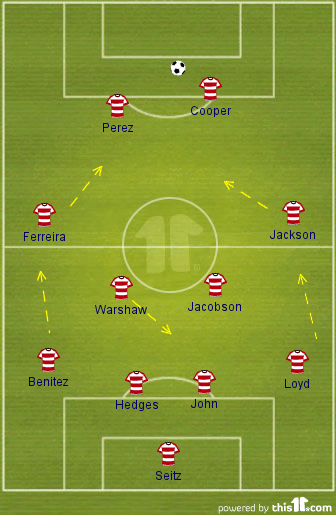 Being on the wing still allowed Ferreira to be the offensive creator for FC Dallas. I viewed last night's 45 minutes as a test to see if Ferreira could be FC Dallas' Brad Davis, something Hyndman has said he has been searching for now for some time. Davis plays more on the wing for Houston in their set up as does Seattle playmaker Mauro Rosales.

Both do better from a wide position as it allows their club to have ball winners in the middle like Jacobson or Warshaw. It also allows a guy like Jackson to do his best work from wing as well.

I imagine it will take me a little bit to get to 100 percent at that position but it shouldn’t be too much of a transition. -David Ferreira

Just as Hyndman mentioned last night after the game, Dallas was aggressive through the middle with Warshaw and Jacobson. They were winning balls and giving Jackson and Ferreira a chance to do their best work in the attack. It also kept some pressure off the defense as well, as Portland didn't seem to get their best chances until the second half.

We also got to see how Je-Vaughn Watson would be in this set up as well in the second half. With all the younger players, he was able to be a calming force in the middle that kept things going for Dallas.

Obviously the sample was pretty small. It is tough to gage 45 minutes in a preseason match as to if this is where Hyndman and the club are going. But based on how the team talked afterward, it may not be out of the question that we'll see this type of formation more and more this season.

Saturday's game against San Jose will tell us the true story, as it will be the final preseason test before Colorado comes to town the following weekend.

What did you all make of Ferreira on the wing in the first half? Is this a formation you can live with?