Looking at defensive midfield and the options available to FC Dallas

I've had a few ideas kicking around in my head over the past few days and while people are worrying about wing depth, it's starting to become pretty clear that defensive midfield is possibly the most pressing question on the FCD roster. That's not to say that Andrew Jacobson isn't a very high quality player that has a major role to play on FC Dallas, but the question is can he play the new defensive midfield role for Schellas Hyndman in the diamond 4-4-2.

Richard Farley has a fantastic article today on Pro Soccer Talk looking at the FC Dallas formation and while it brings up a number of good discussion points, I'm going to focus on the defensive midfield today and one sentence in particular from Farley's piece.

Why Benítez was forced into the passes was more important than how the passes were executed. Trialist Michel, starting in defensive midfield, was often marked by right forward Viktor Lundberg and was unable to create an outlet through the middle.

An outlet through the middle. That's what the d-mid spot in the diamond formation has to be. But he also has to be someone who can win balls through the midfield, tackle balls off attackers, clog up passing lanes and basically be everywhere at all times. It's an impossible task, but one that a few dynamic players around the league execute to perfection. Players like Kyle Beckerman, Osvaldo Alonso and, until recently, David Beckham.

Andrew Jacobson's job for FCD in the past two years that he has done very well is to win balls in the midfield and quickly get them to the dangermen. Quick, counterattack-sparking passes to players like David Ferreira, Fabian Castillo and Jackson. The defensive midfielder, on the other hand, needs to be an outlet that reads the game extremely well spotting problems before they happen(like Farley mentions with Benitez), while being good in tight spaces and allowing the midfield to get forward while holding up the ball without turning it over.

Schellas Hyndman brought in Peter Luccin to play the role, something he did in La Liga and Ligue One for many years. He has possible suffered a major injury forcing Hyndman to bring in Senegalese midfielder Mickael Tavares, though he has now since been released as well.

Can Jacobson be that guy for FCD? He's certainly going to get the chance to prove he can and it will probably happen over the next two games in Portland. Let's look at a few scenarios of what could happen with the defensive mid position

1. Andrew Jacobson is given an extended shot This is probably the most likely scenario given that there's less than two weeks until the start of the season. Is Jacobson perfectly suited to play as the d-mid anchor in a diamond 4-4-2? Probably not, but he has the technical skill, fitness and passing ability to play the position, the question is whether his range is sufficient and whether he can slow some of the most crafty players in the league.

2. Peter Luccin's injury is not as serious as once thought The fact that Luccin hasn't been seen since week two of the preseason seems to suggest this is not a very likely option, but if his prognosis is a 6-8 week thing then scrapping the Frenchman seems to be an overreaction.

3. Someone else steps up Could a guy like Bobby Warshaw step into the role? I actually think that Warshaw's style of play is perhaps better suited to the role than Jacobsons, but we've seen nothing to suggest that Hyndman has much trust in Warshaw at this point. Schellas has stated earlier in preseason that Michel(not to be confused with Mickael) could have the skill set to play a defensive midfield role so perhaps he stumbles on something there.

4. An unknown comes in Fernando Clavijo was just in Brazil conducting business so perhaps there is a signing in the works to come in and take the spot.

5. A past hero returns What FC Dallas needs from the defensive midfield position is a heat map like this one. 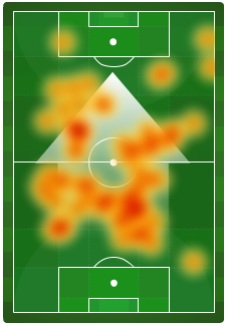 Who had that heat map you ask? One Julian de Guzman. The Canadian is playing for a 2. Bundesliga side at the moment, but Regensberg are currently seven points from safety and should they go down to the third division, there is no chance De Guzman would say. Julian is perfectly suited for the defensive midfield position as he covers a ton of ground, is one of the best players I've ever seen at keeping the ball in tight spaces.

Going back to earlier in the post, I pointed out the most important part being "an outlet through the middle. Time after time in De Guzman's games with FCD I can remember him sprinting over to an area of bother and providing his teammate with a clear passing outlet. Give Jacobson until mid-June to prove he can handle the position and if things aren't working out give de Guzman a call? Seems smart to me.

6. Scrap the Formation Schellas has said repeatedly over the past two weeks that when you put as much of your salary cap into three players like Dallas is doing with Kenny Cooper, Blas Perez and Eric Hassli, you find a way to get two of them on the field..and you're not sitting David Ferreira. Hmm this gives me an idea for another post...