With the apparent shift to a 4-4-2 formation, Schellas Hyndman is using the final weeks of the preseason to determine what exactly that middle four will look like.

Share All sharing options for: Not all 4-4-2s Are Created Equal

After the 0-0 draw with Swedish club AIK on Sunday, Schellas Hyndman made a comment to reporters that stood out to me. It was a snarky little comment in a way and in all reality it holds little weight in the grand scheme of things. Hyndman said "its why we call it preseason." Simple. Effective. And to the point.

I bring this up because the 0-0 draw showed what appears to be as close to a starting XI as we've seen so far this preseason from FC Dallas. The back four looked decent at times, the front pairing of Blas Perez and Kenny Cooper looked like we'll see some solid goal scoring this season (yeah I know it was a 0-0 draw but signs where there).

Then there was the midfield.

Dallas had three of it's usual starters in Fabian Castillo, Jackson and David Ferreira. Behind them in the formation was someone new in Mickael Tavares. Andrew Jacobson came on for him in the middle part of the second half.

Right now as it stands the midfield and offense need work. I won't get into the what the strikers bring to the table as we know that Cooper, Perez and Eric Hassli were all brought in to score goals and keep things flowing on that end.

Given how this team will be a two-striker team this season, some work in the midfield must be done to allow that two-striker system to be as effective as it possibly can be.

Diamond in the rough

Naturally going to a diamond midfield is what a lot of folks would like to see happen here. It makes the most sense when you have a player like a Ferreira leading the charge at the top of the diamond. What it also means is the defensive midfielder or holding midfielder behind him has to do a ton of the leg work.

With guys like Castillo and Jackson running the flanks, the offense will certainly thrive in this set up. Both get up the wings nicely and each are good enough on the ball to help create chances for Hassli, Cooper and Perez.

That leaves a guy like Jacobson or even if injuries go away Peter Luccin. Hell, I could see Bobby Warshaw doing well in this role if it came to it. The thing is this position is all about covering a lot of ground and doing a ton of grunt work. Something the club had in Julian de Guzman late last year.

The more I look at a diamond shaped midfield, the more I don't see it happening just yet for this club. Just with any formation there will be some give and take, this one may take just a little too much out of Ferreira in the end and put too much on guys like Castillo and Jacobson. Not to mention with the current lack of depth on the wings, it sets the club up for some disaster should Castillo or Jackson go down at some point with an injury.

The next option all depends on the health of Luccin or the emergence of Warshaw. Going to what is in some ways a 4-4-2 but in all reality it is truly a 4-3-1-2. I could even argue that this is closer to a 4-3-3 more than anything else.

In this system, as you'll see in the graphic, the triangle behind Ferreira is key to the midfield success. Jacobson and Jackson aren't quite wingers and you give up having a player that doesn't track back as much in Castillo for the addition of more defensive help in Luccin/Warshaw. 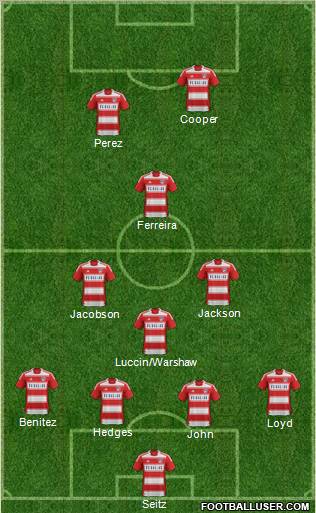 This formation would provide some good space for a guy like Jackson who loves to cover as much ground as he possibly can (sometimes a good thing, sometimes a very bad thing). It would also provide more flank play out of the back as Jair Benitez and Zach Loyd would be required to push forward just a tad more than they normally do.

Richard Farley provided this excellent look at what Hyndman may be doing with this formation. He believes this is the direction that Hyndman is taking this club.

Farley brings up excellent points about this formation as it gives Ferreira a little more freedom to be himself and more importantly it doesn't ask him to do something that he possibly may not be able to do.

I look at Real Salt Lake for an example of how to do this right. Over the last couple of seasons they have used a diamond midfield with a two striker set up.

When Javier Morales has been healthy he has been the engine that has driven the midfield and attack for RSL. He sets up Alvaro Saborio and others in the attack. His play also allows for quality flank play as well.

But what has really worked for RSL over the years is the man behind Morales - Kyle Beckerman. Love him, hate him or whatever, Beckerman has been the perfect compliment to Morales in this set up. He does the grunt work that Morales isn't capable of doing, very similar to what we'll see out of Ferreira (come on folks, he isn't going to win a ton of headers now is he?).

Something else all together?

Any system you play, anywhere you play it, you’re bound to give up something. -Schellas Hyndman

Obviously the formation above gives up Castillo or in some cases Jackson in the line up. But what if the formation was more of a 4-3-1-2 with the flat line behind Ferreira being that of Castillo-Jacobson-Jackson? I'm not entirely sure that kind of formation could work well but you never know.

A flat three behind Ferreira would cover a ton of space just as the formation above would have to. It would also give Ferreira the ability to be himself in the attack.

On the flip side, it asks a lot of someone like Castillo, who may be too young to take on a task of having to be tracked back a bit more. Not to mention it takes a dangerous speedster potentially away from being solely on the wings. The more he or Jackson track out, the more chances that teams are able to gang up on Jacobson in the middle.

Either way, it doesn't sound too pretty to me.

Daniel did a fantastic job asking the big question of Jacobson earlier in the day. I see the midfield, particularly the defensive/holding midfielder as the keys to the team here. Someone who has the motor to run all day and do a ton of dirty work is what the club needs.

To me, I'm inclined to agree with Farley on his assessment of where Dallas is headed with this formation. Dallas made their bed when they added Hassli and Cooper this offseason. Adding that kind of offense and salary cap was a call for a drastic change to how the formation would be done this year. We all knew it. It may still be early in the process but the more I look at it the more I want stability behind Ferreira. Dallas needs Ferreira to be his MVP-self. It is as simple as that in my mind.

What say you? Which 4-4-2 is right for this club? Or is there a formation out there that needs to be brought into the equation?