What do the career stats of FC Dallas' three strikers say about their ability to score?

Now that FC Dallas has acquired Eric Hassli and Kenny Cooper, what should we expect out of the suddenly-deep strike force in Frisco? Some like to simply point to the numbers of goals Cooper, Hasli, and Blas Perez scored last season (18, 5, and 9, respectively).

But when you look at the career of nearly any striker, and particularly these three, you'll see that one season's goal total isn't a very good predictor of the next year's tally. However, the career stats (provided as usual by Aaron Nielson of @ENBSports) for FC Dallas 3 big forwards are instructive, especially when looking at their annual statistics in terms of per 90 minute averages.

Below are Perez, Hassli, and Cooper's average 90 minutes from every season since 2005-2006 in terms of goals, shots on goal, and assists (though it needs to be noted that Blas played a few seasons in leagues that even Aaron can't find stats for). When one of them played for two clubs during a campaign, those 2 sets of statistics were added before converting to a per-90 figure. The size of each darker circle within each line is driven by total minutes played.

You'll notice that while goals and assists vary wildly year-to-year, shots on goal are relatively steady. Blas is generally between 1.1 and 1.5 per 90, Kenny 1.3 and 1.75, and Eric 0.95 to 1.3. Meanwhile their goals and assists per 90 are feast or famine, with "disappointing" campaigns sandwiched between "great" ones.

Good forwards always seem to be capable of getting a few strikes on frame, but scoring is much more subject to the whims of lucky bounces, the quality of chances served to them, and the strength of the opposing keeper.

While all three pretty steadily get a shot on goal in their average match, Hassli's general level seems to be lower than the others (while still quite good). He may also be showing signs of aging, with his total in Vancouver and Toronto below his usual standard. Then again, maybe he just couldn't overcome the problems surrounding him on those teams. More concerning, Hassli's average season is only 1383 minutes. He just doesn't tend to play nearly as often as you'd expect from someone with his scoring record.

Cooper's worst year for SOG was 2011 in Portland, but like Hassli's time up North, one has to wonder if that was the fault of Kenny or the system he was stuck in. The big Texan seems a bit of a volume shooter, which can be good and bad. Sure, his per-shot accuracy isn't elite, but there's something to be said for earning so many shots in the first place.

The career stats for the FCD strikers also designate how many goals were in and out of the box, whether they were headers, and how many were set pieces. All of these figures are graphed below on per 90 minute terms, along with assist totals: 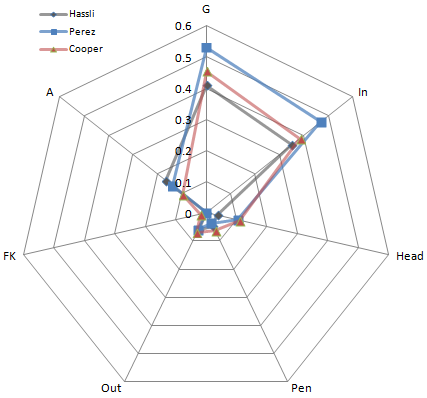 Highlights from this data:

- Like most strikers, all three have scored far more inside the penalty area, though all three have averaged a long range strike every 14 or 17 matches.

- Cooper and Perez have been far more effective heading the ball.

- So small you may not catch it above: Hassli and Perez aren't credited with scoring from any free kicks, but Cooper has done so 3 times in his career.

Ungraphed, but of note: Hassli gets a reputation for rough play, but his yellow and red card history is essentially identical to that of Blas Perez. If you don't count Hassli's 2nd yellow for his dumb shirt-removal incident, he averages a red every 28.2 matches, and Blas 27.6 matches. They both get a yellow around every third game. Cooper, meanwhile, has never seen red, and averages a yellow every 12 matches.

As stated earlier, none of this has terribly accurate predictive power for 2013. There are just too many random factors driving individual goal tallies. However, if FC Dallas can provide useful service to their big men up top, it would be disappointing if they don't collectively double 2012 FCD forwards' 13 goals.