FM14 offers more of the same, but when the template is so excellent, that's not a bad thing.

Early last week, the kind folks at Sega sent me review code for the latest iteration of their popular manager sim, Football Manager 14. After spending a nice chunk of time with it, as I did with 13, my opinion is about the same as it was for FM13.

In other words, this is still an excellent game that you should consider buying if you consider yourself a "hardcore" soccer fanatic.

Into The Deep End

First things first: this game is not for the faint of heart. This is a management sim first and foremost. You cannot in any way directly control the team you're managing, so playing the matches as you would in the PES or FIFA series is out of the question.

You will instead manage every single conceivable aspect of the team's training and preparation. You can select their training regimen, their instructions per position, such as instructing a defender to push forward more (or less) often. You can set individual formations, positioning players exactly where you want them on the pitch, or you can have your assistants handle that for you.

I would explain the features in detail, but it would take a giant book's worth of explaining. Succinctly put, you can handle only the basics of formations and tactics, or micromanage down to the individual training regimens and workout intensity of your youth reserves, player by player. There are so many options it's positively dizzying, but if you've ever wanted complete and utter control of your favorite club, this is the game to get.

It's important to note that this game is entirely menu-driven. There are menus, and those menus have sub-menus, and those sub-menus have drop-down boxes with individual settings that can also be customized in another menu elsewhere. If you spend a lot of your time in databases, accounting software, or are familiar with menu-driven games, this sort of interface won't faze you. However, if you're used primarily to FIFA, Football Manager's interface will take some getting used to.

Luckily, if you don't want to fuss much with micromanaging, there's a new mode that allows for a career to be played while focusing exclusively on matchday. That way, you can ply your tactical prowess without worrying about setting up preseason friendlies with Kettering Town or the Orlando Pirates, or deciding which U17 player to sign to a full contract. 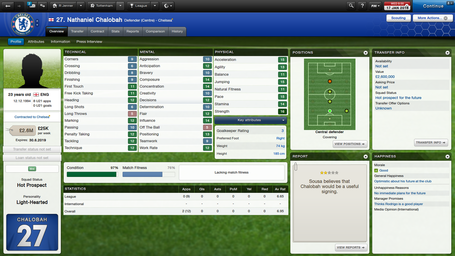 On matchday, FM14's features have it so that you, the manager, can make a tangible difference in the way your team adapts on the pitch. You can change tactics quickly, easily, and have instant changes. The tactical options are self-explanatory (such as "retain possession" or "shoot on sight") and simply activated by clicking the appropriate button. You can order your team, down to individual players, to play a specific way. As an example, if you want your left and right wingers to periodically switch positions with each other to throw off defenders, that's entirely possible, and you can have them play that way for as little as five minutes, or as much as the entire match.

Your pre-saved tactics (there's a WHOLE system in the game devoted entirely to custom tactics) can be accessed and activated on the fly, and your team will obey your orders accordingly. Need an aggressive effort from your fullbacks in order to get more balls in the box? Tick the box with the option, and you'll soon see Ashley Cole (or Leighton Baines, or Zach Loyd, or whoever) pushing almost suicidally forward and lobbing crosses, hoping that someone will get on the end of them.

If you're a fan of previous FM games, this game will feel much the same. You might have to redownload club logos (as FM doesn't come with almost any official logos or uniforms to speak of, though team names and players are all correctly labeled and rated) to get a more authentic feel, but that's about the only change.

The interface has a MUCH friendlier setup for those with higher resolution screens. No longer will you have to squint desperately, or dig into system files to manually tweak the font size so that it's readable by human eyes. The tiny, tiny lettering has been enlarged dramatically, so thank the soccer gods for that.

The matchday graphics have been cleaned up, the but animations are still as jerky as you remember. A few of the awkward "start and then magically stop running" animations are still around, but they've tightened up the momentum players run with on the pitch. It still feels like you're watching toys play soccer through the power of magic, but at least it feels less jerky.

Finally, the most welcome change is the option to apply advice directly from the dialog box that shows the coach's suggestions. Marco Ferruzzi think perhaps George John should start passing out of the back more? Before, you'd have to manually set that option to see the results. Now, there is a a handy "Apply Advice" button and the system applies the recommendations immediately.

I wish I could go into more detail, but frankly there are so many options and things to explain that the House of Windsor could fall and I would still be sitting here trying to explain it to you.

If you're a rabid soccer fan, this game will provide you with practically limitless options. There's a learning curve to it and it's a bit intimidating, but it's easy to get sucked into hours upon hours of taking Dunstable Town all the way to Premiership.

If you have any questions, feel free to ask them in the thread. I (or other FM fans) will answer them as best I can.