Hernandez Making the Most of his Chance in Central America

Share All sharing options for: Hernandez Making the Most of his Chance in Central America

As a young player, you need games and minutes. Moments to enjoy some glory as well as those times where you make mistakes and learn from them. Practices offer plenty of learning experiences, but there is no substitute for game action.

Moises Hernandez wasn't getting first-team minutes for FC Dallas. The rare left back by trade, Hernandez was stuck behind stalwart left back Jair Benitez, as well as backup Carlos Rodriguez, without another position on the field where he could really pitch in. Lacking any minutes on the horizon, Fernando Clavijo found him a way out and a chance to return to his roots.

DFW-born with a Guatemalan father, Hernandez was offered a loan spell with Guatemala City giants Comunicaciones. It meant leaving the comfort of home behind and going on a new adventure, a big step for a 20-year-old, but Hernandez accepted the move with open arms.

"Everyone thought that Moises was a guy we have to find a way to get him games because he has what it takes and if we get him games he’s only going to get better," Clavijo said about Hernandez. "He took the chance and I give a lot of credit to him."

"I’m the one who’s looking for teams for him and trying to sell what he can do, but at the same time he took the chance because that chance was presented to other players and they didn’t take it. He took it, it’s paying off for him."

As everyone enters their early-20's, they are forced to take a few leaps of faith and the one that Hernandez took has majorly paid off for the young American. Saddled by some lingering paperwork issues, Moises was prevented from making his first-team debut for quite some time but finally, right before the playoffs, Hernandez finally made a professional first-division start. But it didn't end there.

Comunicaciones, known as Los Cremas, went on to win their 25th league championship, a moment that had to rank at the top of Hernandez' budding career. 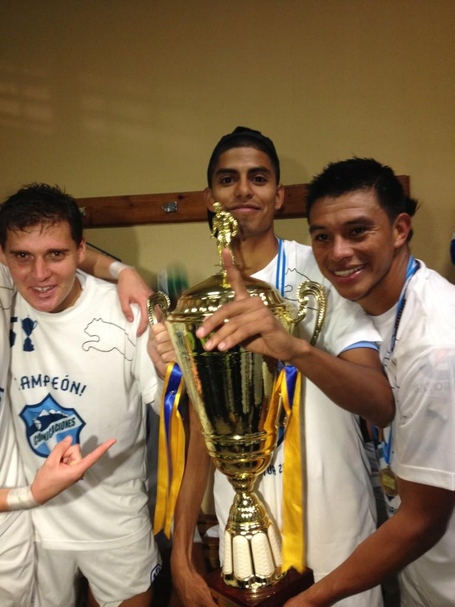 A move back to FC Dallas in the 2013 pre-season seemed likely until former Comunicaciones head coach Ronald Gonzalez, having earned a move to Costa Rican giants Saprissa, gave Clavijo a call. Gonzalez wanted Hernandez back, and this time in a bigger role.

"This is somebody who sacrificed some of the luxury of being in Dallas at the beautiful fields and everything else to go to Guatemala and win a championship," said Clavijo. "Now he’s being requested for the team to be a big and important piece of Saprissa’s team in the 2013 season."

Hernandez has joined Saprissa for the 2013 spring campaign with even more first-team minutes looking likely.

Whether or not Hernandez ever carves out a successful career with FC Dallas, the youngster who soon turns 21 in March is a budding young player in central America with a full career as a professional looking more and more likely.

And it was all because he took a chance that others wouldn't.

"This is great and I think the idea of loaning some of these younger players to get minutes is paying off," said Clavijo. "Hopefully we can do it for more and more players to hopefully get opportunities to get young players minutes."