Clavijo states that he is not interested in the coaching job.

Share All sharing options for: Fernando Clavijo On The FC Dallas Coaching Search

In a end of season media conference call today, FC Dallas technical director Fernando Clavijo put to rest any rumors that he had any interest in the open coaching vacancy with the club. Clavijo stated that he had one job to do and that he did not come to North Texas to be a head coach.

The Clavijo Side Of Things 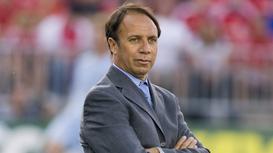 There are some lingering questions to be asked about Fernando Clavijo. Just how good of a job has he done in two years with FC Dallas?

"I'm very happy with my role right now," said Clavijo. "Like I told someone, I came here not to be a head coach. I came here to help the head coach put together a team and help the franchise. So I'm not interested what-so-ever in the job."

Clavijo also gave the reporters on the call a time frame for when a new coach could be announced as well, stating that the team would like to get things done within the month of November if all possible. December 1st is the due date for the club to re-sign players with options and Clavijo is hoping that the new coach will be involved in those contract talks.

"No decision has been made yet [on re-signing any players]," explained Clavijo. "And the reason is we are still searching for a head coach. We would like to give the coach the opportunity to be apart of the process. The main reason is we have until December 1st to exercise [the player's options] or not. We are going to take our time with that.

"We have about three weeks to interview coaches and get one in place. If we are able to do that then great, but if we don't then we're going to have to make some decisions based on the team."

Clavijo stated that he would be apart of the coaching search with the leaders at the Hunts Sports Group.