What of FC Dallas' Playoff Chances?

Share All sharing options for: What of FC Dallas' Playoff Chances?

The door was wide open for FC Dallas...as I talked about after the three-game winning streak, FCD needed Vancouver to struggle on their three road games before coming to Frisco.

Vancouver lost all three of them. The door was left wide open. Unfortunately, Dallas could only manage a point from games against LA and Seattle leaving things pretty bleak. Here's the standings: 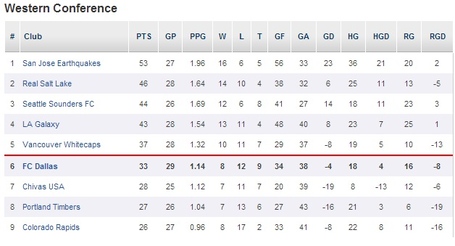 Obviously you can imagine how differently things would be if Dallas had 3-5 more points with Vancouver coming to town next week. I try to always stay a glass half-full kind of guy though, so let's just go ahead and assume FCD beats Vancouver in two weeks time. We all know it's a scenario that must happen if Dallas wants to have a chance. The scenario, in that case, would be:

Could Dallas win three of their last four in that scenario? They'd have at San Jose, at Chivas USA, At Seattle, vs Chivas USA. The Chivas USA games are very winnable, I think we can all agree on that.

FCD played very well at San Jose last time, but man the 'Quakes are firing on all cylinders right now. That would leave winning at Seattle as the task at hand. It's kind of far off so we'll worry about that if the season is even alive with two games to play...which I think we would all take.

Let's go crazy for a second and say Dallas wins four of the last five games and finishes on 45 points.

Now the story that is Vancouver:

To the Whitecaps (small) credit, those haven't been easy games, but the fact remains that Vancouver has been very, very poor in the past month. Will Vancouver keep the poor run going? After FC Dallas, they close the season with games vs Colorado, vs Seattle, vs Chivas USA, vs Portland and at RSL.

To beat a potential final tally of 45 points from FC Dallas, the Whitecaps would need to win three of those last five games. And they play Colorado, Portland and Chivas USA at home, teams with three combined wins in their last 15 games.

To summarize, FCD needs to beat Vancouver, win three of their last four including a signature road win over either San Jose or Seattle, and hope that the Whitecaps manage 8 points or less from their final five games.

Sports Club Stats MLS runs millions of scenarios and lists FCD's chances at 7.0% with the most likely scenario that Dallas makes the playoffs being a run of 3-1-1 over the last five games.

What do you think, is there a chance?