The Colorado Rapids came into BC Place on Sunday night with a 10-game road losing streak monkey on their back so when they held a 1-0 lead over Vancouver Whitecaps at halftime on Sunday night, FCD fans, coaches and players probably couldn't believe the luck. I know I couldn't.

Then the second half happened and a Vancouver team that had been pretty outplayed throughout the game produced ten minutes of quality that saw goals from Alain Rochat and Kenny Miller, putting the Whitecaps into a lead that would push their lead over FC Dallas back to a breathable four points.

But this Whitecaps team is not the same team we saw run through MLS in the first half of the year.

Jaime Smith scored an unlikely 86th minute equalizer to steal a point from Vancouver and basically steal two points from the Whitecaps for FC Dallas.

It really is getting kind of freaky now. Stoppage-time winners for FC Dallas in two of their last four games while the Whitecaps just gave up a lead at home to a team that had exactly 0 points from their last ten road games.

Playoff Standings after the jump 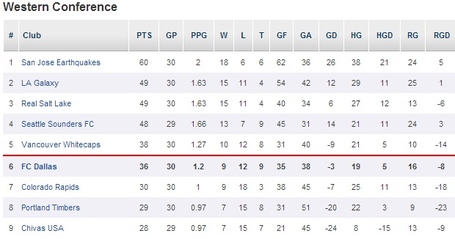 Two points and no more games in hand. That's all that separates the two squads.

FC Dallas has games at San Jose, Chivas USA, Seattle and then a game at home vs Chivas on the final day of the season. Vancouver has games vs Seattle, Portland, Chivas USA and at Real Salt Lake to end the year.

Vancouver plays before FC Dallas every weekend for the rest of the season, and their game vs Seattle on Saturday should end a bit before halftime in San Jose setting up what could be a very interesting halftime team talk.

Is FCD going to make the playoffs? It's probably about 70-30 Whitecaps right now, but a month ago it was 96-4 Whitecaps so we'll take it.

What do you think Dallas needs to do from here on out to make the playoffs?