Share All sharing options for: Taking Stock of the Western Conference Playoff Race

A month ago, Dallas sat eight points out of a playoff spot after beating Vancouver at BC Place. We analyzed the playoff chances and things were pretty spot on. Vancouver had to struggle in their road trip if Dallas wanted to have any chance at making the playoffs. That's exactly what happened as the Whitecaps went 0-4 on the road trip scoring exactly one goal. The goal was scored in the 96th minute and now Dallas is one point behind the Whitecaps. 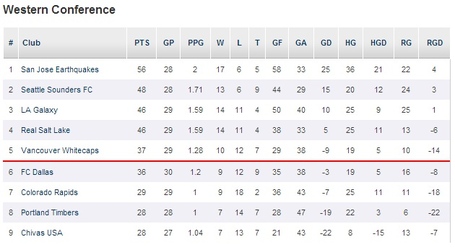 The only pesky thing is that little number that says 29 for Vancouver and 30 for FC Dallas. It's such a small number, but the difference is so huge.

First things first, if Vancouver gets to 48 points, this thing is over. That means three wins.

When I look at this schedule, one thing strikes me...that this Sunday's game vs Colorado could really go a long way to decide things. Should Vancouver beat Colorado, the pressure is majorly taken off the Whitecaps for their final three home games.Knowing that you need just six points from home games against Seattle, Chivas USA and Portland would be a huge load off their backs.

On the other hand, things could get very, very interesting if the Whitecaps fail to beat Oscar Pareja's side. Suddenly, you really need to win all three remaining home games and two of them are against teams you've never beaten before(Seattle & Portland).

If Vancouver doesn't take advantage of their game in hand, this thing likely goes down to the final couple weeks of the season and the longer it goes, obviously the more confidence Dallas will have.

I think the goal for FC Dallas through these four games is getting 9 points including two wins vs Chivas USA and then one massive win over a great team in the Western Conference. If you get to 45 points and let the chips fall where they may, I think you can live with that.

Something I find very interesting about FCD's schedule is that two of Dallas four games, at Chivas USA and at Seattle, will be played against teams coming off mid-week games. Dallas' game against Seattle comes after a crucial Sounders midweek match against RSL and is 72 hours before what could be a majorly important CCL game vs Marathon. Just something to keep in mind...

One other note, if FCD can get into the last weekend of the season with their playoff hopes alive, Vancouver plays at RSL the day before Dallas hosts Chivas USA. It's not fair, but Dallas will know if they control their own destiny heading into the final match of the season.

At the end of the day, it's September 17th and the playoff race is very much alive. I think we would all take that after the team had 3 wins through the first 19 games.