USA-Jamaica from the American Outlaws section

Share All sharing options for: USA-Jamaica from the American Outlaws section

I always wanted to attend an important match for the US Men's National Team. Months ago, when I bought tickets to the World Cup Qualifier against Jamaica at Crew Stadium, I figured it would be a nice appetizer to future, vital live experiences with the Klinsmann's crew. After all, who would have guessed that the US would have only 4 points after one game apiece against Antigua & Barbuda, Guatemala, and Jamaica? Following last Friday's loss in Jamaica it quickly dawned on me that I was about to take part in a more desperate atmosphere than I had bargained for. Going in I was just as excited and terrified as the day my son first figured out how to climb stairs.

My wife, 10-month-old son, my brother-in-law and I set out from Pittsburgh with my friend Bear (who also joined me on my last trip to Crew Stadium) and his wife a little after 8 am on Tuesday. After 4 hours on the road we arrived at another friend's house, where we thankfully had a meal waiting for us that didn't involve a drive-thru. We had a nice, relaxed couple of hours catching up before the American Outlaws tailgate began.

While the boys were excited about the free food and beer on offer at the tailgate, the ladies decided they would rather find another way to spend the hours before the game with the baby. They dropped us off and we planned on meeting up just before the match.

As we reached the party we saw some frat boys huddled around an 8x8 post playing a game that involved a hammer, nails, and beer. A couple beers later I decided to join in. After a near-impalement and my earning the nickname "sniper," I decided to quit before any blood was drawn. This was also the point at which it became clear that the ladies were right to have kept the infant away from the tailgate.

Maybe I'm getting too old for parties that involve a beer line, but is it normal to station a speaker set to deafening 6 feet from the Budweiser? Besides, how important is music when the overwhelming majority of the crowd are dudes? The only moment the music seemed to impact the crowd was when they played the them from Team America: World Police, which prompted riotous response on every F-yeah. The food was pretty nice. A trailer rolled up around 4:00 and handed out burgers and bacon-wrapped hot dogs for the next three hours.

My impressions of the stadium and the match after the jump:

Side note: I saw thousands of fans in all sorts of get-ups at the tailgate and the match. Some were great, like the guy in Patton sunglasses, helmet, and corncob pipe. Some I just didn't understand, like the France kit with "Altidore 17" on the back. The best kit award goes to my friend, whose red and blue Klinsmann 18 Bayern Munich shirt was just perfect: 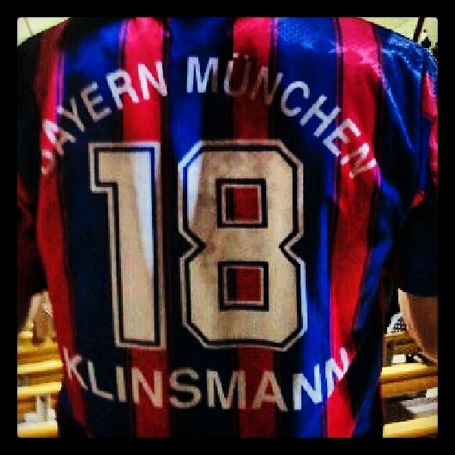 In my last roadtrip blog I noted the magic of Crew Stadium during a MLS regular season match, and it was even more pronounced for a USMNT match. 7 wins, no losses or ties, and all that. Holy ground for the US Soccer faithful. 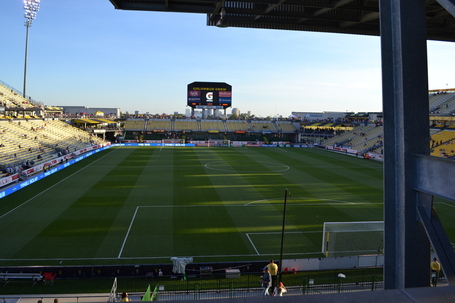 Every fan was handed a miniature flag as they walked into Crew Stadium and later slightly larger flags were passed around the AO section. We met up with the the ladies and my son at our seats, choosing a much higher vantage point than we could have just in case he freaked out and/or created an unholy stench that had to be attended to quickly. A small price to pay for indoctrinating an infant into soccer fandom. He enjoyed waving his flag around, and thankfully he didn't fuss or unburden his colon that night. Sorry if that's too graphic, but it was a major concern for both the car ride and the game and I'm overjoyed that the little guy didn't make things uncomfortable for a lot of people.

No hard feelings if you skipped to this section. I understand many will care mostly about the match and the American Outlaws experience. The supporters' energy was amazing, but it seemed to be fueled largely by desperation. The most obvious manifestation was in the "I Believe That We Will Win" chant. In the opening minutes, it very much felt like the Outlaws were trying to convince themselves and others that it was going to happen. Around 20 minutes in, it was a confident statement, but we seemed to be a bit too exhausted toward the end of the first half to bother predicting an outcome following the ridiculous saves and unlucky bounces kept the ball out of the net despite the US performance. 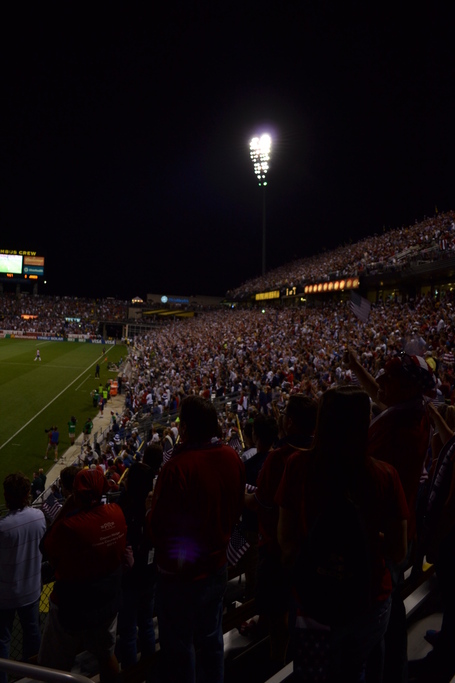 Everyone was recharged by the second half, though, and we were back to confidently cheering before Hercules Gomez' free kick. The mix of energy, desperation, elation, frustration, and awe stripped away my ability to analyze the match on the fly. Holding a 20 pound infant through half the game probably didn't help on that count, either. I can say that I was honored to be sitting behind the goal that was assaulted by the US over the first 45 minutes. Just an awesome display, even if they weren't able to get one into the net during that time. Checking twitter at half time I saw that many were moaning about "the soccer gods." Screw that. Yes, weird things can happen in this game of ours, but the US was so good on Tuesday that it was clear they would win unless they took their foot off the gas. Unfortunately, they did just that after getting the goal, which led to a whole lot of late-game nervous faces in the stands.

After the conversations my wife and I have had since the match, I am obligated to note the AO behaivior that may prevent my son from being allowed in a supporter's section again for quite a while. The biggest problems were a couple of isolated idiots that were running their mouths in an offensive manner as often as they could. Hey, I'm no Puritan, but I draw the line well before scream "Suck my nuts, FIFA!" A dozen times during the pregame Respect Campaign ritual. I got the feeling this would have been this blockhead's reaction to anything overtly FIFA-related. FIFA discourages racism: "Suck my nuts, FIFA!" FIFA provides aid to homeless AIDS victims: "Suck my nuts, FIFA!" The same guy yelled "Take that Afganistan!" After the 9/11 minute of silence. At one point, his friend turned to him and said, "I just can't pretend you're funny anymore."

The other special moment was when a few Outlaws threw their beers in the air after the goal. Not only was this a waste of perfectly good cerveza, but it made others uncomfortable during a moment that should have been pure celebration. Look, I'm against soccer stadiums cracking down across-the-board on "offensive language" (however they define that), as Columbus, Dallas, NE, and Colorado have been known to do. I don't think anything goes once you have a ticket, though. There has to be a middle ground. Organizers and fans should have open conversations where neither threatens expulsion or walkouts. A standard both can agree on would be a very good thing. Instead management and fans sometimes seem to be fixed at extremes, and unable to rationally discuss even something as silly as the YSA chant.

Didn't mean for this to turn into a rant about AO behavior, because by-in-large it was great, and everyone in my party thought that standing in that section was a phenomenal experience overall. In fact, I think we all agreed that it was the best time any of us have had at a sporting event. If you ever get the chance to attend a World Cup Qualifier with the AOs, especially in Columbus, do it.

The "I Believe..." chant illustrated desperation again in the last 10 minutes, though. After the performance the Yanks had, it was maddening that one bad bounce could have put them right back into a horrible qualifying position. Stoppage time in the second half was transcendent, though. The crowd had been loud throughout the match, and I was amazed to hear all 24,000 find another level to power the boys home. Just phenomenal. Here's a panorama I took minutes after the match ended (click for a larger version):

Thank God that Bear was willing and able to drive us back to Pittsburgh that night. I was completely spent emotionally, physically, and mentally. We made a brief stop to satisfy my brother-in-law's unyielding passion for the chicken tenders of Raising Cane's, which do not have any locations in Pennsylvania. After everyone dug in, Bear turned onto I-70 and headed for Pittsburgh. I tried to craft some tweets to sum up the experience, but was incapable of fitting any aspect of the experience into 140 characters. Pretty quickly I decided there was little point in my doing anything but try to sleep, which I did pretty well over the next 3 hours in the back of Bear's van. Thanks for reading my rambling my attempt to sum up an indescribable day in 1550 words.