Day two of the Portland road trip and in a frustrating turn of events, it was the hottest day the city has seen in three years. 102 is a normal day here, but when you see them complaining that the high is going "cool off to 88" you realize just what kind of weather you missed as the plane leaves to head back to Dallas.

Saturday morning started off a bit slowly after the pub crawl the previous evening, but today was earmarked for exploring outside of Portland. We hopped in Michael's car(which he had not driven for a couple weeks...must be nice) and headed towards the mountains.

You know you're getting outside of the city when you see a Wal-Mart. That place would be firebombed in the Portland city limits, there's no doubt about it. Our first stop was Vista House on Crown Point. Just an incredible view of the Columbia River Gorge and a good stopping point. This area is probably 45 minutes outside of the Portland city center. 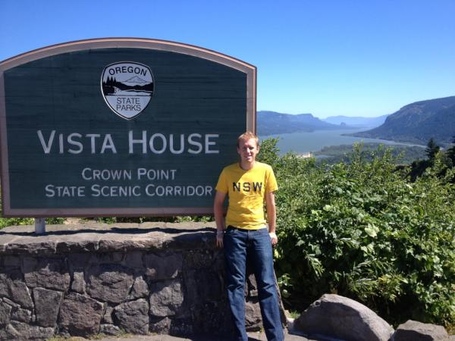 The next stop was Multnomah Falls which is the one of the largest waterfalls in the country. We actually couldn't get a parking spot on a busy afternoon despite making three passes at the parking lot, though I got a nice view from the car. It's a really big waterfall.

We stopped for lunch at Double Mountain Brewery & Taproom. The pizza was fantastic and I got to chuckle at all the locals melting from the heat. The dogs I felt sorry for, though.

From there it was on to the beautiful Mount Hood. This monstrosity is a huge part of the eastern skyline of Portland and I had to take a trip out here to check it out. The views are obviously beautiful and amazingly the mountain offers skiing and snowboarding year-round.

We decided to check out the Timberline Lodge, made famous by The Shining. It's a ski lodge celebrating its 75th year in existence and there's some pretty awesome stuff inside as well as a nice view of Mt. Jefferson. 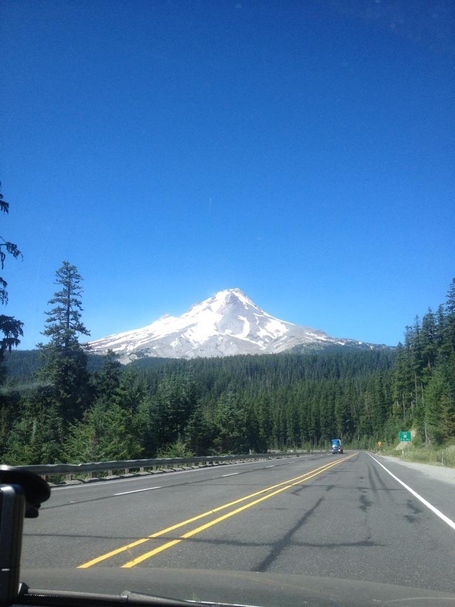 We headed back to Portland and walked over to Serratto, a nice and fairly upscale restaurant in Portland. I can't tell you how pleasant it is simply walking through the streets of Portland. Granted, we were walking through what seemed to be one of the nicest areas, a little bit north and west of Jeld-Wen, but despite the heat it was amazing to be in a city where everyone is so outdoorsy and simply walks everywhere.

As we walked to Serratto, we passed by an ice cream place called Salt & Straw which had probably a 20-25 deep line out the door and around the corner. You know ice cream is good if people are willing to stand in line like this.

After dinner, we decided to brave the line and I had what was certainly the best ice cream I've ever had. The time spent in line was definitely not in vain, I got cinnamon and snickerdoodle if you have to know.

I got a little writing work done after that, prepping for what would be an epic Sunday.