What is the Optimum Lineup and Bench for FC Dallas?

Share All sharing options for: What is the Optimum Lineup and Bench for FC Dallas?

With the signing of Jara today and the loan of Ruben Luna yesterday, it looks like FC Dallas is probably done with their player transactions for the season leaving just the 7 game sprint to the finish for Dallas as they try to sneak into the playoffs and make some noise in the Western Conference.

The team isn't drastically different than it was a month ago, they've only added two players and subtracted two homegrowns, but with injured players coming back and suspensions having been (mostly) curbed, it almost feels like new additions to the roster have been made.

So with seven games to go, what is the ideal XI for FCD and what kind of bench should they throw out there assuming everyone is ready to go? Here's mine 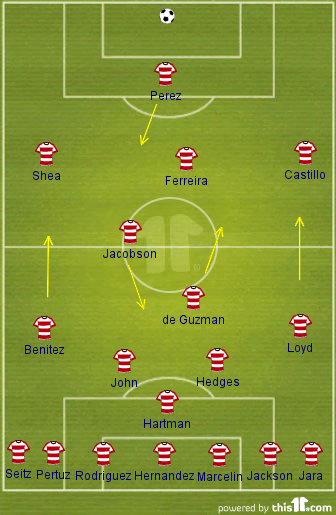 Also, you have to take into account the fact that Dallas is trying to win every game from here, a draw isn't acceptable, and the other fact that Jackson seems to generally be much better in the second half than the first half.

In the midfield, I chose Julian de Guzman over Daniel Hernandez and I think that one is pretty straight forward as well. The Canadian has been more than serviceable at the position and I think an underrated aspect of his play is how it seems to bring much better play out of Andrew Jacobson in front of him with a little less defensive duty.

The bench is kind of a tough one to decipher. With Ugo Ihemelu out for what should be the rest of the year, Hernan Pertuz is a slam dunk and you've really got a starting quality center back there in reserves which is obviously a huge benefit.

Carlos Rodriguez is definitely a slam dunk as he can fill in at all four flank positions and is a glue guy you have to have on the gameday roster.

Things get a little muddled when you figure out which defensive midfielder(s) to include as you've got three serviceable ones in Daniel Hernandez, James Marcelin and Bobby Warshaw. I think Warshaw will end up being the most important of the three next season, but right now you're looking for experience and I think Hernandez is a guy that you need out there if you're trying to hold onto a lead in the last ten minutes while Marcelin also gets the nod.

Jackson and Jara are also obvious choices which leaves two big holes, a backup for Ferreira and a true backup for Andrew Jacobson. There's really no linking midfielder in this as if you have to bring Marcelin or Hernandez in, things turn decidedly defensive in the midfield, while as long as Ricardo Villar is injured and Bryan Leyva is not trusted by the coaching staff, there's really no one on the roster to sub for Ferreira.

Did I get it right, is there a different starting XI or bench you'd like to see?