With ten games to play in the season, FC Dallas was on absolute life support. A disappointing draw at Portland meant a gap of ten points between FC Dallas and 5th place LA with ten games to play while Vancouver was 11 points ahead. FCD needed to win their next two games to even be in the discussion on August 17, but that's exactly what they've done. So how does FCD get into the playoffs? Let's take an in-depth look at the schedules of FCD and the teams around them because simply counting points and games in hand misses so much of what's left in the season.

First a quick look at the table and then a few points.. 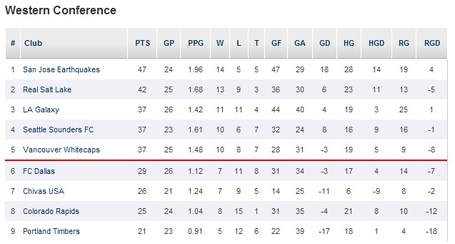 On Chivas USA Let's get these guys out of the way first. Yes Chivas USA sits three points behind FCD with five(!) games in hand. However, these guys just don't seem like that big of a factor to me. First, any team that got beat 4-0 last weekend is probably not a major contender, but second look at their schedule. Five at home and eight on the road to end the season. Also, two of the last three vs FCD and if Dallas doesn't get points from those games, they weren't going to make the playoffs anyways. Chivas is a small, small factor in things.

Who is most likely to be caught? Hands down, the team out of the three tied on 37 points that you should be rooting against is the Vancouver Whitecaps. Vancouver is sitting pretty right now and they would have put Dallas out of reach with a win last night, but things have changed, literally overnight. The Whitecaps, as previously mentioned, are a dominant home team, but they are about to embark on a ridiculous at Seattle, at Portland, at LA, at Dallas stretch over the next month.

Vancouver is 1-6-2 in their last nine road games and you really wonder if they'll get more than a point from the next three before heading to Frisco. This next month is when FCD can make up serious ground on Vancouver as the Whitecaps return home for four games vs Colorado, Chivas, Seattle and Portland after their to get the points they need. However, if things are within a few points heading into those final games, the pressure really mounts on them in those games.

For FC Dallas, their playoff hopes rest as much on Vancouver doing poorly over the next few games as Dallas excelling because the fact of the matter is if Vancouver manages to get 4 points from those three road games before Frisco, even if they lose to Dallas, they probably won't be caught.

Seattle and LA From a PPG basis, it's actually the Galaxy that is closest to FC Dallas. Kind of obvious, but the key for Dallas is not losing to LA next weekend. If FCD loses that game, the Galaxy will not be able to be caught. On the other hand, should Dallas beat LA, suddenly the Galaxy need to get ten points from their last 7 games.

They will immediately have Vancouver, Colorado and TFC at home after the Dallas game. They can very well get 9 points from that and it's over. However, should they stumble in any of those games it's at Colorado, vs RSL, at SJ, vs Seattle to close the season.

Seattle is almost impossible to be caught. 10-11 points puts them above FCD and even if Dallas wins both games left against the Sounders, two against the Timbers and two against Chivas USA make life a little bit easier.

Bottom line That means Dallas needs 17-19 points from 8 games. The home games left are Seattle, Vancouver and Chivas USA. Assume Dallas wins all three of those games, which they would have to if there's any hope. That leaves 8-10 points from @RSL, @LA, @SJ, @Chivas, @Seattle. Basically need to win 3 of those.

Clear as mud? Tough road ahead, but amazing that there's still even a discussion considering FC Dallas went THIRTEEN GAMES without a win this season.