Share All sharing options for: Scratching the Chalkboard: Toronto FC at FC Dallas

After rehab of 2 separate injuries, Wednesday night was David Ferreira's first time to play a soccer match in 15 months (discounting the game and a half of preseason action). This was obviously the major storyline for Dallas fans, but how did he perform over his first 38 minutes back? Before the season (when it looked like he'd be healthy for the opener), I wrote an article comparing FC Dallas with and without Ferreira last year. Today I compared the 270 minutes of Ferreira statistics from my research for that article (adjusted to a per 38 minute pace of) to his 38 minutes Wednesday. As you can see, he is already remarkably similar to his old self in passes (both volume and percentage), and crossing percentage: 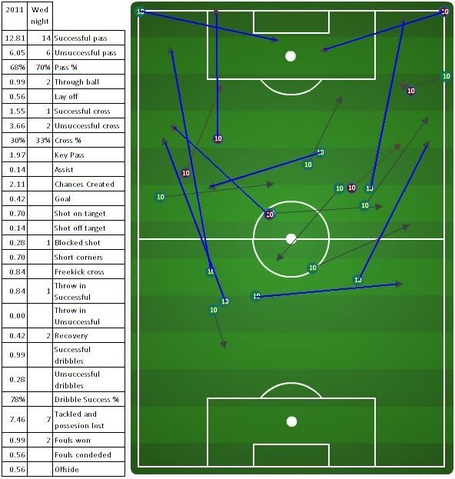 Some of the places we see a drop-off are, unfortunately, the most important. In his 38 minute return, Ferreira didn't create a single chance, his only shot attempt was blocked, and he didn't even attempt to take anyone off the dribble. The aggressiveness we see in his passing chart is very heartening, though. I drew a blue line over every 30+ yard pass. As you can see, he completed 7 of 10 passes at that difficult length. Also, 5 (4 complete) of the long passes propelled the offense toward the opposition goal. He clearly still has the vision and ability to pick out a teammate at distance.

38 minutes is a miniscule sample size, so take all of that with a grain of salt. However, there are definite signs of the old Ferreira here, and if he can begin to consistently play up to his standard, the rest of the season should be fun to watch.

Daniel's 1st Observation - Passing Inefficiency Out of the Back

Against Houston and Chivas USA, I thought FC Dallas played some of their best soccer of the season and certainly deserved to win both games. When you look at the stats from those performances, FCD completed 79% of their passes in those games, tied for the highest percentage of the season while completing 398 against Chivas, also the highest number of the season.

Against Toronto, the passing efficiency went into the toilet. FCD completed just 257 passes against Toronto, their second lowest amount in a home game this season behind only the 2-0 loss to Colorado where FCD went down to 9 men in the first half.

There is blame to spread around the field, but the majority starts at the back. Against Chivas USA, Hernan Pertuz and Matt Hedges completed 126 passes while turning the ball over just 10 times. Now that is a ridiculously high amount of passes and remarkably low turnover rate, but still the TFC game did not measure up. Pertuz and Hedges combined to complete 49 passes last night, less than either did by themselves against Chivas USA while turning the ball over 24 times, more than triple the turnover rate from the last game.

Once again, there were promising signs amidst a frustrating result. FC Dallas won 60% of the duels (the effort is still there), had 52.5% of the possession (further transition from the early season's counter-attack-only tactics), but shots appear pretty even... until you look deeper. Key passes are defined as "a pass/cross that is instrumental in creating a goal-scoring opportunity." Add that figure to assists, and you have Chances Created, a measure of every pass that moved the team directly toward a shot. On Wednesday, FCD created 10 shots and TFC only created 4. Then how did FCD only have 3 shots on target and 4 off, while TFC had 4 of each? Toronto did manage to block 5 Dallas shots, 4 of which were inside the box. Also, all shots aren't created equal, and when you look at the to teams' shot charts, you clearly see the Dallas had the much better chances simply based on distance and angle of Toronto's attempts: 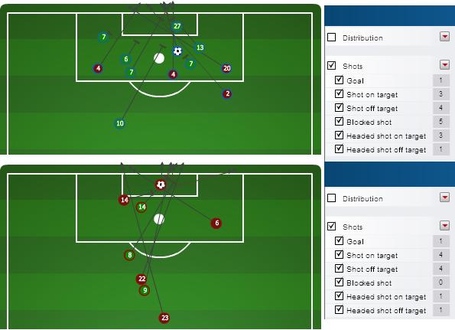 If FC Dallas can continue to create chances like this when Blas returns and/or they sign another dependable striker in the transfer window, goals could well follow in bunches.

I thought Brek Shea was fantastic in his return to the pitch after a month out against Chivas USA. Shea logged six shots in the match, three times as many as the Chivas team, and they weren't speculative efforts either.

Against TFC, Shea was completely ineffective as a lone striker, despite his tireless work rate. Shea logged just one shot in the match, a miss in the 18th minute, and moved deeper into the midfield as the match went on as seen in the times of his distributions which come mostly in the 30th minute and after.