I've slacked, terribly, at doing these for each game as of late. But I'm back to give you all a scouting report of tomorrow's opponent. FC Dallas hosts the LA Galaxy tomorrow evening on NBC Sports (for those of you who can't make it to Frisco).

Dallas is coming off it's biggest win since last summer. A week ago, FCD blanked the Portland Timbers in a 5-0 romp. Goals came from all over and everyone on the field seemed to be playing at a higher level than they had all season long.

LA comes into this game as winners of three out of their last four including a 3-1 win last weekend over Chivas USA. LA has been on a bit of a run since the June FIFA break to be exact. The big names there like David Beckham, Landon Donovan and Robbie Keane have been stepping it up all over the place and are the reason why the Galaxy are now just points out of moving up into third or forth place in the Western Conference standings.

1. What will LA do without Donovan? This one is the biggie on the weekend for LA. Donovan is out on yellow card accumulation - a fortunate break for FC Dallas. Donovan had been absolutely hot in his last few games by scoring three goals and adding three assists in the last four games. Production has been higher from Donovan since he moved from the flank position into the strike role beside Keane.

LA will either have to turn to someone like Mike Magee who is returning from injury, or Chad Barrett, or even young teenage sensation Jose Villerreal. The home grown player for LA scored a beautiful goal in a 2-2 draw in Vancouver last week and has shown well in his limited time over the last few weeks.

But no matter which way you spin it, no Donovan really hurts this club.

2. Will Omar Gonzalez go the full 90? Another big question for the Galaxy coming into this game. Gonzalez played 60+ minutes on Tuesday against EPL side Tottenham - his longest run since coming back from his nasty knee injury. Most out on the west coast believe the Dallas-native should be good to get a start and go the full 90. Now whether or not he is really "back" to his old self remains to be seen. Still, having him back is a big upgrade for a defense that has been leaky this season.

3. The David Beckham situation. Boy, how does he do it? In this week alone he has gone from LA to London to Philadelphia back to London and now possibly to Dallas. Bruce Arena has kept a tight lid on whether or not Beckham will play tomorrow night - less than a day after he does whatever in tonight's Olympic Opening Ceremonies. My gut tells me he returns and plays - possibly even the full 90.

Should he goes Dallas just has to make sure he doesn't get a ton of room to do his thing - spray balls all over the field to guys like Keane. Just the little bit of space around the penalty box and you know he'll take a shot too. We saw that in Portland a couple weeks ago when the Timbers allowed him a ton of room and he took full advantage of it by scoring two goals.

Let's face it, if Beckham doesn't go, it all comes down to Keane and what he can do offensively for the Galaxy. We know LA has the talent to pick up the pieces but replacing Donovan and Beckham in one game is going to be very difficult to do. Keane will have to be the guy to keep this run going. 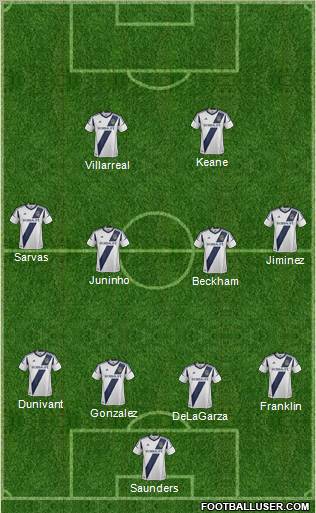 Notes: A couple guesses like Todd Dunivant returning. Bryan Gaul started in the last game against Chivas. The rest should remain the same though.

This one is a big one, no doubt about it. LA has been playing very well lately but then again Dallas has too. The no Donovan factor is huge though and if Dallas can keep the pressure on from the start by spreading the Galaxy out and making them chase the game, then they'll see success like they did against Portland. It won't be a big 5-0 outburst but goals will come if they apply the pressure and let David Ferreira do his thing.