Share All sharing options for: Scratching the Chalkboard: FC Dallas vs Portland Timbers

Saturday's blowout win is obviously going to have a lot of inflated numbers that are not normal as the Timbers were simply awful. Still, there's a few things we've identified that were key to Dallas' success.

Something Dallas tends to struggle with is teams that play a very high pressure system that forces a lot of turnovers. As we all know, Jair Benitez is prone to getting caught on the ball and caught out of position on the counterattack so the Timbers playing a low pressure style played right into Dallas' hands.

You've got to think that the heat, which was probably mostly in Portland's head, played a huge part in the coach's obvious decision to tell his teammates to back off. It's probably the main example of home field advantage that FC Dallas enjoys. Let's look at the affect of Portland's lack of pressure on the center backs.

On Saturday night, just the back four of Hedges, Pertuz, Benitez and Loyd completed 249 passes including an unbelievable 76 successful passes for Jair Benitez. To put that number in perspective, the entire FC Dallas squad completed 229 passes in last Saturday's win over Colorado. Now let's look at it in chalkboard form.

First, here is the passing chart of the back four from the Colorado game 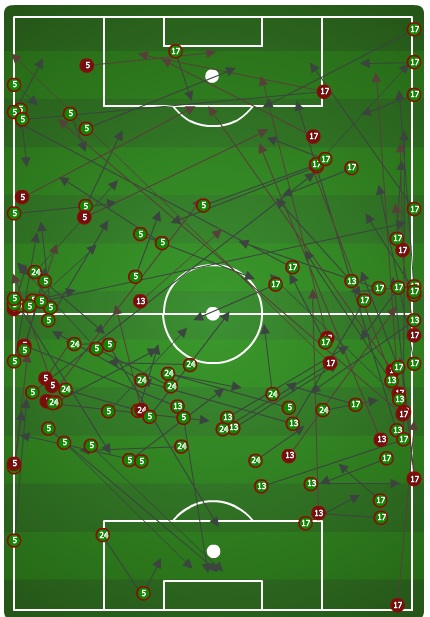 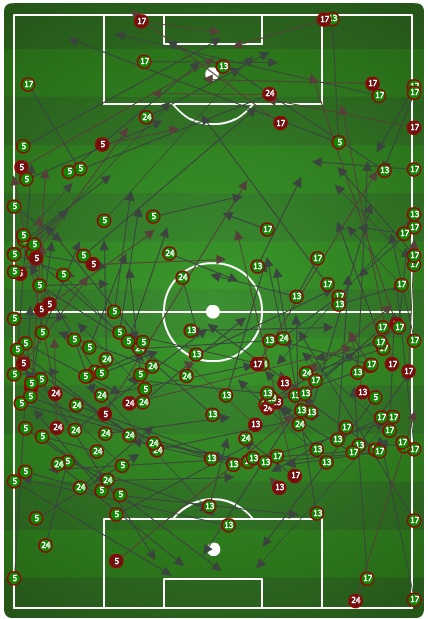 And now the back four passing chart from the Portland game 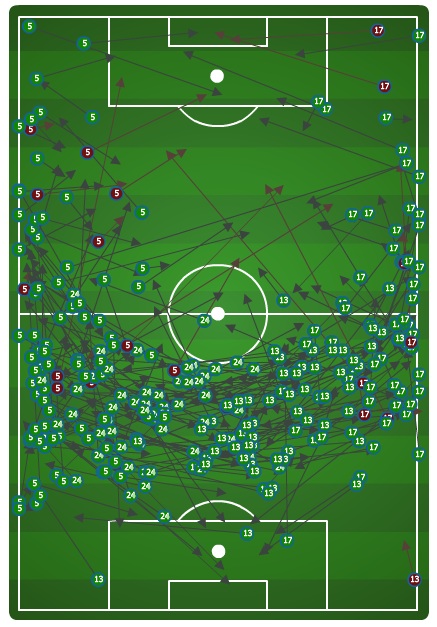 It's just incredible to look at that chart, how many passes were completed and the obvious strategy of the passes going around the back four and out to the wings. I've never seen anything like this in an FCD chalkboard this season. As a whole the passing numbers were out of this world on Saturday with 460 completed passes and just 68 turnovers...by far the most passes completed and best turnover ratio of the season. A team performance indeed.

Almost every Dallas player sprayed an overwhelming amount of passes while completing a high percentage. Even the few that had less statistical contributions, Scott Sealy, Ruben Luna, and Andrew Jacobson, were brutally efficient, and Hartman had almost nothing to do.
One of the reflections of the red stripes' dominance on Saturday is an oft-overlooked aspect of the Opta Chalkboard, the heat index. This is the number next to every player's name that represents the amount of ground they covered. Comparing the sum of Portland and Dallas players' heat index scores is... well it's funny for us and pathetic for Portland fans. According to the heat index, ignoring the keepers (whose distance ran is probably irrelevant) Dallas' players covered 29.2% more ground than all of the Timbers.

The most dramatic individual example comes from the two clubs' star players. David Ferreira had a heat index of 81 in 53 minutes, while Kris Boyd's heat index was only 7 in 33 minutes. Ferreira's contributions are in shades of blue and purple below, while Boyd's are green and red. Notice that 2 of Boyd's 5 actions in the match were kickoffs after Dallas scored: 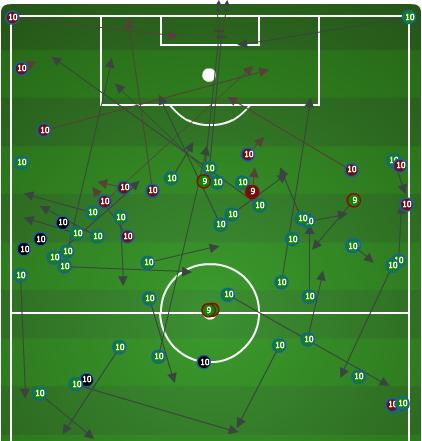 Schellas Hyndman dropped Daniel Hernandez to the bench a few weeks ago in a move that probably went under-reported due to people assuming it was simply a knee flareup. When Hernandez told me a couple weeks ago that the move was based solely on performance, it became clear that Hyndman was sending a message to his long-time captain that he needs to step up his game by benching him.

In Hernandez' last two games, he's been more than solid if not spectacular.

First, in the Colorado game, 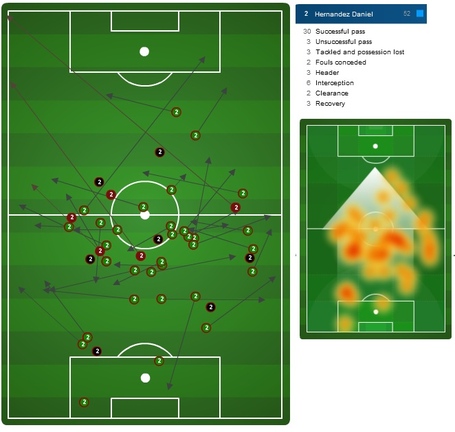 Then in the game on Saturday vs Portland 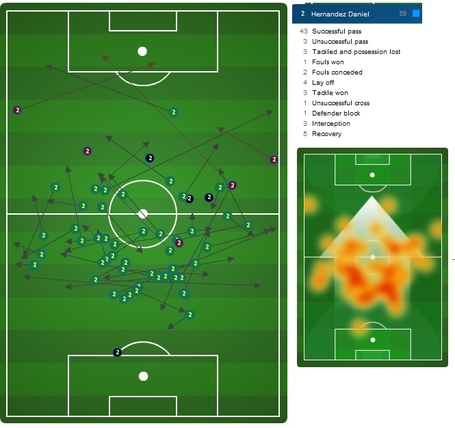 That's a combined 73 completed passes and 6 turnovers...I think those numbers are more than acceptable and it shows a player that is keeping it simple, not trying to do too much and simply doing the job that Schellas Hyndman asks of him. If Hernandez can keep this up, with JDG thrown in the mix as well, defensive midfield shouldn't be a problem for FC Dallas the rest of the year.