FC Dallas has had a nice run of late to pull things from panic mode to wait and see mode, but are they back into the Western Conference playoff race? Let's look at the standings 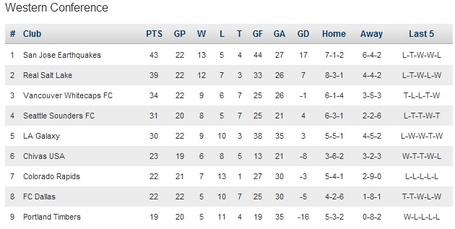 It didn't help at all that LA and Vancouver won this weekend in tough games vs Chivas and San Jose. The biggest thing is that Saturday's game against LA is must-win. Should Dallas lose that game, they're 11 points out of a playoff spot with 11 games left which will probably be too large to even dream of overcoming.

However, should Dallas beat LA on Saturday, they could very easily be within 5 points of LA & 6 points of Seattle(who have a tough game at Colorado) for the final two playoff spots.

When you factor in the upcoming CONCACAF Champions League for both sides, and two games left for Dallas against Seattle, things suddenly become very very interesting.

Everyone has said 48 points is the magic number which means Dallas needs to average roughly two points a game to get in the mix. With winnable games against LA, Portland and Colorado up next before a brutal three game road trip against Vancouver, RSL & LA...now is the time to get things done.

If nothing else, at least Dallas is still in with a shout and could make things VERY interesting in the next two weeks.