For all the controversy Julian de Guzman's acquisition drummed up, it seems odd that his first appearance and start for FC Dallas went by with very little fanfare. Of course, Brek Shea's immature bickering with his coach, and said coach's questionable PK decision had a lot to do with JdG's inconspicuousness on Wednesday. Part of it also comes down to the reports we've heard from Toronto before. Namely that while Julian is talented, neither his personality nor his play are as flashy as you would generally expect from a designated player.

In watching the game, I didn't take much notice of De Guzman positively or negative, so he seemed the perfect subject of a chalkboard study. What I see is a very acceptable performance for a player who had been working with his teammates less than a week. Below are his positive plays recorded by the chalkboard on the left, and the negative plays on the right (click to enlarge): 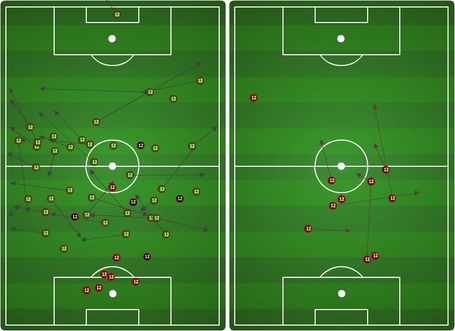 All points with arrows are passes, and other points on the left are defensive plays, fouls won, or his one shot (which was blocked off the line). Arrow-less points on the right are non-pass turnovers (he didn't commit any fouls or offsides). The positive plays look quite nice, showing that he covered a lot of ground and he completed 31/39 with very few of his passed the dump-to-whoever's-closest approach that we've seen from James Marcelin. 7 clearances, 6 recoveries, 3 tackles won, and 2 interceptions are nothing to sneeze at either.

De Guzman's negatives and my pick for Man of the Match after the break:

On the negative side, Julian did turn the ball over 6 times in the defensive half of the pitch. The intercepted cross-field pass at 37:17 and the dispossession just above the box at 68:50 are the most concerning. Neither were followed by a San Jose shot within the next 2 minutes, though. Also, his 68.49 ball recovery brings context to the 68:50 dispossession. This was more a case of JdG breaking up the flow of the San Jose offense, but being unable to clear the recovery than making a grave error in a dangerous spot.

Overall, it's hard to fault De Guzman's performance very much given his unfamiliarity with his new teammates and coaches. Wednesday was a somewhat promising start with room for growth, but also an indicator that his impact may be much more subtle than many would hope.

Man of the Match: Zach Loyd

No need to go into much detail here, as most FC Dallas fans are already well aware of Zach Loyd's value to this team, but take a look at his heat map and stats: 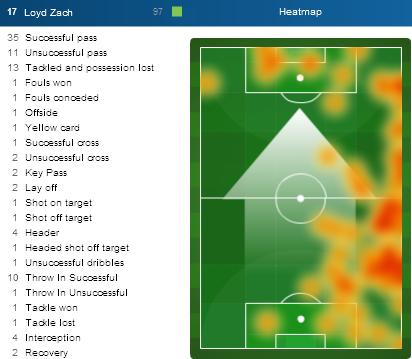 As usual, Zach was a tireless, positive influence on the match, with 2 chances created, a PK drawn (which only shows on his chalkboard as a Foul Won and a green dot inside the area), to go with his usual huge amount of ground covered, efficient passing, and defensive work. This was a solid workman-like performance from probably FC Dallas' steadiest player all season. There are numerous reasons to be annoyed about this team leaving Northern California without a point, and squandering Loyd's performance is definitely among them.